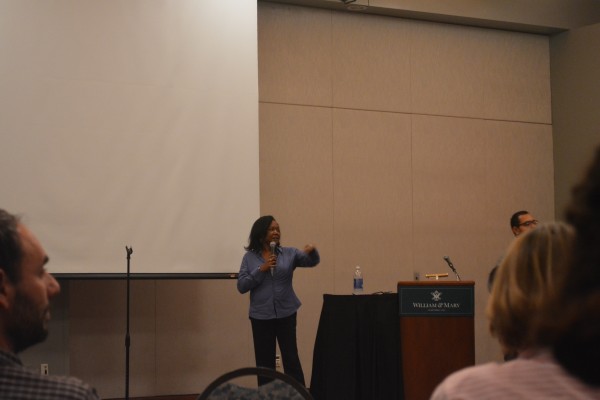 Reveley established the task force in the spring semester of 2015 to assess the racial climate on campus, improve recruiting of diverse faculty and senior administration, discuss racial insensitivity, and explore biased reporting.

Glover began by discussing the background of the Task Force and encouraging students to bring their experiences at the College concerning race to the administration’s attention.

One student at the law school, who requested anonymity to maintain privacy, said that her experience at the College has been mostly positive, but she has encountered racism and derogatory messaging. She spoke about a recent party hosted by law students about Hurricane Joaquin.

“They made a Facebook group about it, and the cover of the Facebook group was a picture of a naked black girl that was part of the [Hurricane] malt liquor ad,” the anonymous student said. “The feeling of isolation — it was so dismally miserable because one, I was the only black person invited to that party, and two, I was the only black woman invited. And the thing that hit the nail on the head is nobody said anything.”

The student said the host was a law school student she knew well, and after talking to him about why she perceived the photo as insulting, he apologized and changed it.

Students made the distinction between racial macroaggressions — overt or large-scale acts of racism — and microaggressions — small-scale verbal or physical interactions that may not have malicious intent but can be interpreted as racially derogatory. Several law students said that they agreed that most of the racial adversity they encountered was of the latter group, while stating that overt acts of racism did occur.

Diana Hernandez Ed. ’17, a member of the Task Force, discussed her experience as a minority student at the College.

Hernandez noted the opening of six tenured positions at the School of Education and the importance of recruiting minority professors for the positions. She said that the current lack of diverse faculty impacts the education of diverse students.

“We just recently met with our dean and the message at the School of Education was limited resources,” Hernandez said. “That’s really hard as a student to take in when we are embarking on the Billion Dollar [Campaign] project, and so I don’t want us to deliver an inconsistent message to our outside community.”

“There is competition for minority professors because there aren’t as many in the pool yet,” Reveley said. “But it’s something we have to work at assiduously and resources of course would help, but we need resources on all fronts and we ain’t got a billion yet.”

Willie Wilson J.D. ’17, discussed her experience as a minority student in the law school. She said that she felt extra pressure to contribute during discussions of racial controversy.

“We have to carry a burden or we have to consciously refuse to carry the burden. That’s a whole different thought process a minority student has to go through,” Wilson said. “And I don’t like it, but when you talk to people outside of law school about it, they say you’ve got to do it.”

Reveley and Glover thanked the students for attending the forum and sharing their thoughts.

“Don’t let this be the last time you reach out to us,” Glover said. “If something else comes up and you want to let us know about it, please do because your voices need to be reflected in our recommendations and our report. You’re feeling the heavy weight and the burden and if there’s any way we can lift it, we want to do that.”

Editor’s Note (Dec. 6, 2016): An earlier version of this article included the name of the student who spoke about her experiences at the law school. After publication, the student requested anonymity, which was granted.