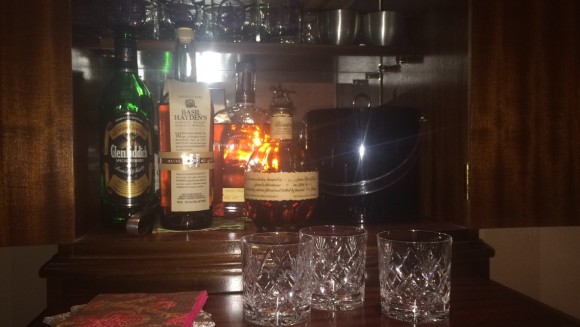 When I was about 12 years old, I furrowed my brow, tilted my head and looked up at my father with his silvery grey hair. “Dad,” I said, “we can’t have Christmas without a trip to the liquor store.” His cornflower blue eyes, more steely than ever in the winter months, laughed.

Before you become concerned with my parents’ ability to raise a child, allow me set you at ease. Alcohol — wine, beer, cider or spirits — adds brilliant levels of depth to recipes, especially the baked goods and protein that appear on Thanksgiving and Christmas tables. My parents had always permitted a glass of wine at dinner and a sip of a cocktail on occasion as a child — both of which are legal for a minor in private residences. The regimen did, after all, land me at the College of William and Mary, so my parents must have done something right.

My parents had always permitted a glass of wine at dinner and a sip of a cocktail on occasion as a child — both of which are legal for a minor in private residences.

The biannual holiday trek to the liquor store — once before Thanksgiving and another before Christmas — always fell to my dad. According to my mother, nice women shouldn’t go to liquor stores, especially on their own. The one exception to the rule is walking in to ask for large empty boxes. My father paints a vivid picture of the occasion when my mother, a barely five-foot tall elfin human, marched into the liquor store downtown with 10-month-old me in tow and walked out with a whole slew of boxes to prepare for our move to the house in which I grew up. She has since visited the liquor store maybe two other times in the last two decades.

Dad always took me with him on the two winter-time trips. Maybe he didn’t want me to acquire the liquor store stigmatization that my mother possessed; maybe he wanted to give me an education in alcohol so that when I went to college I would find cheap frat-boy liquor unpalatable. He succeeded in his mission, if either of those speculations hold any truth. He would turn the key in the Jeep’s ignition, I would throw my little limbs into the soft leather of the seats and clamber up to a perch. Then we’d be off in pursuit of bourbon in which to cook the cranberries and an array of spirits for eggnog, our joint culinary contributions to the cornucopia of holiday decadence.

Despite the old carpet with smudgy tracks worn across its crushed fibers and the odd smell of the commingling of cardboard and cigarette smoke, I loved the liquor store. Cut glass bottles of all shapes and sizes caught the flickering fluorescent light and refracted it so that each bottle shone like a gem in a jeweler’s case. The gins and vodkas glistened like diamonds, the liquors masqueraded as everything from the garnet of the Chambord to the onyx of the dark Bailey’s bottle. The bourbons, however, captivated me the most: their rich caramel tones glistened like estate brooches and rings studded with topaz. The bottles’ glamour reminded me of visiting the jewelry store on our main street and picking out a Christmas present for my mother. In a way, picking up ingredients and contributing our two staples to the array also constituted a gift to my mom, who outdoes herself each year with chocolate-laden confections, hearty side dishes and crisp decorations of evergreen and gourds throughout the house. We gave her a worry-free hour or two.

Dad would drive home especially carefully to avoid the clinking of glass — an arduous task in a town called “Little Rome” for its hills. We would tuck away the glistening bottles in a cabinet designed with compartmentalized drawers just the right size. The nicer varieties took their place in the dry bar that opened its delicate doors to guests when they walked into the house.

After these twice-yearly trips, the holiday festivities could begin in earnest. Each holiday cooking venture with my father always followed the same paradigm: he chastised me for dropping slightly squishy cranberries down the garbage disposal, I inevitably sprinkled everything in a three-foot radius around me with sugar, and we debated the quantity of spices. In the case of the eggnog, he thoroughly inspected the blending of egg yolks and sugar and ensured I hadn’t beaten the egg whites into inedible stiffness. Despite the regimens he imposed, we laughed quite a bit. Secretly, I think he enjoyed my sugar fiascos, when the counter’s dark granite donned a sparkling skiff of snow. The event allowed him to use a beloved quote: “Aim small, miss small: In cooking and in target shooting.”

A few hours later, a sizzling glass dish of bright fuchsia cranberries slid off the oven racks and into a cooling spot. The miracle of pebble-hard cranberries softening and mingling with the sugar to form a jam always amazed me. We poured bourbon over the concoction, and it bubbled like the Weird Sisters’ cauldron as the cranberries, hot as coals and red as embers, cooked out the alcohol and let off steam in waves. The eggnog, too, had its moment when we tasted the first drops of winter’s cheery nectar after allowing it to cure for a while.

I couldn’t have Thanksgiving and Christmas without either of these delights.

The cranberry jelly became a bowl of rubies in eggshell-thin creamware serving dishes and mirrored the brilliance of the petit silver ladle that cradled them onto plates. Chilled eggnog caused condensation on shiny pewter Jefferson cups with various engravings; a swirling curlicue of a monogram pirouetted across mine. Both confections sung the undertones of bourbon and the rich depths of holiday warmth. I couldn’t have Thanksgiving and Christmas without either of these delights.

Now, I call my dad each year and remind him not to make the liquor store trips without me. I’ll still be making that call when I’m 40 to tell him that I’ll be home in time for our father-daughter date presaging the best season of the year.