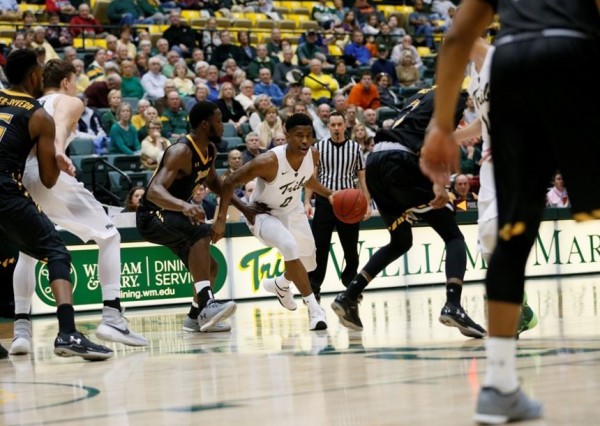 With 1:13 left to go in the first half Thursday afternoon, William and Mary held a 39-27 lead over Towson, the first game in conference play for both teams. By the time the final buzzer sounded, the Tigers had erased the double-digit deficit and clawed their way to a 76-69 victory in a game that exemplified the competitiveness of the Colonial Athletic Association.

“We kind of got punked today,” head coach Tony Shaver told Tribe Athletics. “We got outworked, and the much tougher basketball team won the game today.”

Consistency has plagued the Tribe (8-4, 1-1 CAA) for the early portion of the season, with the team sporadically appearing poised to finally get the school its first NCAA Tournament bid, while at other times looking sloppy and unsure on the court. Both good and bad stretches of play showed up against Towson, with the bad deciding the College’s fate.

The first 18 or so minutes of the game were promising, as the Tribe built up a lead behind strong performances on both offense and defense. For the half the College shot 51.7 percent from the floor, dishing out 12 assists, while holding the Tigers to a 34.4 percent shooting mark. Excellent bench play helped the Tribe get out on the right foot, with non-starters collecting 11 of the team’s 39 first half points.

We kind of got punked today. We got outworked, and the much tougher basketball team won the game today.

However, momentum took a drastic shift late in the half, as Towson poured in seven unanswered points to close out the period, pulling within five to start the second half. The Tigers kept their foot on the pedal in the second half, building up a double-digit lead of their own with 6:49 left to play.

“The end of the first half and the beginning of the second half were the ballgame,” Shaver told Tribe Athletics. “We were playing well early … then allowed them to score seven straight points to end the half. Came out in the second half, and we were just really bad, then played catch-up the rest of the night.”

The Tigers began to dominate the College down low in the second half, getting layups and drawing fouls. 26 of Towson’s 42-second half points came from inside the paint on 51.7 percent shooting from the floor, while 12 more came from the charity stripe.

Meanwhile the Tribe’s offense looked nothing like it did in the first half, shooting only 37 percent and getting no scoring off the bench. The most glaring statistic however was the turnovers. The College gave the ball away 11 times in the second half, resulting in 18 Tiger points. After the game Shaver discussed his team’s carelessness with possessions in the second half.

“Well you can’t defend it,” Shaver told Tribe Athletics. “It’s been a weakness of our team at times, not all the time … we had 11 [turnovers] as a team in the second half, and … they all end up in pick sixes, layups, and you can’t defend that. Very careless, maybe trying to do too much at times individually. We’ve got to trust our teammates, and today we didn’t do a good job of running our offense.”

With four minutes to play Towson held a commanding 68-56 advantage, outscoring the Tribe 42-17 since the 1:13 mark of the first half when the College was ahead by 12. In the end the Tigers did not relinquish, and William and Mary fell 76-69, their first loss at Kaplan Arena this season in their final game of the 2015 calendar year.