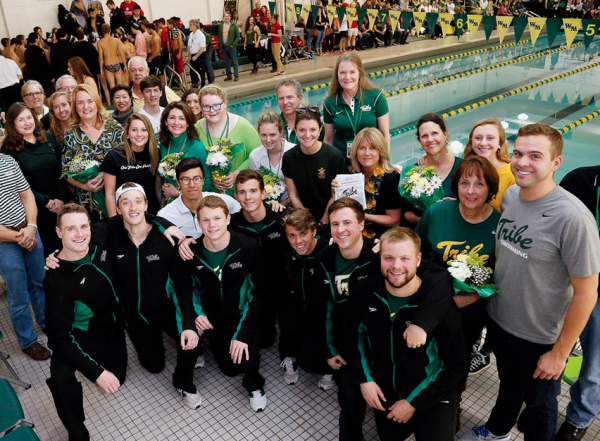 If rival men’s teams were waiting for the reigning Colonial Athletic Association champions to falter before the February races, they’ll be waiting a while, as William and Mary continued its strong season with triumphs over George Washington and Davidson in both the men’s and women’s categories. The George Washington meet took place Jan. 9 in Washington, D.C., where the men’s team won 178-96 and the women claimed victory 164-106. The Tribe hosted Davidson in Williamsburg, Va. Jan.16,  the women winning 172-87 while the men dominated 191-68. The women placed third in the CAA last year.

Both Tribe squads won despite their usual disadvantage of having no diving team. On the women’s side at George Washington, the College found itself in a 26-0 hole as the Colonials capitalized on their diving team. It was no matter for the Tribe, who set on a course to win nine of the 14 categories to claim the meet. The Tribe relay won the 200-yard medley relay with a team of junior Sophie Rittenhouse, sophomore Annie Valls, sophomore Jess Crowley, and sophomore Abby Mack. The relay team finished with a time of 1:47:82.

Junior Jaimie Miller’s performance stood out among a plethora of excellent races for the Tribe, as she set a lifetime-best time of 5:08:02 in the 500-yard free.

Freshman Eric Grimes took the 1,000-yard free, while the experienced members of the Tribe carried the team the rest of the way to victory. Manion claimed the 100-yard free with a lifetime best of 1:40:44, while seniors Justin Barden and Andrew Nyce added three more events to the College’s win column, while sophomore Tommy Kealy added two events of his own.

The Colonials won their two events because the Tribe sent exhibitioner swimmers in, as William and Mary torpedoed the Colonials in a 178-96 blowout.

On the women’s side, William and Mary (6-3) put on a clinic of its own against Davidson, securing the 11th winning season in the past 12 years in a 172-87 showing. The senior class graduates with an 11-5 record at home, the best for any given class since 1991.

Rittenhouse claimed the 200-yard back, and sophomore Emma Merrill took the 400 IM in an overall dominating performance for the Tribe.

Up next for both Tribe squads is a tri-meet in Greenville, N.C. against South Carolina and East Carolina, scheduled for Jan. 30.