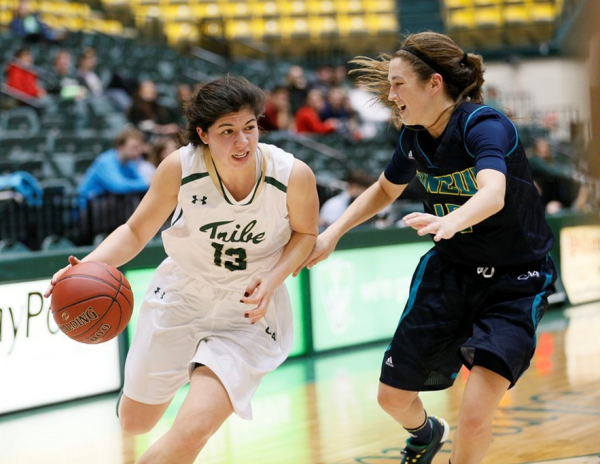 William and Mary buried itself early in the worst first-half performance in the last 33 games with a 67-63 loss to Colonial Athletic Association opponent Delaware in Dover, Del. Tuesday night.

“Delaware was real stingy on defense,” head coach Ed Swanson said to Tribe Athletics. “They really locked us up defensively, especially that first half. We couldn’t find any rhythm.”

The Tribe (12-6, 3-4 CAA) defense fought well to keep the game a low scoring affair, as the first quarter ended with a 13-10 score in favor of the Blue Hens (10-8, 5-2 CAA). Yet the College’s No. 1-ranked conference shooting percentage of 39.7 percent simply could not find the basket throughout the first half, putting up only nine points in the second quarter while Delaware added another 13 to the board, putting the Tribe in a 26-19 hole for the first half.

The 19-point first half marks the worst opening 20 minutes for the Tribe since last year’s 46-49 loss to Drexel, on the tail end of a seven-game losing streak. This year’s edition of the College looked to be past such low offensive outputs, already with five fewer games of under-60 point performances in 2015-2016 than in 2014-2015 at this point in the season — and three more wins to show for it. From the field, William and Mary shot just 23 percent and managed only 1 of 5 on three-pointers.

Coming out of the locker room, the Tribe sputtered throughout the third quarter while the Blue Hens added 23 more points. Delaware started to slip up with three minutes to go, but managed an 8-0 run to stay comfortably ahead. The College improved slightly, tacking on 17 points by the end of the third quarter. Gradual improvements simply wouldn’t be good enough for the visiting team, down 13 points yet again by a 49-36 margin. The defense showed signs of wearing out, reflected at the end of the game on the stat sheet. Although the Tribe leads the CAA in steals and blocks per game, Delaware led in both during this game, blocking six shots to the College’s two and snatching seven steals to the Tribe’s three.

William and Mary stayed within striking distance of the Blue Hens, finally rallying with an 11-5 run to close the gap to within five points with just under one minute to play. Junior guard Marlena Tremba snatched a steal, but freshman guard Bianca Boggs missed the ensuing shot. As the Tribe began to foul, Delaware continued to sink free throws. Despite scoring 27 fourth quarter points, the College lost its third consecutive road CAA game 67-63.

Although the furious comeback, fueled by a perfect 4 of 4 from beyond the arc and 53.8 percent shooting, fell short, Swanson still saw some positives in the team’s second-half surge.

“Margin of error is real thin,” Swanson said to Tribe Athletics. “Overall a great team effort … we have to put more efficient offensive possessions together.”

Despite the fact that Boggs’ shots didn’t fall in the final 30 seconds, the freshman put up a career high 18 points, eight of which came from the free throw line.

“[Boggs] was real aggressive today, she was attacking the rim” Swanson said to Tribe Athletics. “She can stop those [opponents’] runs by getting to the free throw line.”

Tremba marked another positive event for the Tribe, as she eclipsed the 1,000-point mark for her career with her 10-point performance in 31 minutes of action.

Up next for William and Mary is a home matchup against Charleston at Kaplan Arena, set for 7 p.m. Friday. The Cougars (6-11, 1-5 CAA) have lost nine of their last 11 contests.