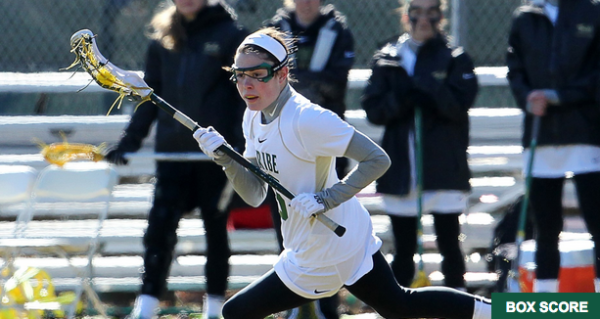 For the second consecutive season, William and Mary (0-1, 0-0 Colonial Athletic Association) faced off against No. 1 ranked Maryland (1-0, 0-0 Big Ten) for the season-opener for both teams, as the Tribe traveled to College Park, Md. for the Valentine’s Day matchup. Last season, the College welcomed the Terrapins to Williamsburg to start the season, losing 15-5 to the eventual national champions. As for William and Mary, the 2016 season is off to a similarly dismal start to last season, as Maryland consistently dominated in a 19-7 blowout.

The Tribe had a slow start to a rough game, allowing the first goal of the season 58 seconds into the action. Junior midfielder Shannon Quinn put the Tribe on the board with a score off an assist from sophomore midfielder Danielle Palmucci four minutes later, although the Terrapins still held a 2-1 advantage. The ensuing 4-0 run allowed Maryland to stay ahead for good just over nine minutes into the first half.

Sophomore midfielder Emma MacLeod, also a member of the field hockey team, notched the fourth goal for the College on a free position shot. Her goal was the second of the game off a Terrapin mistake, as sophomore attack Abby Corkum scored a minute earlier off a man-up situation. With MacLeod’s tally 18 minutes, 21 seconds into the game, the scoreboard stood at 7-4. Maryland responded by starting a 10-2 run at 15:21 that lasted until there was only 7 minutes, 50 seconds left in the game.

The Tribe suffered a 17 minute, 40 second scoring drought in the second period that definitively sealed the game.

With the Tribe’s history of struggling against ranked opponents, the Terrapins, seeking to three-peat as champions after national titles in 2014 and 2015, proved far too tough an opponent on opening day. The Tribe hasn’t won a season opener since 2013.

Maryland simply dominated on the offensive, pouring on 32 shots on goal (in comparison to the Tribe’s 12). The Tribe also lost the turnover battle, acquiring 13 to the Terp’s 21.

Despite the overall statistics, the Tribe’s effort was not quite the train-wreck the score implies, as there were some legitimate highlights. The Tribe held respectably strong on draw controls, winning 13 of the 27 total in the entire match. With the last season’s departure of Ellen Shaffrey ’15, this development in draw controls is encouraging for the 2016 Tribe. Shaffrey set the school record in the category, and  one of the questions entering this season was how the College would compensate for her production.

However, this minor parity in possessions could not save the day, and the Tribe fell 7-19.

The Tribe will look forward to its next chance for their first win of the season against Gardner-Webb in Boiling Springs, North Carolina, Feb. 17 at 5 p.m.