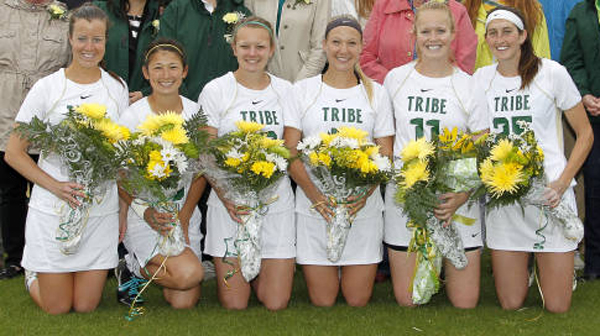 With five minutes remaining and another Colonial Athletic Association loss a foregone conclusion, the draw control flew out of the center ring. Skittering across the field, after numerous kicks and sticks whacking it left and right, the ball was finally scooped up by senior midfielder Ellen Shaffrey, shoving her way past James Madison players, for the new school record of draw controls in both a career and single season.

“I really tried not to think about [the record] because I knew that might jinx it,” Shaffrey said. “My teammates really set me up … it’s great.”

Shaffrey’s historic performance remained one of the few bright spots in the game, as the Tribe suffered a lopsided 16-7 defeat to nationally ranked CAA opponent No. 17 James Madison on senior day Sunday at Martin Family Stadium.

“I really tried not to think about [the record] because I knew that might jinx it,” Shaffrey said. “My teammates really set me up … it’s great.”

Off the opening whistle, the visiting Dukes appeared less than enthused to be playing lacrosse on such a rainy afternoon, conceding an early goal to sophomore midfielder Shannon Quinn off a free position shot just two minutes into the game. However, James Madison soon awakened to become its usual, dominant self, seizing a 3-1 lead ten minutes into the contest; the third goal rebounding back off junior keeper Meredith Crizer into the stick of another Duke for the follow-up shot.

The College managed to respond. Senior attack Sarah Gunter, a relatively new presence in the 2015 offensive lineup, passed to Shaffrey in stride. Though Shaffrey mishandled a similar opportunity at the crease earlier in the game, she cleanly caught the pass and fired into the back of the net. The Tribe trailed just 3-2.

Yet the next JMU shot marred what looked to be one of Crizer’s best performances of the year. The Dukes borrowed a hockey playbook, screening the goalie on the crease as a shooter rifled the ball from well outside the 8-meter arc. Crizer couldn’t find the ball ricocheting off the players in front of her as it slipped in the lower part of the net for a 4-2 JMU lead.

“We played really hard in the first half, we kept fighting back,” head coach Hillary Fratzke said. “They really have a lot of great offensive weapons.”

Whether muscling in at the crease or finesse passes to cutters, JMU’s offense continued to dominate in the next 15 minutes, building a 6-2 lead.

Freshman midfielder Danielle Palmucci passed the ball from behind the goal to assist Shaffrey’s second goal, then added one of her own with 34 seconds remaining in the first half.

The Tribe hasn’t beaten a ranked opponent or comeback from more than three goals on the entire season, and neither of those facts changed on Sunday. JMU added two more goals before Quinn, with the cuts and dodges that have become typical of her season, tacked on her twentieth goal of the season weaving through defenders at the crease, marking the score at 8-5.

The College never got any closer.

“We made silly mistakes that cost us the momentum we needed to get back in the game,” Fratzke said. “We couldn’t get a draw when we needed it … and that was the first time of the season we’ve been beaten out badly in groundballs.”

JMU finished with a 22-12 advantage on grounders.

By the 16:58 mark and JMU’s tenth goal, the contest was essentially decided. The Tribe pushed further back on its heels with Quinn’s ejection after her second yellow card.

Fratzke pointed to Richmond as a defining game of the 2015 season.

“Our backs have been consistently against the wall … we won [over Richmond] with heart and energy, and the seniors have done a great job in instilling that mentality of keep working and keep fighting,” Fratzke said.

Though the Tribe briefly celebrated Shaffrey’s record, the mood was dismal as the final whistle blew in the pouring rain, in the 16-7 defeat, yet another disheartening loss on the season. William and Mary finishes 2015 at 5-11 and 1-5 in conference play, marking four straight years with win percentages below .333.

All momentum from a midseason four-game winning streak dissipated into a 1-7 streak in the final April stretch. The Tribe was outscored on the season 196-158, the average loss by 7.27 goals. The College has trailed in 65 percent of the season, playing on the wrong side of the scoreboard for 631 of the 966 minutes of game time.

“With Hillary’s second season, we’ve made strides … but you have to take baby-steps to get where you want to go in the long-run, and though it wasn’t this year, it’s coming up,” Shaffrey said.

“With Hillary’s second season, we’ve made strides … but you have to take baby-steps to get where you want to go in the long-run, and though it wasn’t this year, it’s coming up,” Shaffrey said.