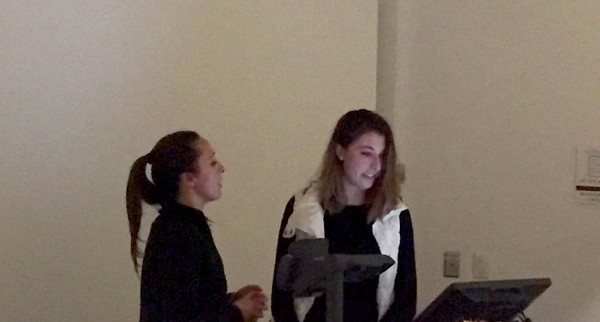 Having missed the crucial deadline of spring add/drop, The Save the Future of Humanity from Excessive Textbook Expenses bill will not be brought again before the senate, Student Assembly senate chairman Dan Ackerman said Tuesday. A new resolution, however, introduced by Sen. Danny O’Dea ’16 during Tuesday night’s Student Assembly senate meeting, calls on SA to advocate for the use of Open Educational Resources and the programs expansion for Academic Departments on campus. Unlike the textbook bill, which was tabled indefinitely, the resolution will not allocate any funding.

In addition to recommending SA advocacy, the resolution also encourages stronger communication between professors, administration, the Board of Visitors and the student body to further advances regarding eBook access and open resources.

“This is part of an ongoing discussion we have had all semester,” O’Dea said. “This is a resolution that we wrote up declaring the Student Assembly’s support for looking into Open Educational Resource textbooks as an option and moving forward with plans that are already in place to reduce the costs for students on campus in terms of textbooks.”

During last week’s meeting Dean of University Libraries Carrie Cooper and Digital Scholarship Librarian and Arts Librarian Kathleen DeLaurenti asked the senators to sign a pledge in support of open resources, to provide funding to award faculty who go above and beyond in making their materials open resources, and for funding to help supply more courses with OER books. This new senate resolution is the SA’s response to those requests as the resolution aims to promote awareness on campus.

The conversation on textbook affordability stems from a campaign promise made by SA President Yohance Whitaker ’16 and Vice President Catie Pinkerton ’16 last spring. The first attempt at fulfilling that promise — the Save the Future of Humanity from Excessive Textbook Expenses bill — originally skipped the committee process because Whitaker and some senators wanted to pass it before the spring registration add/drop period was over. 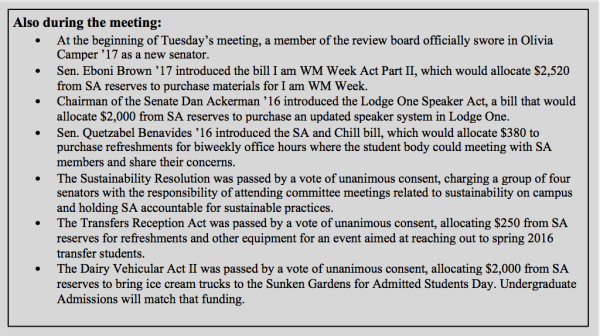 At the time, Whitaker spoke to members of the senate on the benefits of passing a bill that would allocate $5,050 to moving more courses to OER materials.

“In terms of wanting to get this done before add/drop, we are still in the period of time where students are formulating their schedules,” Whitaker said at the time. “We have a grace period where we can have some action on this. It is important to be ahead of add/drop because once students have their schedules formalized, very soon after is the process where they go and buy their books.”

After a lengthy senator discussion driven by concerns over the sustainability of the bill, senators voted to move it into old business. In committee meetings the following weekend, informal amendments were made to the bill that reallocated the $5,050 to the psychology department. However, the bill has not been discussed at any senate meetings since then.

According to Chairman of the Senate Dan Ackerman ’16, the bill will not be introduced again in old business. If is brought up again, it will be reintroduced as a new bill with new clauses. Senators tabled the bill because it is no longer time sensitive.

While the bill introduced Tuesday is meant to replace the previous one, it will not allocate any funding to the library to purchase OER materials. According to Ackerman, this is partially because of an increase in private donors interested in supporting this process.

Ackerman assigned the resolution to the policy and student affairs committees and will be discussed in old business at next week’s meeting.