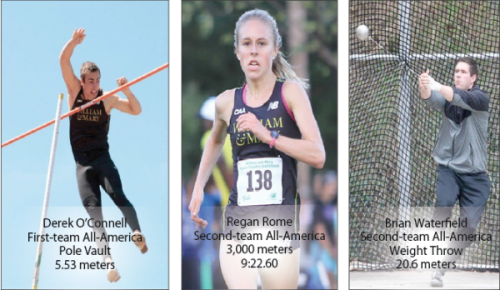 William and Mary track and field closed out the indoor season with a strong, memorable pair of championship weekends.

On March 6 at Boston University, the women’s team finished 21st in the Eastern Collegiate Athletic Conference Championships, while the men finished fourth in the Intercollegiate Association of Amateur Athletes of America Championships.

The women’s team sent 10 competitors to ECAC’s, with five women earning All-East honors, awarded to those who finished eighth place of better.

Three of the performances honored were in the throws. Sophomore Leia Mistowski finished fourth overall in the weight throw at 17.67 meters, resetting her own school record in the process. Redshirt-junior Rochelle Evans took eighth in the event with a throw of 16.68 meters. Then in the shot put Evans earned her second All-East award of the meet with an eighth-place finish with a throw of 13.40 meters.

The Tribe also ran well on the track. Senior Meghan McGovern placed third in the 5,000-meter race with a time of 16:38.47. In the 500-meter dash finals, sophomore Kacey Wheeler, after having already ran a lifetime best in the prelims, ran a second one with a time of 1:14.19 to finish in eighth place. Junior Molly Applegate placed ninth overall in a lifetime-best race of 9:41.41 in the 3,000-meter race, just missing All-East honors, while sophomore Molly Breidenbaugh finished 12th. Finally, the seasoned quartet of senior Breanna Brukalo, redshirt-junior Ashley Woodards, senior Leanna Eisenman and senior Meghan McGovern ran a solid time of 12:5.32 in the distance medley relay competition to finish 18th overall.

The women’s team finished 21st in the Eastern Collegiate Athletic Conference Championships, while the men finished fourth in the Intercollegiate Association of Amateur Athletes of America Championships.

William and Mary’s men placed fourth at the IC4A Championships in one of the best performances in Tribe history, and shared five All-East honors amongst the six events in which the College participated.

The day’s first win came in the shot put, where redshirt-junior Taylor Frenia won with a final throw of 18 meters, the furthest in William and Mary history by over 0.3 meters. Frenia is the first Tribe first-place finisher since 2013 and the first throwing event winner for the College ever at the IC4A Indoor Championships.

Redshirt junior Derek O’Connell won with a vault of 5.15 meters, the first pole vault win for the Tribe in 39 years. Together with Frenia’s win, this marks just the second time ever that the Tribe has snatched up multiple IC4A titles at the same meet.

Sophomore Davion Hutt finished second overall in the 60-meter dash with a time of 6.81 seconds. This ties his own school record and solidifies him as the greatest short-sprinter in men’s indoor history, as he has run the Tribe’s top-27 times ever in that race. Sophomore Dawson Connell ran 4:4.60 in the 16,000 meters for third place.

The team of freshman Ryan McGorty, junior Troy Sevachko and seniors Jomar Aryee and Ryan Gousse ran 9:58.93 representing the Tribe in a fifth-place finish in the distance medley relay.

On March 11 and 12, in Birmingham, Ala, three Tribe athletes competed at the NCAA Indoor Championships, and did not disappoint.

Waterfield solidified himself as the greatest indoor weight thrower in Tribe history, holding 13 records of the 16 throws in the books while closing the season as William and Mary’s first-ever NCAA qualifier or All-American in any indoor throwing event.

O’Connell competed in the pole vault, finishing seventh overall with a vault of 5.35 meters, becoming the first first-team All-American vaulter in Tribe history.

Sophomore Regan Rome finished 12th overall with a time of 9:22.60 in the 3,000-meter race. Her recognition as a second-team All-American is her second such accolade this year, having received the honor for her performance in cross country this fall.

Redshirt-senior Brian Waterfield finished 10th in the weight throw with a 20.60-meter throw to become a second-team All-American. Waterfield solidified himself as the greatest indoor weight thrower in Tribe history, holding 13 records of the 16 throws in the books while closing the season as William and Mary’s first-ever NCAA qualifier or All-American in any indoor throwing event.

The outdoor season begins this week as the College hosts the Tribe Invitational this weekend at Zable Stadium.