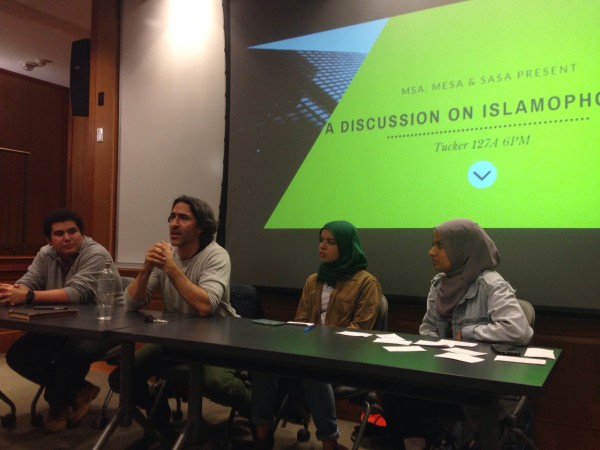 Sheehi argued that Islamophobia is a nuanced concept, and is a particular ideological phenomenon that is a relatively new formation in North America. He argued that while the United States does have a heinous and sad racial history, modern Islamophobia became prominent in the 1990s.

Sheehi outlined two different kinds of Islamophobia. There is cultural Islamophobia, he asserted, which is people’s misperceptions and stereotypes of Muslims, and there is political Islamophobia, which is based on national political discourse and policy. He argued it is possible to participate in one and not the other, because when terrorism is discussed at a national policy level, there is an Islamophobic implication that it is specifically Muslim terror against Westerners.

“While President Obama is not a cultural Islamophobe, he might actually participate in political Islamophobia, because he propagated many institutional, legal policies that really are predicated on the Muslim threat,” Sheehi said.

After Sheehi’s introduction, audience members were encouraged to ask ask questions. When asked about why certain similar religious practices are accepted in the Christian faith but are seen as threatening in the context of Islam, Sheehi said that privilege plays a significant role.

While President Obama is not a cultural Islamophobe, he might actually participate in political Islamophobia, because he propagated many institutional, legal policies that really are predicated on the Muslim threat. — Middle East and Arabic studies professor Stephen Sheehi

According to Sheehi, irrational fears make people fear Islam, in a way they don’t fear other religions like Christianity or Hinduism. He said that many people believe that while Islam itself might preach peace, mercy and justice, somehow it has a violent underbelly.

According to ElBardicy, the cases of violent extremism in political Islam are not representative of the Islamic faith.

“A religion is not violent, people are violent,” ElBardicy said. “And people are going to use whatever they want to try to justify their actions.”

ElBardicy further addressed particular obstacles that come from being Muslim at the College.

“It’s really hard when we get questions [about Islam] because we don’t even have a Muslim chaplain on campus, and we’re trying to learn ourselves,” ElBardicy said. “It’s so hard to defend something you still haven’t even fully learned about yourself, and to have to give that from a legal standpoint, when what you’ve been taught is a religion that teaches you morals and values.”

A religion is not violent, people are violent, and people are going to use whatever they want to try to justify their actions. — Yussre ElBardicy ’16

ElBardicy also spoke about how it is tiring to be expected to constantly defend the Muslim faith.

“[Islam] is not monolithic. To point to a single Muslim’s actions and try to say that they represent 1.6 billion people is preposterous,” ElBardicy said. “To cherry pick verses, take them out of their context and then try to say this is all it represents also is just ridiculous.”

Vohra also said that the expectation to defend her faith is often challenging.

“I can’t do it myself because I’m not a scholar, I can’t pinpoint the exact verse that’s been interpreted wrong and then try to combat it with my own knowledge, I don’t know,” she said. “But what I do know is that what I’ve been taught when I grew up learning Islam, and I think the most important think is to lead by your actions and by your example rather than trying to fight people on these small details.”

As Muslim women, ElBardicy and Vohra also discussed their personal experiences, especially with wearing the hijab.

“I’m obviously Muslim and everywhere I go I can feel the stares, I can feel afraid most of the time, especially here in Williamsburg,” Vohra said. “A lot of people have been taking off their hijab because they feel that hijab now doesn’t mean anything spiritual, but is rather a political act to assert your identity as a Muslim woman, and a Muslim person. I think it’s sad that something that is so spiritual and personal has become a form of political identity rather than something that’s supposed to be a really personal decision that you make.”

Sheehi said it is important to develop initiatives at the community level, and to continue the conversations that already exist. He argued that despite figures like Donald Trump and their media influence in perpetuating Islamophobia, there is more pushback from the cultural mainstream against Islamophobia than there was a decade ago. He said that while the media itself is not blameless, it is important to look at the general population as consumers of media, and for individuals to be aware of the media they consume.

The discussion did not shy away from racial elements of Islamophobia. Sheehi pointed to the intersections of multiple planes of discrimination that can exist for certain Muslims of color.

He argued that to combat racism, it is necessary for activist movements not to act in isolation.

“Muslim-Americans and Arab-Americans need to start making solidarity with other people of color, and they have been, and the Black Lives Matter movement has started to do this to, they’ve made ties with Palestinian Lives Matter, so there are ways to reach across other groups that feel other forms of racism,” Sheehi said.

The discussion ended with one Muslim’s student account of how important he felt it was to create a community where the issue of Islamophobia could be talked about, and to extend these communities beyond the environment of a college campus.