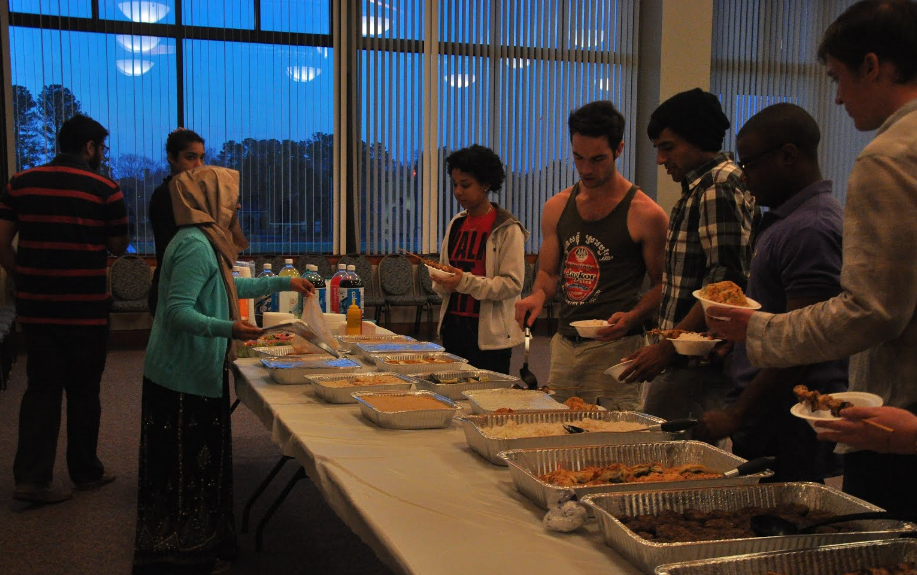 The day-long Fast-a-Thon was not for those with a weak stomach. Following sunset Sunday night, the student participants snatched up kebabs and spinach pies in the Sadler Center for their first meal of the day.

The Fast-a-Thon was the final event in the Muslim Students Association’s Islamic Awareness Week, which featured a host of activities and talks pertaining to Islamic culture and related subjects.

“This is our first year [holding this event], so we’re just trying to get it going,” Mahdi Blaine ’16, explained between bites of Middle Eastern fare. Blaine is one of many MSA members working to bring Islam into the College of William and Mary’s dialogue. “We want to get MSA back into the William and Mary club scene. It’s been in the shadows.”

The MSA kicked off the week April 1 with the hijab challenge. Students at the College were invited to experience a day swathed in a traditional headscarf.

“I actually felt really awkward in the beginning,” participant Leena Al-Souki, ’14 said. “At the same time, I was very conscious of the fact that I was representing a religion. I felt like an ambassador. I’m Catholic, so I had no experience with this.”

The hijab also took a central role in the next event, a panel discussion on Islamic cross-cultural perspectives held April 4. Faculty members and graduate students compared Islamic culture in India, Iran, Turkey and Indonesia. The panelists became passionate when conversation turned to the “inherent” connection between Islam and the hijab.

“Culturally, where I grew up we don’t wear the hijab, but it doesn’t mean we’re not religious,” Naziha Niazi ’14 said.

According to the panel, the hijab is often a choice, not an object forced upon Middle Eastern women. Yet the culture is changing. Women in Turkey are rapidly taking up the hijab. The panel exuded an almost-tangible tension, as the professors argued over rising religious extremism.

“I see an adoption of a very overt kind of Islam as a response to Western influence,” panelist and associate professor of history Chitralekha Zutshi said.

Historically, the majority of Muslim women in India have not worn the hijab. However, Zutshi noted that more and more Indian girls are taking up the hijab.

The speakers also differentiated between facets of Islamic culture, expressing frustration with a catch-all perception of the religion. Members of the MSA agreed with this sentiment.

MSA member Maab Yasin ’15 was extremely involved in planning the different events for Awareness Week and elaborated upon the misperceptions surrounding Islamic culture and how they fueled the choices in speakers and topics.

“I don’t think Islam is very prevalent here,” Yasin said. “Everything that is being taught about Islam mostly comes from the media. We wanted to show things that the media never shows. Islam is not one way that can take one extreme form. You don’t realize how much variety there is in one religion.”

Guest speaker Imam Mohamed Magid followed the panel, lecturing on the role of women’s rights in relation to Islam. Magid is president of the Islamic Society of North America and executive director of the All Dulles Area Muslim Society

“He made a really good point about how people have misinterpreted the Abrahamic religions and used it as an excuse to mistreat women,” Yasin said. “The important thing is to model your life after the Prophet Mohammad, and the prophet has always treated his wives with the utmost of respect. People should never say that Islam can be an excuse to oppress women.”

The MSA invited all students to start off their afternoon Friday with a khutbuh, or sermon, followed by a Jummah prayer session. The MSA, which holds this prayer session weekly, opened the event to the public for Islamic Awareness Week. Islam requires Muslims to pray five times each day, making it not only a religious rite, but a daily habit.

The week of Islam interaction ended for participants with a bellyful of delicious Middle-Eastern food. After a day of fasting, students met to learn about Ramadan. The MSA also presented a video on students’ thoughts on fasting, with opinions ranging from silly to serious.