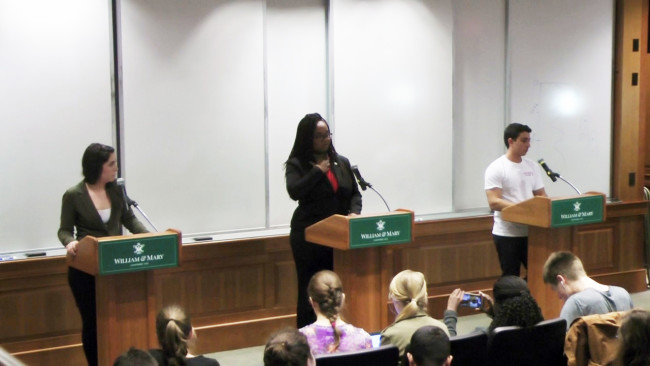 After almost two weeks of campaigning, the Student Assembly elections are just two days away. Placing the three presidential candidates’ platforms side by side, the SA Elections Commission held a debate Tuesday, March 22.

In opening statements, candidates focused on the reasons behind their decisions to run and key elements of their platforms. Presidential contender Justin Canakis ’17 focused on how he, an outsider to the SA, would succeed in that position.

“We are going to spice things up,” Canakis said. “We need flavor in the Student Assembly. It is a stale piece of bread with no flavor. We are going to bring energy and excitement to the SA. A.J. and I have experience working with money, we are the sriracha the SA needs.”

We are going to spice things up. We need flavor in the Student Assembly. It is a stale piece of bread with no flavor. We are going to bring energy and excitement to the SA. A.J. and I have experience working with money, we are the sriracha the SA needs. — Justin Canakis ’17

Throughout the debate, candidates elaborated on their platforms, especially those concerning diversity and transparency. Katherine Ambrose ’17 cited the website she and Liz Jacob ’17 launched last week as a prototype for the SA’s website. She also suggested initiatives such as proactive town hall meetings and SA office hours, citing a bill she co-sponsored in the senate, the SA-75. Expanding on this, candidate Eboni Brown ’17 promised to make SA as accessible as possible to reach out to students with less of a voice on campus. Canakis’ plans for transparency centered wholly on his proposed website, which he promised would be interactive, easy to use and fun.

When discussing diversity, Brown shared her personal struggles trying to feel like she was part of the College of William and Mary, as a student from a small town and a woman of color. Her platform was crafted with help from the Center for Student Diversity’s Vernon Hurte.

“Inclusion and diversity is a huge part of our campaign,” Brown said. “When I came to the College I felt underprepared for what William and Mary was like, I had doubts about whether I belonged here. Diversity really hits home hard for me, and I want to continue to make it more inclusive with one tribe, many perspectives.”

Brown cited her work with organizations that advocate for women of color, as well as the NAACP and the CSD, as proof of her commitment to working for diversity. During the debate she focused on including and promoting diverse perspectives, such as those of students with disabilities through student accessibility services.

Inclusion and diversity is a huge part of our campaign. When I came to the College I felt underprepared for what William and Mary was like, I had doubts about whether I belonged here. Diversity really hits home hard for me, and I want to continue to make it more inclusive with one tribe, many perspectives. — Eboni Brown ’17

Ambrose focused on redefining authentic excellence at the College to improve diversity, through changes to the College’s mission statement and diversifying statues on campus. According to Canakis, one of the largest problems on campus relating to diversity is that the College is often hypersensitive. He said he would improve the diversity of thought so that every student’s opinions were seen as legitimate.

Another focus of the debate was how each of the candidates would work with the City of Williamsburg to foster the relationship between the city and the College.

According to Ambrose, if elected she would work to further conversation between students and the City Council as well as lobbying for certain legislation in Richmond.

“This relationship is something that SA can take on,” Ambrose said. “We have a student running for City Council, we have students involved in Williamsburg, but student involvement in all matters the city takes on is lacking. This could be solved with a policy of open accountability, becoming advocates, and talking with city legislators. We would also love to see William and Mary have greater communication with Richmond. We would absolutely stress communication with Williamsburg, but why stop there, let’s think bigger.”

Canakis acknowledged his support of Benming Zhang ’16, who is running for election to the Williamsburg City Council. He promised that if elected, he would make sure the College did not operate within a bubble, but would work with the College through petitions on his website. Brown, who also supported lobbying in Richmond, emphasized furthering the relationship between the College and the College’s Washington Center. Additionally, she promised that, if elected, she would work on initiatives to show the College’s appreciation for the City of Williamsburg.

Questions from the audience focused on why candidates chose their running mates, how they would fulfill their campaign promises and how the candidates would help students living off-campus.

After mistakenly referring to opponent Ambrose as her running mate, Canakis mentioned that he thought that it was suspicious SA chose to launch their website in the middle of elections. This was not the first time he mentioned his belief that the timing of the website’s launch was suspect. Additionally, he voiced his suspicion that SA had borrowed language from his and Scalia’s published platform.

“The Student Assembly is slowly fulfilling its promises,” Canakis said. “We need to have wonderful ideas and work efficiently to get things done in a timely fashion. The fact that the website was just launched was unacceptable.”

Students will vote to elect one of these three candidates on Thursday, March 24. Polls will close at 9 p.m.