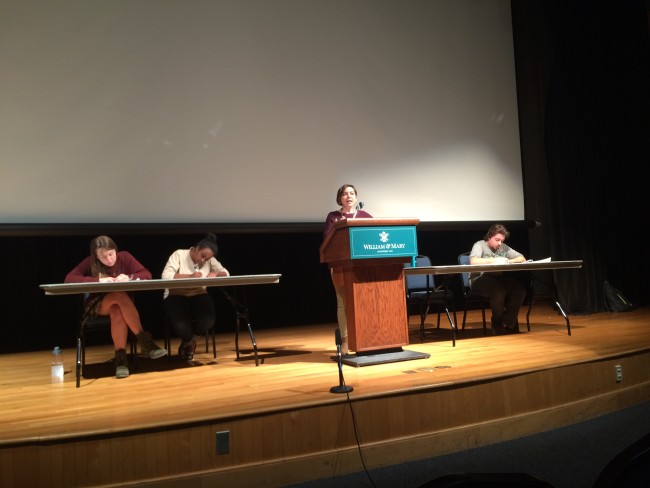 The College of William and Mary Debate Society tackled the question of reparation payment in their most recent debate.

The debate was held at the Commonwealth Auditorium Tuesday, March 22. Four members of the Debate Society debated the pros and cons of the resolution: “The United States should pay Black Americans reparations.” The debate followed a parliamentary-style debate format, with each side taking giving two constructive speeches and a closing rebuttal.

Debate Society Vice President of Education Gerry Jamison ’17 and Ciera Killen ’18 argued in favor of the resolution. Jamison made the first constructive speech. He began by presenting the historical and philosophical basis for reparations. He compared the payment of reparations to black people to reparations that the United States has already paid to Native Americans and Japanese-Americans.

“Some injustices are so great that groups do not simply bounce back when the injustice ends,” Jamison said.

Some injustices are so great that groups do not simply bounce back when the injustice ends. — Gerry Jamison ’17

He went on to describe the numerous injustices inflicted upon black people in American history. Jamison rounded out his argument by listing the economic benefits of paying reparations to black people: greater political empowerment, decreased poverty and economic stimulus.

Debate Society President Jerusalem Demsas ’17 and Vice President of Novice Mentorship and Development Amelia Koby ’18 opposed the resolution. In the second speech, Demsas called into question several of Jamison’s claims. While she acknowledged that black Americans had suffered injustice, she said that reparations would fail to have their intended effect.

“We think it will stoke a lot resentment that people actually feel, that the government is preferring one group over another, which is probably prima facie unconstitutional,” Demsas said.

She also argued that the purported economic benefits of reparations would likely backfire due to inflation and frivolous purchases.

“I think a lot of the individuals who are racist and [who would provide] backlash have distorted misconceptions of what black Americans are actually like,” Killen said.

She reasoned that if black Americans could afford better properties in what are currently predominantly white neighborhoods, white Americans would develop more accurate perceptions of black people.

We think that the government cannot be an arbiter of morality. We prosecute for murder, not because we think it is morally wrong, but instead because it is illegal. — Amelia Koby ’18

Koby made the final constructive speech, in which she argued that it is not the government’s place to right past wrongs.

“We think that the government cannot be an arbiter of morality,” Koby said. “We prosecute for murder, not because we think it is morally wrong, but instead because it is illegal.”

After the four constructive speeches, Jamison and Demsas both gave two-minute rebuttals in which they further developed and clarified their points from previous speeches.

At the end of the debate, the participants opened the floor for floor speeches. Several members of the audience took the podium and gave their personal perspectives on the debate. Brian Meyer ’16 said that state and local governments, rather than the federal government, should be responsible for paying reparations.

“I feel like it is the state government’s responsibility to largely right a lot of wrongs that were conducted, whether that’s the Jim Crow laws were passed in the South, very discriminatory, or whether it is even after the federal government intervened with stuff like the Civil Right’s Act and Voting Right’s Act,” Meyer said. “I do believe the state governments are largely responsible.”

About 30 people were in attendance, including members of the Debate Society.