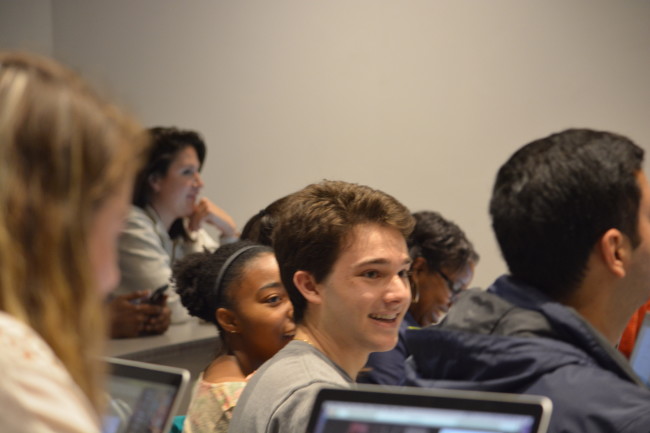 During the penultimate Student Assembly senate meeting of the semester, senators discussed legislation aimed to correct problems uncovered during the prior session.

Following SA code, outgoing Chairman of Senate Dan Ackerman ’16 sponsored the 2016 Closing of Session Act, which rolls over bills from the previous session to the current session. When the act was originally introduced, it included 12 bills. After senators edited it in committee meetings over the weekend, the bill was revised to only include the Make College Affordable Again Resolution, the SA & Chill Act and the SA-75 Resolution.

This bill was passed by a vote of unanimous consent, allowing senators to continue discussion of this legislation during the next academic year.

In September, former senator John Yoest ’17 resigned due to other time commitments. Former senator T.J. Soroka ’17 filled that vacancy but also resigned, this time at the end of the fall semester to study abroad. At the time of the senators’ resignations, the process for appointing replacements was not codified. For this reason, Chairman of the Senate Danny O’Dea ’18 introduced the Succession Act, which codifies the process of replacing a senator. Under this process, the class president would be responsible for sending out applications and conducting candidate interviews. The decision would be then be made by the class president and the class’s other senators.

This bill also codifies the process of replacing a class president. In the fall, SA senate members faced the challenge of replacing former Class of 2018 President Jose Acuna ’18. The fall 2015 ballot included the Class of 2018 presidential seat, and sophomores voted for that position at the same time Class of 2019 elections were happening.

Under the new act, senators of that class will undergo a blind vote to determine an interim class president. Following this election, they will obey established code to elect a new class president. The bill was passed by a vote of unanimous consent. 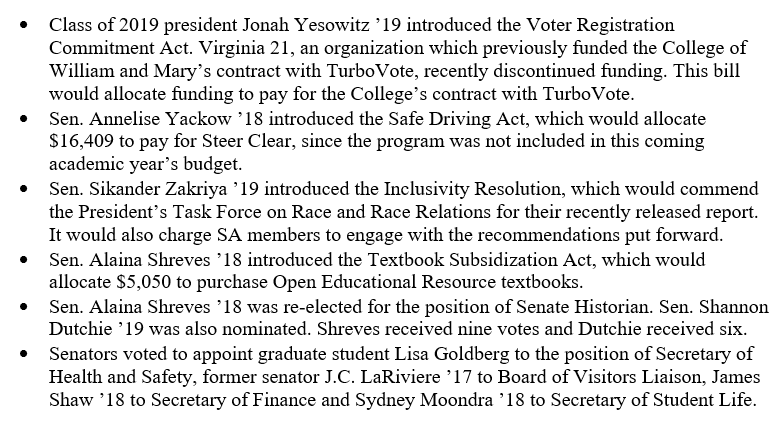 Class of 2019 President Jonah Yesowitz ’19 introduced the Class Committee Act, which would establish class committees as standing committees and require them to meet weekly. With changes made over the weekend, the bill also includes a committee for graduate representatives.

According to Yesowitz, these changes were made to make sure no one was left out.

“We added an addition to the four class committees, a fifth graduate committee, to ensure that nobody is being left out,” Yesowitz said.

We added an addition to the four class committees, a fifth graduate committee, to ensure that nobody is being left out,” Yesowitz said.

This bill was passed by a vote of roll call. All senators except Sen. Quetzabel Benavides ’16 voted in favor of this bill. Benavides abstained from voting.

“I appreciate the accountability that this bill will create among classes,” Class of 2017 President Emily Thomas ’17 said. “It will provide us with the incentive we need to uphold our meetings and attend them regularly.”

This bill addresses two issues that have been discussed over the course of this year: efficacy of SA and further inclusion of graduate representatives in the senate.

Following issues with the 2016 SA elections, O’Dea introduced the Elections Commission Act. In an earlier senate meeting, senators raised concerns over the way the Elections Commission notified candidates of election results and the time frame of the campaign process. According to O’Dea, this bill will serve as a way of codifying details of the process.

“We realized after this election season that there is not a codification process for certain things that we have just taken for granted in the election season here at William and Mary,” O’Dea said. “This is our counter to that to ensure that we have a more structured and regularized election approach.”

We realized after this election season that there is not a codification process for certain things that we have just taken for granted in the election season here at William and Mary,” O’Dea said.

Disagreement arose over the wording of a clause in the bill that would charge the Elections Commission with maintaining polling locations. Thomas said she thought the clause was outdated, since voting now occurs online through a website maintained by the commission. She proposed a friendly amendment to change the wording of the clause to reflect that.

Ackerman said he thought that the senate should pass the bill with the wording unchanged and then introduce legislation in a later meeting to clarify details on polling places. A majority of senators voted against this decision and decided to work on rewording the clause.

One suggestion for rewording the clause was to change it to reflect that voting occurs online. Yesowitz said that he hesitated to make the wording more specific in case of a future change in voting mechanisms or a website crash on the day of voting.

After discussion, senators passed the amendment by a vote of roll call. Sen. Ivanessa Staykova ’16 voted against the amendment, and Yesowitz and school of education graduate representative Kathryn Cohen abstained from voting.

After passing the amendment, senators passed the bill by a vote of roll call. All senators voted in favor of the bill.