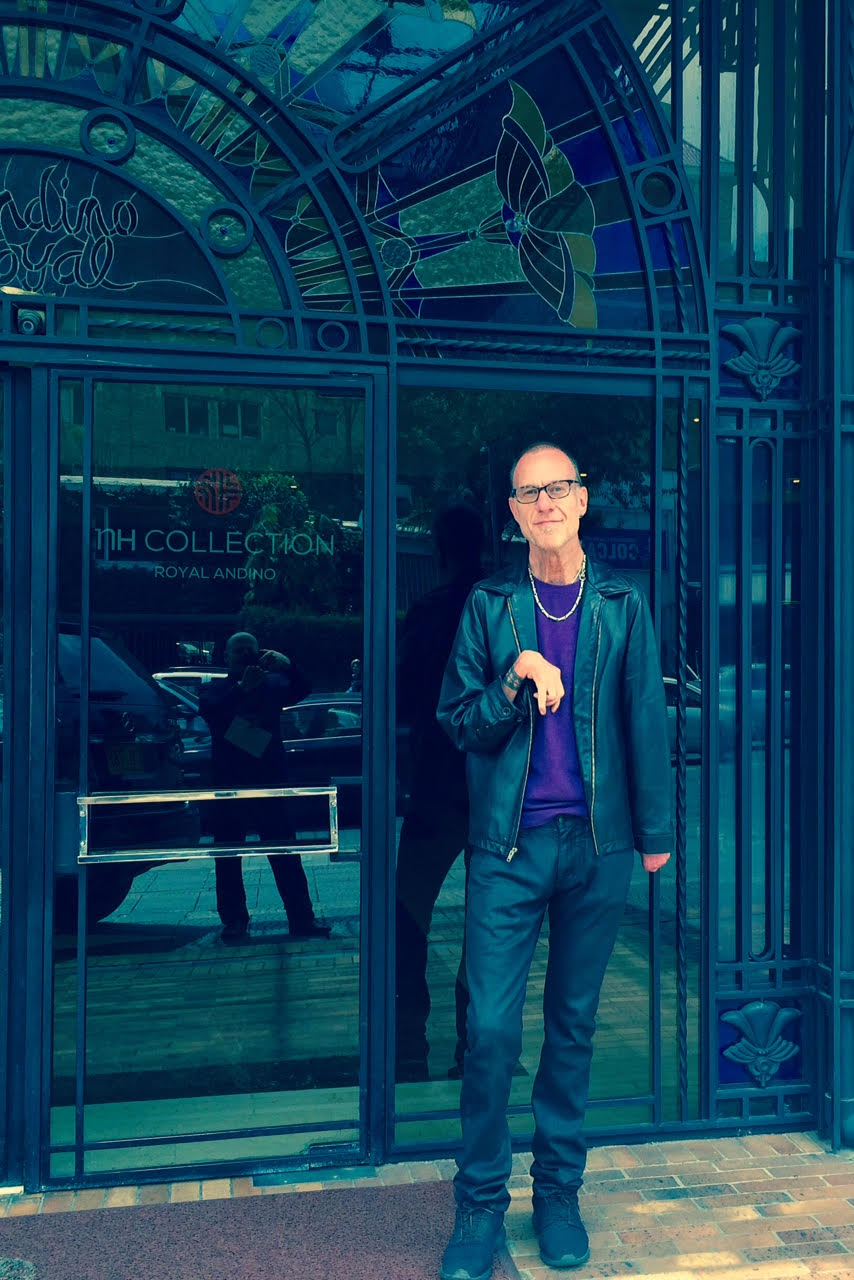 As a student at the College of William and Mary, New York Times Investigative Reporter and Pulitzer Prize Winner Serge Kovaleski ’84 may have overdone it on the philosophy classes.

“Everything I was taking was so dark,” Kovaleski said. “I remember sitting on the steps of the Sunken Garden one night breaking down. I’m like, ‘Holy f— man. My whole view of the universe has changed.’”

“Afterwards I think I went to Paul’s Deli and drank five pitchers of beer,” Kovaleski said.

Kovaleski majored in philosophy as a student. He would often stop by the Sunken Garden just to sit and think.

“… At night, it had sort of a very profound, eerie feel sometimes,” Kovaleski said. “One night, I remember because it was unusually foggy on the campus, some dude wearing a beret was walking through the Sunken Garden towards the steps where I was sitting. He was playing a flute.”

I saw the Sunken Gardens and all the stunning architecture and it kind of screamed philosophy, literature …

Kovaleski, who recently won a Polk Award for his coverage of SEAL Team Six, did not participate in campus media as an undergraduate (aside from one letter-to-the-editor to The Flat Hat after his then-girlfriend was crowded out of her dorm due to spacing issues). The only writing he did was for his academic courses. Still, Kovaleski said that his major continues to help him succeed in his field of work.

When Kovaleksi needed to tackle his intense academic workload, he’d frequent the basement of Tucker Hall, or the library at William and Mary Law School if he wanted to really shut out all distractions.

Tucker Hall and the Sunken Garden had been Kovaleski’s favorite spots on campus since his first trip to the College with his father Fred Kovaleski ’49 as a prospective student. Kovaleski was born in Cape Town, South Africa but grew up in Manhattan.

But it was just nice people. Our parties were really robust, but they were not insane.”

“I’m this kid from New York City. I’m like, this is amazing …” Kovaleski said. “I saw the Sunken Gardens and all the stunning architecture and it kind of screamed philosophy, literature … I remember just going in these buildings and it just inspired me to want to read classics or philosophy. It just had a great scholarly, academic feel to it. And it certainly had a stillness to it that I wasn’t used to either, which I liked.”

After the tour, father and son went to Chowning’s Tavern for dinner. There, Kovaleski reflected on the town’s colonial aesthetic.

“I remember thinking how weird it would be to be sitting next to students dressed as minutemen and cobblers and everything on their way to work,” Kovaleski said. “Like I was at Disney somewhere.”

As it turned out, many of Kovaleski’s fraternity brothers worked as historical interpreters. Kovaleski, who didn’t consider himself much of a “fraternity guy,” joined the school’s Gamma chapter of Pi Kappa Alpha.

“At the time it was the most diverse fraternity,” Kovaleski said. “It was also very gentlemanly. Not old, Southern gentlemen. But it was just nice people. Our parties were really robust, but they were not insane.”

Kovaleski, a soccer player since high school, became captain of Pi Kappa Alpha’s intramural soccer team. As the team’s rover, he played both defense and offense.

He also enjoyed constructing floats for the College’s Homecoming parade. One year, his brothers put him in charge of the construction.

“I was like, ‘Are you guys insane?’” Kovaleski said. “I don’t remember exactly what [the float] was, but it was a colossus. It was something totally bizarre, but it got a lot of attention.”

Aside from the fraternity, Kovaleski’s social life consisted of a core group of close friends.

“We had a lot of wild times, but we’d keep it under control and get our studies done,” Kovaleski said. “It was kind of a small group but very smart and closely knit.”

The group’s main haunt was Paul’s Deli, where Pi Kappa Alpha members tended to congregate at the time. Kovaleski eventually opened up a tab at the bar. He also spent time at the Green Leafe, where the English and philosophy majors hung out.

We had a lot of wild times, but we’d keep it under control and get our studies done

His parents also inadvertently facilitated one of Kovaleski’s craziest senior year experiences at the College. His father was head of the international division of Nabisco at the time. One day, his parents sent him a case of samples from a subsidiary company. Kovaleski opened the box to find it was filled with small airline bottles of booze.

“That night, I think almost everyone in the frat house, PIKA, where I was living, got bombed,” Kovaleski said in an email. “I mean really bombed. It was during reading period for finals, and I think the arrival of the bottles tapped into anxiety about exams because my frat brothers and women friends were really letting it rip. There was a whiff of anarchy in the air. For hours, our room was packed. There was blaring music and dancing. And in the end, there were lots of burdensome hangovers and dozens and dozens of small booze bottles scattered on the floor of our room. There were even a few friends passed out in our bunk beds, which made sleeping off a tad challenging.”    ​

Kovaleski got through finals. Upon graduation, he traveled to Paris.

“I studied some French at the Sorbonne, did a ton of reading for a year, and drank a lot of wine,” Kovaleski said.

Before he had to return to the United States, Kovaleski decided to travel around communist Europe. He couldn’t get a visa to the Soviet Union in time, but he ended up visiting Bulgaria, Poland, Romania, Hungary and Yugoslavia.

And in the end, there were lots of burdensome hangovers and dozens and dozens of small booze bottles scattered on the floor of our room

“I was all over there. I was just seeing things that were blowing my mind,” Kovaleski said. “I was like, I have to be able to convey these somehow.”

Kovaleski concluded that the most viable way of pursuing a writing career was working for a newspaper. A family friend who owned Cox Newspapers helped him get a clerical position for Miami News in 1985. Kovaleski said that Miami was a great city to start his journalistic career.

“That was the time of Miami Vice and things were just crazy in Miami at the time,” Kovaleski said.

While he worked as a clerk on the paper’s city desk, Kovaleski would listen to the police scanner. The newspaper would often send clerks out to cover crimes. Within six months, Kovaleski was promoted to the crime beat. Later on, he was assigned to the business beat.

By that time, Kovaleski was homesick for New York City. He decided to take a job at the New York Daily News. From there, he went on to work for Money magazine and the Washington Post before being hired on to the metro desk of the New York Times as an investigative reporter. Along with the rest of a team of reporters from the paper’s metro desk, he won a Pulitzer Prize in 2009 for his coverage of former New York City Mayor Eliot Spitzer’s prostitution scandal. Today, he works at the culture desk of the newspaper.

In 2014, Kovaleski returned to Williamsburg for his 30th reunion and his father’s 65th reunion. They met up with old friends, caught the Tribe football game and had dinner at the Williamsburg Inn. He said that Williamsburg hasn’t changed much since he was a student.

Kovaleski credits the College with encouraging him to pursue an intellectual life.

“I set off on an intellectual path because of William and Mary,” Kovaleski said. “I felt like it positioned me so well to do that. I felt so versed and learned and well read and able to think when I got out that I’ll always be very indebted to the school for that, it really put me on that course … That’s where I think I really grew the most. I am who I am today in a large part because I went there.”