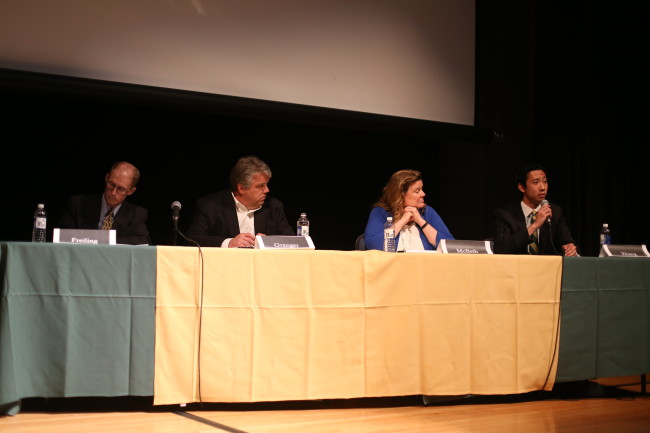 With one week until City Council elections, four of the five candidates placed their platforms side by side at a Town Hall at the College of William and Mary April 26, hosted by The Flat Hat and the Student Caucus. Candidate Barbara Ramsey ’75 was unable to attend the debate due to a prior commitment.

In their opening statements, the candidates focused on the reasons behind their decisions to run and the key elements of their platforms.

Student candidate Benming Zhang ’16 said that a major part of his platform was based on inclusivity.

Incumbent Vice Mayor Paul Freiling ’83 used his opening statement to focus on education, which is an issue he sees as critical during this election cycle. Freiling cited his previous years on City Council and serving on various committees as an advantage he had over his fellow candidates.

“Just because my current term ends on June 30, doesn’t mean that all of a sudden on July 1 there aren’t children deserving of a good education in our schools or that people aren’t in need of basic utilities,” Freiling said. “There’s a pretty steep learning curve when people are elected to City Council, and I’ve climbed that curve.”

Just because my current term ends on June 30, doesn’t mean that all of a sudden on July 1 there aren’t children deserving of a good education in our schools or that people aren’t in need of basic utilities,” Freiling said.

One key issue addressed during the debate was what each candidate would offer to students at the College if elected. During this election, many candidates have ties to the College — two are alumni, one is a current student and one is a professor.

For public policy and economics professor Elaine McBeth, the most pressing issue for students involves creating a sense of community for the students. She cited improvements to the City of Williamsburg such as creating more parking and better transportation for students. She mentioned that her time living close to campus has been filled with positive relationships between her and student groups.

Another important question in the debate was what each candidate envisioned as the future of the city. Granger proposed recruiting research ventures to restore the vibrancy he remembered from growing up in Williamsburg. Granger has focused his platform on redeveloping the business and commercial aspects of Williamsburg’s economy.

McBeth and Zhang’s responses to this question overlapped on issues relating to redevelopment and economics. Zhang said he would like to see Williamsburg be “bold” in tackling issues relating to zoning to encourage businesses to invest in this area. McBeth listed economic development, education and neighborhoods as the basis for her choice to run in this election. She recommended working more closely with higher education and public schools to improve these three areas.

Moving into more specific questions, the candidates were asked what they would like to see done in terms of regulating businesses like Uber and Airbnb, Inc. Granger focused his response on how the state and city’s interests can be at odds.

“The notion that a city can plan carefully for a long period of time … and plan their zoning ordinances and laws and just have them cast aside by the state government is disturbing to me,” Granger said. “We need to be mindful of the opportunities that are ahead of us and we have to be thinking about how commerce will change. We have to make sure we evolve with it.”

The notion that a city can plan carefully for a long period of time … and plan their zoning ordinances and laws and just have them cast aside by the state government is disturbing to me,” Granger said.

The other candidates in attendance agreed that these businesses needed to be handled at a local level, as opposed to the state level. Zhang said that he thought it was important to emphasize the City Council’s role in emphasizing their active role in developing the Williamsburg’s legislative agenda.

During the debate, there was also a chance for members of the audience to ask questions. Lillie Hughes ’17 mentioned that in her time volunteering through College Partnership of Kids at local middle and high schools she had noticed inequities and asked the candidates how each of them would handle these if elected. Hughes also asked how the creating of a fourth middle school would affect the current population of students.

Granger, who mentioned that his wife was not in attendance at the debate because she was at a meeting at Lafayette High School’s Parent Teacher Association, said the City Council needed to be “vigilant” while looking out for students.

All of the candidates agreed that the City Council should do more to support the School Board. McBeth, in addressing what effect the fourth middle school would have, said that she was not worried about the redistricting process.

“I don’t think we’ve really had a difficult time in getting students to go to the new schools because the new schools have all the new stuff,” McBeth said. “It is our role as City Council to support the school board.”

Following up with a popular platform issue — retaining graduates from the College — a question submitted via Twitter focused on how each candidate would attract jobs to the city that would be desirable to graduates.

Although each candidate agreed it was important to smooth out the Williamsburg’s demographic imbalance by retaining or attracting more young professionals, they acknowledged that it would be difficult — and possibly not in Williamsburg’s best interest — to retain all graduates.

McBeth, who said that it might not be in the College’s best interest for all graduates to remain in Williamsburg, said that providing affordable housing and jobs would be one way to attract more young professionals to the area. Zhang, who also owns and rents out a house in Williamsburg, said that he thought the focus should be on creating a place students want to come back to. He cited the Virginia Beer Company, founded by two alumni, as a positive example of retaining graduates.

“We’re not going to have every single student who graduates from this college want to stay in Williamsburg,” Zhang said. “We need to have bold land use plans … so that those who love Williamsburg can also start a business here if they choose. I think my perspective will be unique on City Council as a student and emerging young professional — these will be the issues that I will be relating to in the coming years.”

Brian Jenkins ’16, who serves as executive director of Greater City, a local homelessness group, cited a statistic that over 800 people are homeless in the greater Williamsburg area. He asked each candidate what specific policies they would support to increase and advance low income housing opportunities in the community.

In response to this, Granger said he would like to see Williamsburg partner with organizations to help deal with homelessness. In his response, he also tied in the problem of student off-campus housing, citing a shortage of affordable options. To fix this, he said he would like to give students the opportunity to live where they want to live.

Freiling cited the way the city handled the Super 8 motel — purchasing it and then holding it as city property until a beneficial use was found — as a positive example of City Council involvement in homelessness. He said that he thought homelessness could not be addressed with one ultimate solution because it needs to be handled one family and one individual at a time.

Student Assembly President Eboni Brown ’17 asked one of the final questions at the debate. Part of her SA platform focused on lobbying for funding to bring a Sexual Assault Nurse Examiner to Williamsburg, and she asked each of the candidates if they would support allocating funding for a SANE nurse.

Zhang said that he definitely would support it and he thought it was something City Council needed to invest in. McBeth said that although the costs of bringing a SANE nurse to Williamsburg should be something the College shared in, she would also support funding for one if she were elected. Freiling, who said he was not sure how to handle sexual assault unilaterally, recommended looking to the local health community for advice moving forward.

Granger, who has a daughter in college, says that sexual assault is an important issue to him because he worries about his daughter’s safety.

“I currently have a daughter who’s a junior in college and I worry about these things,” Granger said. “I worry about my children and everyone else’s children … let’s make sure there are multiple nurses trained to take care of these issues. We can’t just focus on the issues that are at hand, we need to accept those and go beyond that because we are talking about peoples’ safety.”

Other questions at the debate revolving around the three-person rule housing policy, redeveloping the city’s Arts District and balancing conflicts of interest in making policy decisions.

Each candidate’s closing remarks were used to reemphasize their platforms.