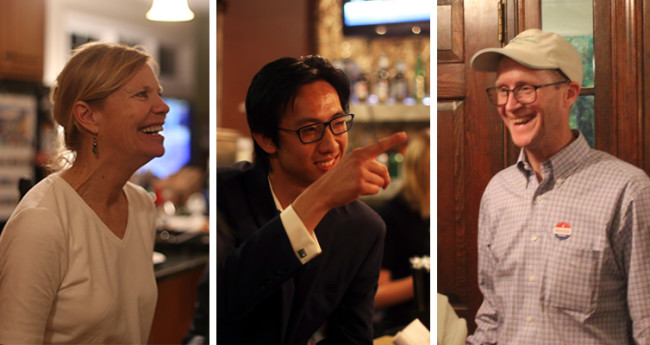 Senior Benming Zhang was elected to the City of Williamsburg’s City Council May 3, finishing in the top three spots in both voting precincts. Vice Mayor Paul Freiling ’83  and longtime resident and local landlord Barbara Ramsey ’75 were also elected, with Freiling receiving almost a quarter of the vote in the five candidate field.

Freiling and Zhang made the top three spots in both the Stryker and Matoaka voting precincts. In the more residential Stryker precinct, however, Granger finished ahead of Ramsey with just over 20 percent of the vote, according to initial voting data.

After the count was in, Freiling said that he thought it was important to thank outgoing Mayor Clyde Haulman and outgoing City Council member Judy Knudson.

First of all, I just want to say thanks to Clyde Haulman and Judy Knudson for their dedication and commitment to the city,” Freiling said.

“First of all, I just want to say thanks to Clyde Haulman and Judy Knudson for their dedication and commitment to the city,” Freiling said. “Secondly, as I understand it, the other two people who were elected were Barbara Ramsey and Benming Zhang, so congratulations to them for their hard work and to Greg and Elaine for all the efforts they put forth. I commend the people who put themselves out there with the willingness to serve the City. Finally I would just like to thank all the residents who afforded me the opportunity to serve the City for one more term.”

Zhang, the second student from the College of William and Mary to be elected to City Council, celebrated his election on the night before he will defend his honors thesis. According to Zhang, his ability to balance relations between students and residents was the biggest factor in his success.

“As they always say – door knocking [helps] and just getting the message out,” Zhang said. “That was the most important for us. Once our message resonated, especially with the students, we were able to kind of activate their base, but also, the door knocking, because I played the balance with residents and students, helped. I hope voters realized that. I don’t think a student candidate could have received endorsements from the Realtor’s Association or the Virginia Gazette without understanding the resident side.”

Zhang cited his success in the Stryker precinct as proof that he balanced his work with students and residents. Additionally, through the work of his campaign team, Zhang said that he and his campaign registered a total of 1,021 previously unregistered students to vote in this City Council election.

Following the start of his term July 1, Zhang said he is interested in seeing who will be named mayor during an organizational meeting. Additionally, Zhang said that the first policy change he would like to work on is researching tourism zones to see how they could be implemented in the City. He also said that he would like to see how other universities worked with local government to balance town-gown relationships.

He said he is looking forward to working with Freiling and Ramsey.

Ramsey said that her election was made possible by her broad base of support, citing the numbers of students and residents who supported her. Ramsey received 19.92 percent of the vote with a total of 1,083 votes.

I am especially thrilled to have won a seat on City Council,” Ramsey said.

“I am especially thrilled to have won a seat on City Council,” Ramsey said. “It represents my broad base of support. I couldn’t have done it without the support of students and residents. I’m looking forward to getting started on City Council.”

Freiling, Ramsey and Zhang will begin their terms July 1. At that time, the five members of City Council will decide which of them will be the new mayor for the City of Williamsburg.