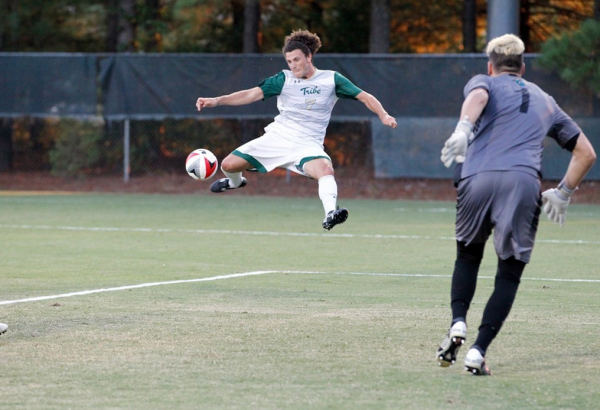 William and Mary rebounded from a season-opening loss to George Washington last Monday as it defeated No. 21 Coastal Carolina in a 2-1 thriller at Martin Family Stadium.

The College attacked the Coastal Carolina defense from the start, starting aggressive runs down the sidelines while looking to shoot early and often. This method seemed effective, as the Tribe struck first in the eighth minute. Sophomore midfielder Marcel Berry gathered the ball and worked quickly down the left sideline, slotting the ball to classmate forward Ryder Bell. Bell made one quick touch to evade a defender and fired a shot into the bottom right corner of the net to give the Tribe a 1-0 advantage.

After taking the lead, the College did not let up in intensity, taking four more shots in the next five minutes. After a shot from Berry sailed just right of the goal, Coastal Carolina reasserted itself in the match, controlling possession and the flow of the game for the remainder of the first half.

In a span of three minutes, redshirt junior Phil Breno made three critical saves to keep Coastal off the scoreboard and preserve the Tribe lead heading into the half. The most impressive came in the 31st minute when Breno dove to punch away a strong shot from a free kick.

At the half, the Tribe led 1-0. Each team started the second half with a defensive focus, not wanting to allow any strong chances for the opposition. As the half continued, the Chanticleers became much more aggressive offensively, allowing the Tribe several strong chances.

Freshman forward Reeves Trott took advantage of the opportunity, scoring his first collegiate goal in the 65th minute to give the Tribe a comfortable 2-0 lead it would not relinquish. Redshirt junior midfielder Riley Spain found Trott with a well-placed long ball. Trott gathered, edged around two defenders and unleashed a shot that fell in the bottom right corner.

Freshman forward Reeves Trott took advantage of the opportunity, scoring his first collegiate goal in the 65th minute to give the Tribe a comfortable 2-0 lead it would not relinquish.

Coastal Carolina continued its strong offensive push, with the breakthrough finally coming in the 75th minute when a pass was lobbed over Breno’s head and redirected into the back of the net by a sliding Robin Bjornholm-Jatta to bring Coastal to within one, 2-1.

That was the final chance for either team, however, as the Tribe locked down defensively over the final 15 minutes to ensure the 2-1 victory.

For the game, Coastal outshot the College 17-11, but each team had five shots on goal. Berry finished with three shots, while Bell and senior forward Reilly Maw each added two.

The Tribe will look to continue their success when they travel to face Liberty this Friday at 7 p.m.  The team then returns home to face Longwood next Tuesday.