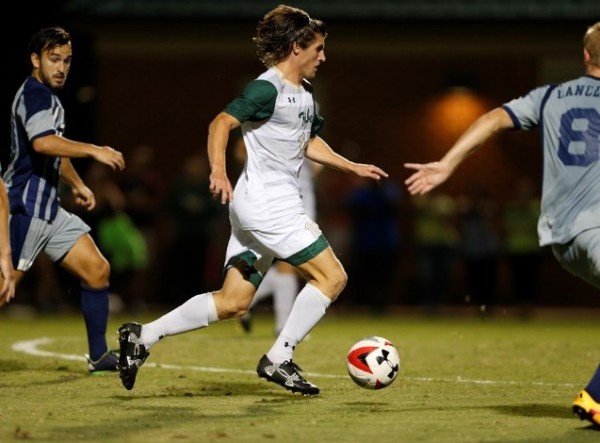 After earning back-to-back Colonial Athletic Association Rookie of the Week awards, freshman midfielder Reeves Trott was promoted to the starting lineup for Tuesday night’s game against Georgetown. Trott didn’t disappoint, laying on an assist for junior forward William Eskay to score the only goal as William and Mary defeated the Hoyas (1-5) 1-0. This win marks the Tribe’s fifth win on the bounce.

The College (5-1) started on the front foot, earning a few early corners. Eskay fired his first chance over the bar, but when Trott served him another opportunity, Eskay found the back of the net in the 22nd minute for his third goal of the season.

Eskay fired his first chance over the bar, but when Trott served him another opportunity, Eskay found the back of the net in the the 22nd minute for his third goal of the season.

The Tribe’s starting lineup featured a few new faces. Along with Trott, freshman defender Ricardo Acosta was also picked for his first start of the season. Redshirt sophomore defender Geoffrey Young, who has played in all six of the College’s games, also started for the first time. Experienced defenders sophomore Remi Frost and redshirt junior Alfonso Speed Jr., who both played in the first five games, did not appear.

Despite the personnel turnover, the Tribe defense remained watertight. Before Saturday’s 5-1 win over Campbell, the College had not allowed a goal in three matches.  Redshirt junior keeper Phil Breno pitched his third shutout of the season behind four saves. Breno was called into action down the stretch, saving two headers from Georgetown forward Zach Knudson.

Trott, meanwhile, has enjoyed a sensational rise since joining the Tribe in August. He currently leads the team in goals and assists, while converting the highest percentage of his shots. He has netted game-winning goals against No. 21 Coastal Carolina and Liberty, as well as scoring twice and assisting twice last weekend against Campbell. These excellent performances led TopDrawerSoccer.com, a prominent youth soccer website, to name him in their National Team of the Week alongside top players from nationallyranked teams.

The Tribe is in fine form leading up to its CAA opener on Saturday at Delaware, having won five games straight. The College then returns home to face No. 1 North Carolina, who dropped its first game of the season on Tuesday to unranked East Tennessee State. Saturday’s kickoff is scheduled for 7 p.m.