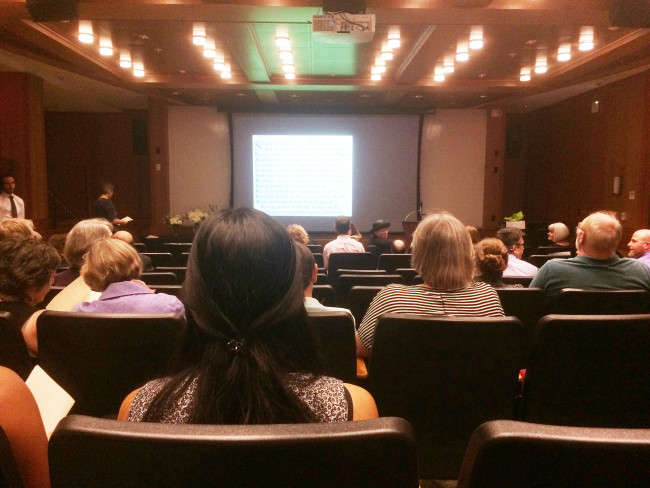 English Department Chair Suzanne Raitt opened the memorial with condolences to Blank’s family and thanks to those in attendance, focusing specifically on members of the English department faculty.

“I also want to thank all my beloved colleagues in the English department, many of whom prepared their classes through a blur of tears and stood up in front of their students, still wracked by pain,” Raitt said. “Your courage and your kindness, both to one another, and to your students, have helped all of us through this.”

I also want to thank all my beloved colleagues in the English department, many of whom prepared their classes through a blur of tears and stood up in front of their students, still wracked by pain. Your courage and your kindness, both to one another, and to your students, have helped all of us through this. — English Department Chair Suzanne Raitt

Raitt also noted the resilience of students in the time following Blank’s death, and expressed gratitude for their commitment to their daily studies in the wake of tragedy.

“You returned to campus to a community that had been torn apart by loss, and many of you were deeply affected on a personal level,” Raitt said. “Yet you came to class, you shared your ideas, and you kept going. You are what make our jobs worthwhile.”

Following Raitt’s opening remarks, various members of the English department shared praise and personal anecdotes regarding Blank’s life and character. Dean of the Faculty of Arts and Sciences Kate Connelly described Blank’s attentive nature, humor and kindness to others.

“Since her loss, I’ve heard many people express the feelings about Paula that I myself had; that they felt close to her, because she was an incredible listener,” Connelly said. “She asked questions she meant sincerely, she really wanted to know the answers to them. And her sense of humor, graciousness, permeated everything that she did, everything that she said.”

Raitt noted Blank’s many accomplishments throughout her life, including two published books, numerous articles, two fellowships at the National Humanities Center, a fellowship from the American Council of Learned Societies and a 2010 Plumeri Award for Faculty Excellence at the College. In addition to mentioning these achievements and accolades, Raitt also commented on Blank’s passion for language.

“Paula lived not just in a geographical place, but in language,” Raitt said. “And it wasn’t only that Paula lived in language, she lived for language too … Ever-widening circles of words joined her to people she loved, people she met, and even people she only imagined.”

Blank’s colleagues shared a variety of personal stories from their friendships with her, ranging from holiday memories to acts of professional kindness. English professor Deborah Morse recalled a Thanksgiving dinner she shared with Blank.

“At that Thanksgiving I had made carrot cake that was as dense as one could possibly imagine … and Paula ate an entire, I mean just an enormous piece,” Morse said. “And she said, ‘Oh this is so good — it’s really substantial!’”

English professor Erin Minear spoke about when she achieved tenure at the College, and how Blank took her out to dinner to celebrate. During the meal, Blank noted that Minear’s menu looked unusual.

“She’d had everyone in the restaurant, all the wait staff, and everyone, sign the menu and say, ‘Congratulations, Erin!’ around the corners,” Minear said.

Literature and verbal expression — in the form of poetry, songs and extracts from plays — featured heavily throughout the memorial. Morse read Shakespeare’s Sonnet 116, a poem often read at weddings. Regarding its unusual place in a memorial service, Morse explained why she felt the poem fit the occasion.

“[Blank and I] talked about this poem as of the endurance of love, of love beyond death, and it reminds me of Paula and how much we’ll miss her,” Morse said.

Other poems read included an extract from William Wordsworth’s “Ode: Intimations of Immortality,” “In Blackwater Woods” by Mary Oliver and “Requiem,” a poem written by English Professor Tom Heacox about Blank’s death.

Aidan Selmer ’17, a student of Blank’s, referenced a scene from Shakespeare’s “Romeo and Juliet” where Juliet imagines parting from Romeo upon his death.

“… Juliet remarks, ‘And when he shall die, take him and cut him out into little stars, and he shall make the face of heaven so fine that all the world will be in love with night, and pay no worship to the garish sun,’” Selmer said. “All of us gathered here, we are each, all of us those stars, and I believe that she will be seen blazing in each one of us as we live our lives.”

The memorial closed with a performance of “Malcom-Calling Blues” by English professor Hermine Pinson. Substituting Blank’s name for Malcom X’s (for whom the song was written), Pinson sang:

“I said markings in the sand, bid the spirit come on in/But for calling, Sister Paula, make your sign on the wind/A note, low and guttural, let it change on the horn.”