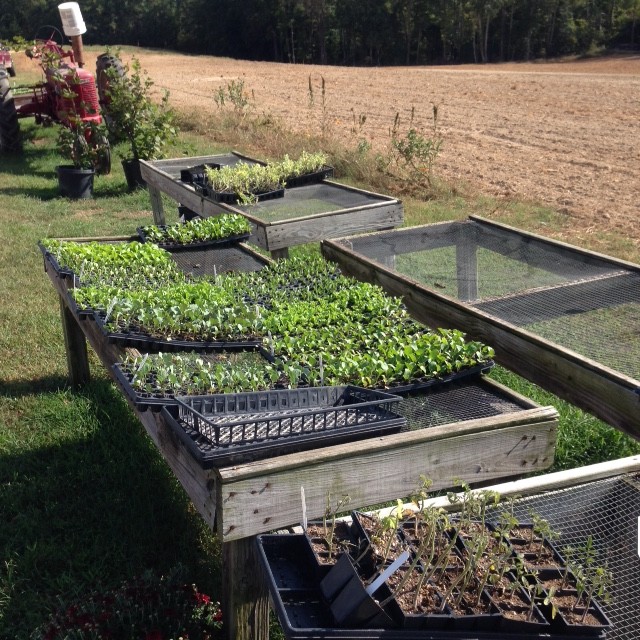 Sustainability — a frequently used word at the College of William and Mary — is becoming a part of some students’ daily lives.

The head of the College’s sustainability internship program, Talia Schmitt ’18, has recently been working with dining service employees and local farmers to bring homegrown food to the dining halls.

Schmitt said that she met two local farmers at the Williamsburg Farmers’ Market who inspired her to get more involved.

“People in William and Mary dining and I were interested in finding more sustainable solutions to have local food, and we knew Michelle and Randy from the farmers’ market,” Schmitt said.

Michelle and Randy Gulden are the owners of KelRae Farm, located in nearby Toano, Virginia.

Schmitt collaborated with Sodexo, the food supplier for the College, in early 2016 to develop a partnership that would benefit both College students and KelRae Farm. The result was a lease of six rows of farmland for crops to be grown in each season. Schmitt credits the school’s provider with much of their early success.

“It is amazing how supportive Sodexo has been … they not only bought the lease but they are paying students like Mia and I to go out regularly,” Schmitt said.

Mia Chand is one of the sustainability interns who take trips out to the farm and help the Guldens with their crops.

It is amazing how supportive Sodexo has been … they not only bought the lease but they are paying students like Mia and I to go out regularly. — Talia Schmitt ’18

The interns visit KelRae Farm three times each week, and on Saturdays they work with different volunteer organizations on campus to recruit as many interested people as possible.

Most recently, they brought along members of the Filipino American Student Association to help pick sweet potatoes.

Service chair for FASA Jolene Mafnas also happened to be a sustainability intern and said that she knew that working with KelRae Farm would be a worthwhile and educational experience for her group.

“I am interested in the whole sustainable food idea and how that relates to health,” Mafnas said. “We do events, you know, to educate people about our culture and heritage as well as service events.”

After picking and boxing yams this past Saturday, the students took a tour of the grounds, getting a close look at the animals, which include chickens, pigs, goats and a pony. A recent challenge for the program has been this summer’s record temperatures.

According to Michelle Gulden, the farm has struggled financially over the summer months.

“[We] lost probably seven or eight hundred dollars in seeds that we seeded that just lay dormant,” Gulden said.

Even with the farm’s installed drip irrigation, the various crops planted are not as healthy as they could be.

The College has signed another lease with the farm to cover both the fall and winter seasons, with the ultimate goal to have sustainably grown food inside the dining halls all year.

Food from the most recent harvest will come to the dining halls in early October.

“Our goal is to make it so that we have more fresh and healthy and local food in our dining halls but also that students and groups of students like FASA can come out to the farm, so we can bring students from William and Mary out to the farm so they can see where their food is coming from,” Schmitt said.

For Schmitt, this program is a small taste of what her future career could be like, as she wants to be an environmental educator, teaching children about the importance of sustainability.

She said that the program allows students to take a role in greater environmental efforts.

“Acting in a way that is beneficial for society and the planet and can be sustained for a long period of time,” Schmitt said.