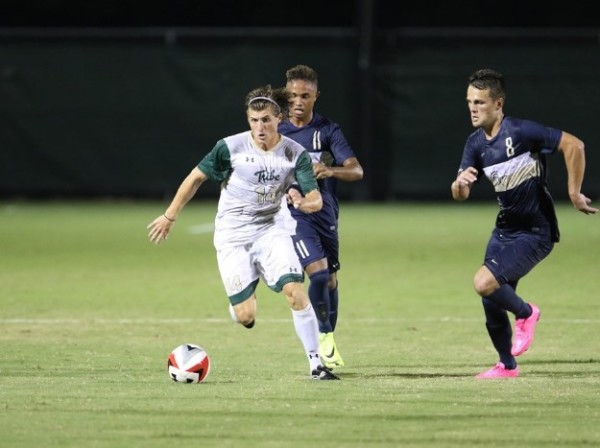 William and Mary received its first National Soccer Coaches Association of America top 25 votes this week, but showed that it remains a tier below the nation’s top teams, falling 4-1 to No. 9 North Carolina (6-1) on a rainy Tuesday night at Martin Family Stadium.

There was reason to believe that the Tribe (5-3, 0-1 CAA) could pull of the upset. Although the Tar Heels (6-1, 2-0 ACC) beat Pittsburgh on Friday, they dropped from their No. 2 ranking after their first loss of the season to East Tennessee State last week. Meanwhile, before dropping a double-overtime decision to Delaware, the Tribe had won five straight and received 11 votes in the NSCAA Division I top 25 poll. Furthermore, the College defeated No. 21 Coastal Carolina earlier this fall To make 2016  the seventh season in the last eigth where the Tribe has defeated a ranked opponent.

“We knew that North Carolina is a good team and that we’d have to have a good performance tonight,” head coach Chris Norris said to Tribe Athletics. “There were some stretches tonight where we did some really great things … I think we just lacked a bit of physical and emotional energy.”

At the start of the game, the Tribe sprung out to a hot start. Freshman defender Tanner Shane, one of three freshmen to start, hit the post after an early Tribe corner kick. Redshirt senior midfielder Jeff Bombelles took possession and made an attempt, but his shot was blocked. However, UNC made the most of its first chance. Tar Heels midfielder Jeremy Kelly found space in the box and guided a cross into the top-right corner of the goal 13 minutes in. UNC struck again a few minutes later, as redshirt junior goalkeeper Phil Breno kept out the first shot but could not save the second effort as Tar Heels forward Zach Wright punched the goal in for 2-0 during the 17th minute.

“There were some stretches tonight where we did some really great things … I think we just lacked a bit of physical and emotional energy,” head coach Chris Norris said to Tribe Athletics.

Four minutes later, the Tribe was back in the game. Junior forward William Eskay scored his fourth goal of the season, exchanging a one-two drive with Bombelles before firing from 30 yards out into the right of the goal. Unfortunately for the College, this would be its only goal of the night. The Tribe held firm until halftime, and managed six shots-on-goal to UNC’s seven.

“William’s a very good ball striker and I think he’s improved his shot-on-goal percentage, concentrating in that final moment where he goes to strike a ball,” Norris said to Tribe Athletics. “That’s obviously paying off right now, he’s scored a couple great goals from distance and really looks threatening in those situations.”

In the 56th minute,  the Tar Heels found the back of the net for the third time, effectively putting the game out of reach. After having two shots blocked by Breno in the build-up, UNC forward Tucker Hume got on the scoresheet. The scoreline was complete when UNC defender Walker Hume headed in a goal-bound shot, wrong-footing Breno and taking the score to 4-1.

“William’s a very good ball striker and I think he’s improved his shot-on-goal percentage, concentrating in that final moment where he goes to strike a ball,” Norris said to Tribe Athletics.

There were some bright spots for the Tribe. Sophomore forward Ryder Bell made his return from injury, playing 30 minutes as a substitute and shooting twice. Bell earned a spot on the 2015 Colonial Athletic Association All-Rookie team, and has two goals and two assists so far this season. Senior forward Reilly Maw had a team-high three shots, which kept the College close on the stat sheet, only being outshot by UNC 12-10.

Although the Tribe will be disappointed with the result, more important games lie ahead. The Colonial Athletic Association schedule launches into full swing this weekend, as the College visits North Carolina-Wilmington (5-1, 0-0 CAA) this Saturday, Sept. 24.

“I think another few days of rehabilitation and rest, hopefully we’ll have everybody available and ready to go,” Norris said to Tribe Athletics.

“I think another few days of rehabilitation and rest, hopefully we’ll have everybody available and ready to go,” Norris said to Tribe Athletics. “We know this’ll be another really tough game at Wilmington … they’re always one of the more difficult CAA opponents.”

After the road trip. The College returns to Williamsburg to host conference matchups against James Madison (0-6-1, 0-1 CAA) next Wednesday, Sept. 28, and Northeastern (2-4, 1-0 CAA) next Saturday, Oct. 1.