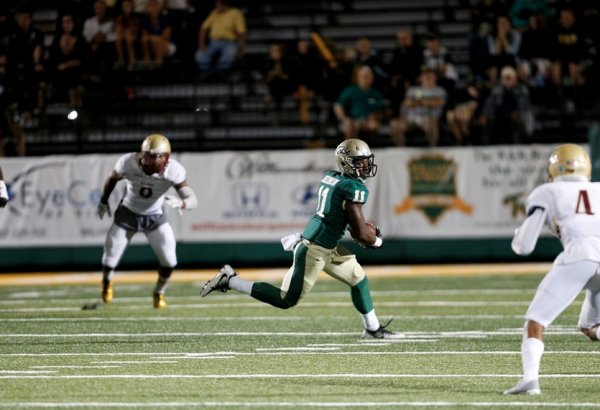 No. 8 William and Mary opened its first drive against Colonial Athletic Association opponent Elon Saturday night with a quick three-and-out. The ensuing punt was blocked by two Phoenix rushers, giving Elon possession deep in Tribe territory and ultimately resulting in a field goal. Those first few moments encapsulated a mistake-riddled game for the College, which dropped its first CAA game of the season 27-10 to snap a seven-game home winning streak dating back to last season.

The Tribe (2-2, 0-1 CAA) held advantages in several statistical categories throughout the evening, outgaining Elon (2-2, 1-0 CAA) by nearly 100 yards and winning the possession time battle, but simply could not put points on the board consistently. In particular, the offense struggled to execute in late down situations, going five for 16 on third down attempts and failing to move the chains on all four of its fourth down tries.

Senior quarterback Steve Cluley once again had problems getting into a rhythm and avoiding turnovers, completing only 23 of 41 passes while tossing three interceptions, bringing his season total to seven. After the game, head coach Jimmye Laycock ’70 voiced his frustrations with his team’s recent struggles in the passing game.

Cluley’s first interception came at the beginning of the second quarter with the Phoenix still ahead 3-0, both teams having issues sustaining a long drive. His deep ball on second down found the hands of Elon cornerback Adrian McClendon, who returned the ball all the way back to the Tribe 46-yard line. The College defense came up with a big stop after the turnover, forcing Elon to punt less than a minute later.

Pinned back at its own one-yard line by the Phoenix punt, the Tribe was forced to punt from within its own endzone after a quick three–and-out, giving Elon excellent field position in Tribe territory. The Phoenix capitalized three plays later as Elon running back Malcolm Summers dove into the endzone on a 21-yard touchdown run. Summers was the primary thorn in the College defense’s side Saturday, rushing 26 times for 120 yards and two touchdowns.

“We worked hard in practice on that same play,” Dedmon said about his touchdown. “What we do in practice, it opens up in the game … we dissect the film, we run that play, and that’s it.”

Down 10-0, the College once again could not move the chains and was forced to send out the punting unit. Senior punter Hunter Windmuller bobbled the low snap and was brought down by a group of Elon defenders back at the College six-yard line. Four plays later, the Tribe’s deficit was 17-0 after Phoenix quarterback Daniel Thompson found Elon wide receiver Cole Taylor in the endzone for another Elon touchdown. The Tribe managed to cut into the Phoenix lead with a field goal before halftime, but the damage had already been done.

The College’s biggest play of the game came near the beginning of the second half. Cluley found junior wide receiver DeVonte Dedmon on a slant route, and Dedmon sprinted past the Elon secondary and into the endzone for a 77-yard touchdown, cutting the deficit down to seven, the score 17-10.

“We worked hard in practice on that same play,” Dedmon said. “What we do in practice, it opens up in the game … we dissect the film, we run that play, and that’s it.”

Dedmon’s highlight reel play seemingly gave the Tribe momentum, but the College failed to score again. Summers and the Elon offense began to wear the Tribe defense down, putting together a 13-play, 80-yard touchdown drive in the third quarter that restored its 14-point halftime lead.

Another long Phoenix drive resulted in a field goal to open the fourth quarter, and Cluley’s second and third interceptions came after as the Tribe pressed for points, down by 17. His final pass of the game was picked off by Elon defensive back Daniel Reed-Bennett in the endzone, and the Phoenix ran out the clock to clinch the 27-10 upset over the Tribe.

The College will hit the road for a matchup next Saturday with conference opponent New Hampshire (2-2, 1-0 CAA) at its new Wildcat Stadium. Kickoff is scheduled for 3:30 p.m.