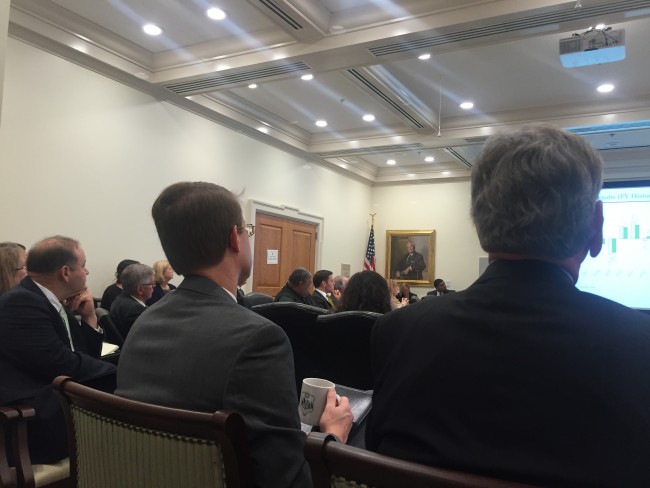 As part of a presentation during the Provost’s Report, AidData geospatial scientist Dan Runfola spoke to the Board of Visitors Sept. 22 about work the College of William and Mary is doing to develop a minor in data science.

Runfola said that although the College does have opportunities for data science research and investigation — including AidData and specific COLL 100 classes like the one he teaches called Breaking Intuition — there is not a formalized program that allows interested students to pursue data science as a field of study.

According to Runfola, some of the few data science classes offered at the College are often closed off to populations of interested students because of high-level prerequisite classes.

“We want to open this type of coursework up to different types of students,” Runfola said.

He mentioned a few of these students by name, including Emma Lather ’19, who he advises in her self-designed data science major.

Lather said that in addition to a statistics course she took in her senior year of high school, taking Breaking Intuition with Runfola her first year at the College was what made her interested in studying data science.

“It was the epitome of an interdisciplinary course and I loved it,” Lather said. “It made me really interested in the story you can find in masses of numbers.”

Lather said she is excited at the possibility of more curricular infrastructure being put into place to support additional work in data science at the College. She said she sees a demand for classes in the subject area.

Lather said that with Runfola’s guidance, she has been putting together classes in computer science and statistics that she can incorporate into her self-designed major. However, she said she has had trouble finding classes she wants to include and hopes the College will begin to offer more courses in data science because of the role she says it plays in today’s society.

“Data is becoming more important for our everyday lives and careers. With the rise of social media, big data is a much more significant part of how a lot of sectors of business operate,” Lather said. “Certain skills will make a student more desirable to employers and having classes that teach those skills is very useful.”

Data is becoming more important for our everyday lives and careers. With the rise of social media, big data is a much more significant part of how a lot of sectors of business operate. Certain skills will make a student more desirable to employers and having classes that teach those skills is very useful. — Emma Lather ’19

Like Lather, Runfola also expressed a desire to offer more classes in data science and to make the classes that are already offered available to more students.

One of the slides in Runfola’s presentation demonstrated how difficult it is for some students to take data science classes, showing that a student interested in taking the course Introduction to Simulation would need seven prerequisite classes, a requirement that would be a severe impediment to any student not already majoring in math or computer science.

To Runfola, hiring more faculty that specialize in data science is a crucial step toward opening up more classes in the subject.

Dean of the Faculty of Arts and Sciences Kate Conley said in an email that although the plan for a data science minor is still in the works and has not yet been implemented, she is supportive of the interest in developing the program.

“New faculty require resources,” Conley said in an email. “My request for a budget will start that conversation.”