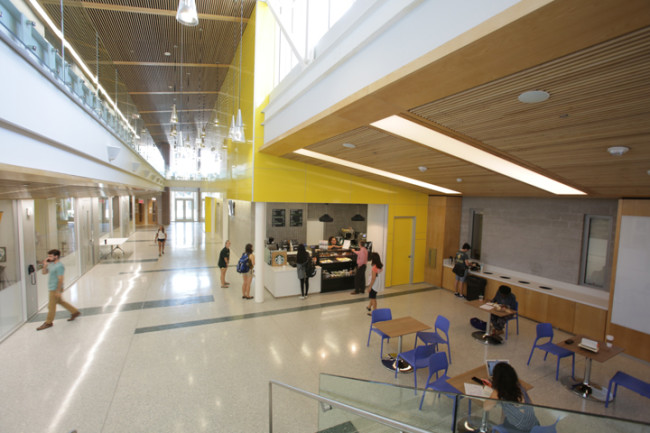 Just three hours after a tour of the new Integrated Science Center Sept. 22, the Board of Visitors sat down to hear a presentation on developments in science curricula at the College of William and Mary.

These developments were presented as part of the Provost’s Report Thursday. One such effort includes a proposed major in engineering physics and applied design.

Vice Provost for Research Dennis Manos said it is important to emphasize that a traditional engineering degree program is not what’s being proposed.

He cited schools like Virginia Tech and the University of Virginia and said that there are already places in Virginia where students can pursue engineering degrees. Instead, he said that this proposed program would be a new way of focusing and looking at existing programs in physics and applied science.

“Our intent is to leverage our strengths by blending two great complementary forces at William and Mary,” Manos said. “Namely, faculty expertise with liberal arts education and student desire to use technology to change and to improve the world.”

Rather than referring to the proposed program as a major, physics professor Wouter Deconinck called it a “curricular track.”

Additionally, the program would focus on the COLL 400 capstone requirement. Rather than having students work one-on-one with a professor doing research, students would work in teams of four to six with mentors from science and business, producing prototypes and plans for solving tasks based on real-world problems. This would incorporate the proposed engineering physics and applied design major into the COLL curriculum and solidify its status as an interdisciplinary program.

Deconinck said that he has been trying to get other people to think more about ways the College could implement engineering into its curriculum since he arrived in 2010. One of the ways he encourages engineering work at the College is by running the Small Hall Makerspace alongside physics professor Josh Erlich.

Located in William H. Small Hall room 143, the Makerspace houses tools such as a 3D printer, Oculus Rift, various drills and saws and other tools that are available for use by students and faculty. Deconinck said that, although the College has had “other activities that have been makerspace-like,” the Small Hall Makerspace was the first to focus on openness and drawing in a diverse range of students.

“I think the Small Hall Makerspace was the first place where we really tried to make it a primary objective to make it accessible to all students, all faculty, all staff,” Deconinck said. “It doesn’t really matter what project you’re working on as long as you’re using the new technologies to create something.”

I think the Small Hall Makerspace was the first place where we really tried to make it a primary objective to make it accessible to all students, all faculty, all staff. It doesn’t really matter what project you’re working on as long as you’re using the new technologies to create something. — Physics professor Wouter Deconinck

The Small Hall Makerspace has inspired the creation of other spaces around campus that operate with similar ideals. These spaces include Morton 140, a space catered to humanities students looking to do research on sensing and infrastructure, the GIS lab in Swem Library, spaces in Andrews Hall for studio art students, and more.

Physics professor Bill Cooke spoke at the Provost’s Report BOV meeting and called attention to the increased number of and focus on makerspaces at the College.

He said that physics majors have doubled in the last five years and, although a degree in physics is excellent preparation for graduate school, the proposed engineering physics and applied design track would better prepare students to enter the private sector.

“They want to be able to apply a physics degree to something useful,” Cooke said to laughter from the Board.

Cooke said the proposed program would continue to give students a deep background in science, but broaden the existing program.

Dean of the Faculty of Arts and Sciences Kate Conley said in an email that existing STEM programs at the College are important to current and prospective students and the introduction of this proposed engineering physics and applied design program would only add to the College’s academic appeal.

“STEM programs are already strong at W&M and play an important part in our role as a leading liberal arts university along with our arts & humanities and social science programs,” Conley said in an email.

Deconinck said he sees potential in the College’s new efforts toward more interdisciplinary majors, minors and curricular tracks that would not necessarily be bound to disciplines in the sciences.

“I think once this engineering physics and applied design major has started,” Deconinck said, “I think you’ll see similar initiatives in other departments.”