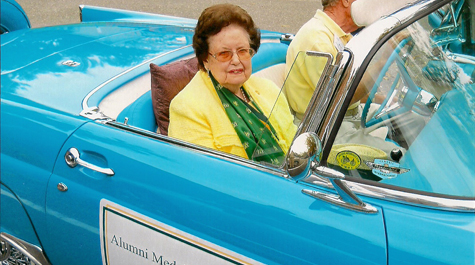 During the days of World War II, Ruth Tillar ’45 went out dancing almost every weekend. Some nights she wore three different dresses. When she wasn’t dancing, however, she was editing The Flat Hat and helping the College of William and Mary support the nation’s war effort.

At the College, Tillar studied home economics, particularly clothing and textiles, but admitted that she was more interested in the social aspects of college life.

“I was especially interested in the social life and I went to a lot of dances,” Tillar said. “That was 1941 and we had a dance in Blow Gym every Friday night.”

Since riding in her first homecoming parade with Kappa Alpha Theta Sorority in 1941, Tillar has returned every year since, for a total of 76 consecutive homecoming weekends. In 2012, she rode in the parade again to receive the Alumni Medallion.

Tillar said that her experiences from her first few days on campus as a freshman solidified her love for the College.

“Somehow I got very busy from the first week I was there,” Tillar said. “I loved orientation week and learning all about the campus, and from then on I was as happy as can be and still am. It was just great to make new friends … every memory I have of William and Mary is a happy one.”

Tillar’s first year was not spent in a typical freshman dormitory.

The College ran out of student housing for women, so they placed her and other students in faculty and administrative housing.

That meant that for a year, Tillar lived with the family of Wilfred Lambert ’27, who was the College’s Dean of Admissions at the time.

For Tillar, college was different than it is for the students today.

Besides juggling her work as managing editor and then editor-in-chief of The Flat Hat, as a sister of Kappa Alpha Theta and as a member of the German and French clubs, Tillar lived as a young adult during the war.

According to Tillar, she only had a few months of being a “normal co-ed” because of the war.

“All the boys were leaving after Pearl Harbor,” Tillar said. “So we would go to the train station to wave goodbye to the boys when they left and then we organized the WAMs, the War Activity Members, and we started doing any war-time work that we could do. We used to go in the Methodist church tower to spot aircraft and we had booths on campus that sold war bonds and stamps for war bonds. We would say, ‘Please buy our war bond and stamps and lick the other side.’”

Tillar said the WAMs also ran a childcare agency for military personnel, worked with the United Service Organizations and the Red Cross, and hosted dances for the war effort.

At these dances, men who were stationed near Williamsburg would come for entertainment.

One of these men in the armed services, who Tillar would later marry, played a major role in ending the war in the Pacific Ocean.

She said it all started when her friend’s cousin came home on leave and Tillar was asked to “break a date” and spend time with him.

“He wanted to take my friend out to dinner but she had a date that night,” Tillar said. “I had a date too, but I broke my date and went out with him on a Friday night, so he asked me to go out Saturday night and then Sunday afternoon. So from then on when he wasn’t off fighting the war, we were dating. We became engaged my senior year and married a year later in 1946.”

Tillar added that when her husband was in the service, he was a fighter pilot whose plane was shot down. He was rescued by Filipinos, who told him where Japanese soldiers could be found.

Later, the United States military rescued him with an amphibious plane and the things he learned about the Japanese were passed on to admirals, President Franklin D. Roosevelt and General Douglas MacArthur. Tillar also said that The History Channel filmed a documentary on his experiences in World War II.

The war also shaped Tillar’s work at The Flat Hat. Leading up to World War II, there had been almost no female editors.

However, Tillar said that in her first year as a staff writer she picked up all the skills she needed to edit the paper.

“We had a nice room in Jefferson Hall that had our tables set up for us,” Tillar said. “I write something for the Alumni Magazine or for my local newspaper, I still use the same format. Working as editor-in-chief during those years was really great.”

Although Tillar admitted that she stayed busy, she said that she loved spending her free time going to football and basketball games, even the off-campus ones — which she had to get special permission from her parents to go to.

When Tillar graduated, she moved to Blacksburg, Va. and worked as a teacher in the local high schools.

She now lives in Emporia, Va. and still writes for her local paper, covering the hospital’s auxiliary services, the Daughters of the American Revolution and local book clubs.

Tillar’s husband isn’t the only one who has been documented on film. The College has made two DVDs about Tillar’s experiences at the College, particularly what it was like attending school during the war.

She also scrapbooked her years at the College, which Special Collections at the Earl Gregg Swem Library is now interested in featuring in an exhibit.

Tillar’s experiences were also the basis for a class taught in the religious studies department.

One year, a student in a class on World War II invited her to come to the class, so for five years she attended the class and its programs.

Once, students spent a weekend at her house to do research on her life and past experiences.

“It was a really nice experience having them stay at my home and I still keep up with them,” Tillar said. “It was really a great thing to see years after I graduated.”

Beyond coming back for Homecoming, Tillar has also served on the Olde Guarde Board through the Alumni Association since her 50th class reunion and after a few years served as the chair.

Looking back on the last 76 years, Tillar said that it has been hard for her to notice change because she has never been far removed from life at the College.

“I don’t see much of a change because through the years I’ve always stayed with the alumni,” Tillar said. “We had different rules, but they didn’t bother us one bit. We had to be in by a certain time at night, but we never even thought about it. It was just part of the college life to us, so I know that’s changed a lot. I think there are times that things just need to be changed and that’s definitely happened here.”