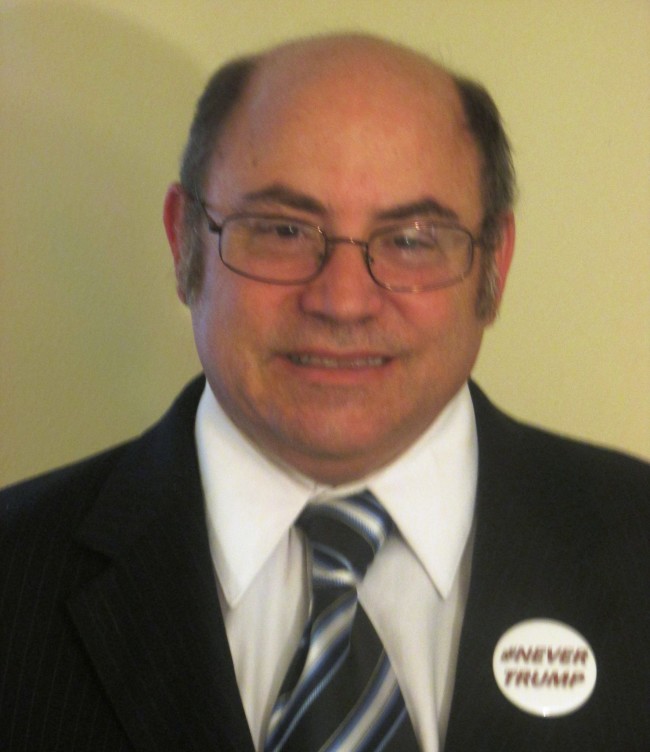 John Bloom, wearing #NeverTrump, All Lives Matter and #Castle2016 lapel buttons on his suit coat, said that his inspiration for starting his career in politics was a desire to fight the corruption he saw in his party. Now, Bloom is running for a position in the Virginia Senate as an independent candidate this corruption he sees in the Republican Party.

After spending years working in New York, Bloom moved to Virginia, where he became involved in fighting the corruption he saw in the Newport News branch of the Republican Party.

When Bloom wasn’t working for the conservative party in New York, he was an officer in the United States Navy, working at naval nuclear programs at different facilities and then working at a shipyard in Newport News. He said that, last September, the shipyard let him go to hire more entry-level employees.

Until May 4 of this year, Bloom also served as the Vice Chairman of the Newport News Republican City Committee. He said he left because some members of the party strongly supported Republican presidential nominee Donald Trump.

“Before you were born, the national debt was much lower,” Bloom said. “It went up after George Bush and it went up even more under Obama. I’ll be dead and gone, and you, your grandchildren and your great-grandchildren will be paying for the debt that my generation gave you [college students]. Thomas Jefferson once said, ‘One generation should not accrue more debt than that generation can pay for, to do is taxation without representation.’ I left the Republican Party because they have no more of a moral compass. The Constitution Party is what I stand with, not just the second amendment, especially the Bill of Rights.”

Bloom said that much of his platform comes from not supporting Trump or Clinton, who he blames for issues he identified in the Navy. He said that a large part of why he is running is to support Darren Castle, the Constitution Party’s presidential candidate who is an official write-in or on the ballot in some states.

“When you have a candidate whose entire career is wrapped up in Democrats, partial-birth abortion — that’s everything that I opposed,” Bloom said. “They [Trump supporters] are what I call the dark-side of the Republican Party. They are a very small minority, but now they have Darth Trump, who has emboldened all of them, and they have taken over the party.”

Bloom said his dedication to opposing Trump led him to withdraw his membership from the National Rifle Association after they endorsed Trump, even though he said he identifies as a strong supporter of the Second Amendment.

If elected, Bloom said that he wants to prioritize equal ballot access for independent or third parties, particularly in state elections. To do this, he said he wants to pass reform measures that would change the way that third parties get candidates on the ballot.

“A lot of people are so scared that if Hillary gets in we are going to lose our rights, that the Supreme Court is going to be so liberal, but the Republicans can keep control of Congress, the liberal justices will never get confirmed and her agenda won’t get passed,” Bloom said. “So it is critical that students get out to vote even if they are fed up with their choices for president, even the ones that aren’t on the ballot. They need to send a strong message that they can’t take you for granted. I don’t know how young people are so sheltered. I believe in using tax credits as much as possible. Other people shouldn’t be paying for your free education, but you could get tax credits while you pay your tuition over the years.”