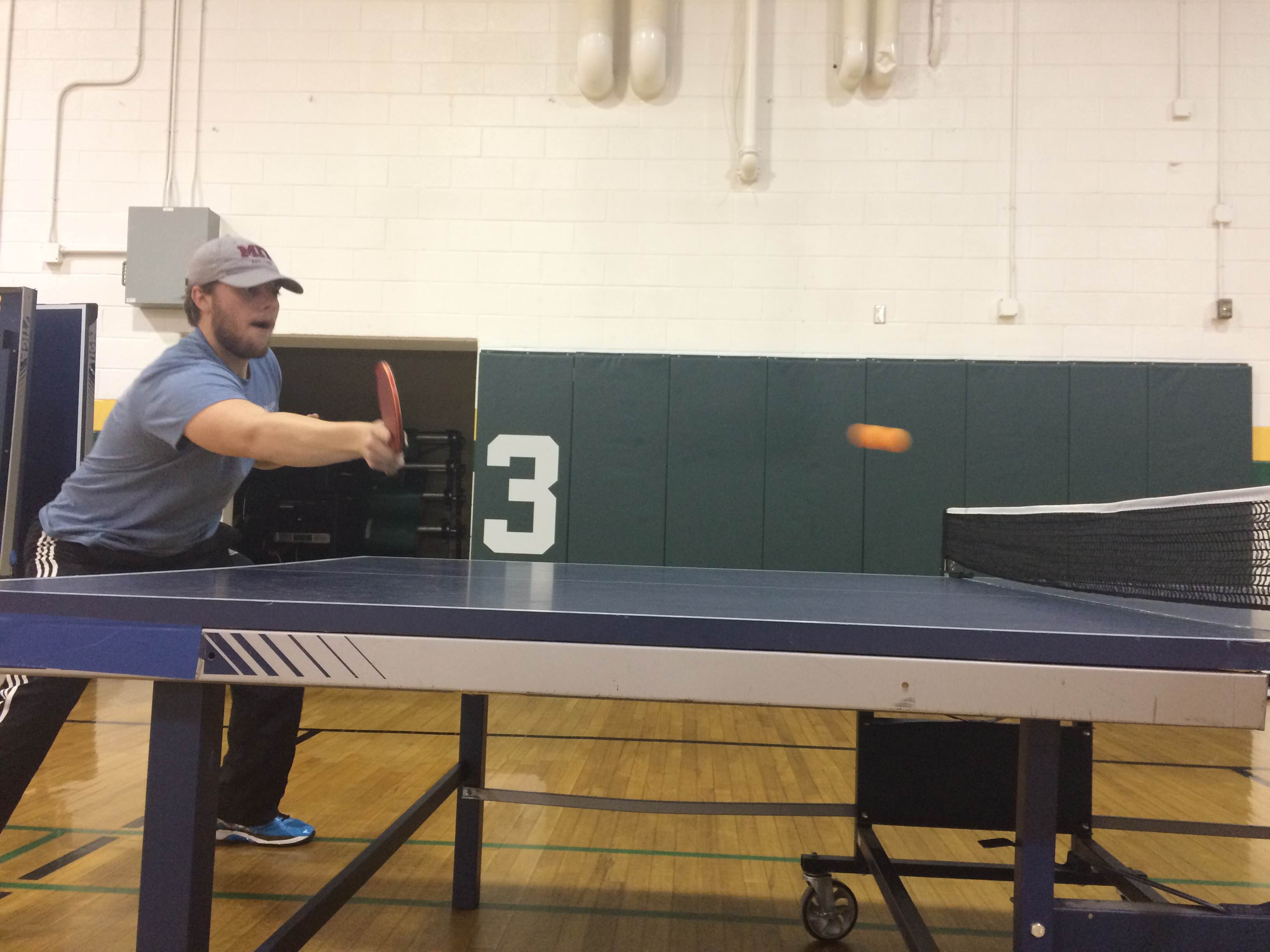 Walk into the Recreation Center, past the elliptical machines and treadmills, past the weight machines, and pull open the heavy metal doors that lead to the basketball courts. Most days, you will find a scattering of students playing a basketball game or just shooting hoops, but walk through those doors on Wednesday night or at noon Saturday and Sunday, and there will be no basketballs in sight. Instead, roughly a dozen pingpong balls will be bouncing around solid, green tables filling up the room.

The College of William and Mary table tennis club, composed of about twenty students, provides an organized outlet for those interested in playing table tennis, both for fun and competition. The team competes as a part of the National Collegiate Table Tennis Association.

The club’s president Jay Quimby ’18 said he has watched the table tennis team transform during his time at the College.

Quimby, who joined the team his freshman year, was first introduced to table tennis during middle school when he lived in China.

“We traveled around China and played other schools in tournaments,” Quimby, who was a member of his high school table tennis team, said. “And coaching is really cheap there.”

Shouzhuo Sun ‘19 joined the team this year, but like Quimby, he had already been introduced to the sport at a much younger age.

“I learned pingpong from grade six to grade nine,” said Sun. “It is a popular sport in China.”

The club produces A, B, and C teams based on the results of round robin competitions. The A team is capable of qualifying for national tournaments, and the B and C teams compete at divisional competitions to gain match experience.

“[Playing in a tournament] is always that goal, but it depends how much I practice,” Zachary Baldwin ’19, another member of the club, said. “I haven’t had any pingpong experience so it’s kind of a slow rise.”

Baldwin said he found out about the club at the College’s club fair this year.

“I was a tennis player and my shoulder started hurting, so I tried pingpong because that was like the next best thing,” Baldwin said. “It kind of stuck.”

Their next competition is the Virginia division at the University of Virginia. If the team qualifies in that state division, they can then compete in the regional championships.

“The regional tournament is really competitive,” Quimby said. “Maryland has a player that is Chinese and could be a professional player.”

The table tennis team has qualified for Regionals the past two years and almost continued on to Nationals last year, but they were thwarted by a tiebreaker loss to University of North Carolina at Charlotte.

“We have a new student on the team from China this year who is really good,” Quimby said of Shishuo Liu ‘20. “I think we can make it with his help.”

While the team is focused on winning competitions and advancing to Nationals, the table tennis club itself appeals to students for many different reasons. Sun said he joined for a very simple reason: to get himself moving.

No matter the reason, Quimby and the club said that their members have an opportunity to play table tennis to whatever extent they want, whether they want to practice certain paddle skills to tighten up before a tournament or they just enjoy hitting a ball back and forth.