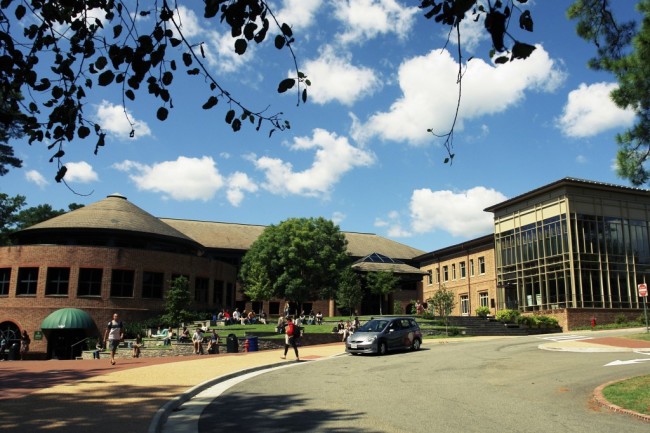 For Sadler Food Service Manager Jennifer Nicholas, constantly working around college students is not a drag; on the contrary, it’s “refreshing” and “uplifting.”

Nicholas has been employed by Sodexo for three years. She works at the Sadler Center, but previously worked as the Commons Dining Hall Food Service Manager.

Originially from Yorktown, Va., Nicholas attended Virginia Tech, where she majored in nutrition and exercise and minored in dietetics. She graduated in 1998.

Before entering the food service industry, Nicholas worked in healthcare.

“It was such an emotional rollercoaster in a very sad way when you lost patients … I got so burnt out from it,” Nicholas said. “That really made me look elsewhere.”

While working as the patient service manager at Riverside Doctors’ Hospital through Sodexo, she learned that the company was opening an account at the College of William and Mary.

Nicholas took advantage of the opportunity and made  a career change, which she said has paid off.

“It’s so exciting to be in higher ed at a college campus and learning this aspect of my career now,” Nicholas said. “It’s neat to change it up a bit and see where I can go with that.”

In her free time, Nicholas doesn’t leave the food industry behind. She said she enjoys working in her garden, cooking and trying out new recipes.

She has never been outside the United States, but a trip to Italy is on her bucket list.

Nicholas describes herself as a kind person who cares about how everybody is feeling.

Nicholas’ caring spirit is not limited to her personal life.

“Here at Sadler, I’m passionate about my staff … All the staff is amazing,” Nicholas said. “One thing you would notice if you even spent a day here is how well they work together. They’re a team. At the end of the day, you feel like it’s one big family.”

As a manager, Nicholas’ job can be demanding.

“We work such long hours,” Nicholas said. “We’re here more than we are at home.”

The hardest part of her job is not the 10 to 12 hour shifts, or the fact that Sadler serves 1,600 students for lunch alone, however.

“I invest so much time in my staff and that’s with training, helping them set professional goals for themselves and helping them achieve those goals,” Nicholas said. “The hardest part for me is seeing them leave and move on … On the same note it’s rewarding because you’ve helped them achieve one of their goals.”

Another difficult part of the job has been some of the rude comments made by students related to the dining hall that she has encountered on social media.

Nicholas’ marketing manager Melissa Strain said it could be difficult.

“There has been some negativity I have seen before on social media, which I think is a big disconnect because it’s very easy to say things like that,” Strain said. “But we all do take things very much to heart … we always are trying to make everyone happy, which isn’t always possible … we’re always trying to strike that balance.”

Incidentally, the misuse of social media is something that Nicholas said really bothers her.

“I think the younger generation doesn’t realize the effects it can have on their life when they post certain pictures … not knowing how it can affect their professional career, their families,” Nicholas said.

Nicholas also spoke to the dangers and safety concerns related to social media that plague the younger generation.

“The way I took action was I ended my Facebook account because I didn’t want to be a part of it, I didn’t want to see it,” Nicholas said. “Also my daughter is going to be 13 in a few weeks. At this point I don’t allow her to have a Facebook account or Instagram. You just wish you could tell some of these young people and get that across, that you don’t understand what you’re doing.”

Nonetheless, Nicholas said she really enjoys working around students of the College, whom she describes as “high achievers.”

“Here what was so refreshing was … being around all these young students, they’re all so uplifting and the atmosphere is so energetic,” Nicholas said.

In fact, Nicholas’ switch from the Commons to Sadler has been all positive, except for one thing.

“One thing Sadler is so missing are more students working here,” Nicholas said. “When I was at Commons … we had like four student-workers … and it was so exciting. They were so much fun to work with, they were always so motivated, they were always eager to learn. That’s what I’m missing at Sadler here is I have zero students, it would be really cool to have them here helping.”

Nicholas said that she understands the College is a family, which is why, although she and the other dining staff work for Sodexo, they are also College-contracted employees.

“My relationship starts with helping a student with something in the dining hall,” Nicholas said. “That’s my job. I’m such a sociable person that I always look at every opportunity to get to you guys.”