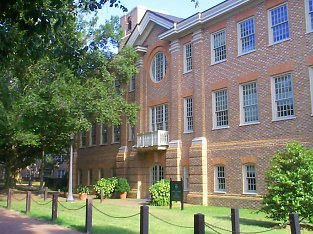 According to the founders of a new computer science organization at the College of William and Mary, people assume their field is dominated by men.

By rolling out the College’s first chapter of the Association for Computing Machinery for Women, Wendy Guo ’18 and Anna Pelleti ’17 hope to combat this stereotype.

“ACMW supports, celebrates and advocates internationally for the full engagement of women in all aspects of the computing field, providing a wide range of programs and services to ACM members and working in the larger community to advance the contributions of technical women,” Guo read from the organization’s mission statement.

According to Pelleti, the organization is important because it provides scholarships and networking events specifically for women.

“It’s a national organization … ACMW is for women specifically,” Pelleti said. “They have different scholarships and different meet ups. They provide resources to chapters to further encourage younger students like middle school students and high school students, as well as computer science students in college.”

According to Guo and Pelleti, the Association for Computing Machinery has existed at the College for years, but wasn’t very active until just recently. That’s when Guo, club’s vice chair, and Pelleti, club’s chair, got the idea to start a chapter specifically for women, resulting in the birth of the College’s chapter of ACMW.

Because it takes several months to process the applications and forms necessary to start a new student group, ACMW is not officially a club at the College yet. Guo and Pelleti said that by next year, ACMW will be a fully functioning and officially recognized organization at the College.

Another component of ACMW will be working with girls in schools in the Greater Williamsburg area to expose them to computer science.

“The biggest issue right now is in a lot of elementary and middle schools, and even in a lot of high schools, computer science isn’t even offered as a course,” Guo said. “People in general aren’t even aware of computer science as a potential career path. For younger girls, it’s really important for them to have female role models who they can see in this field.”

“It’s such an applicable field,” Pelleti said. “Everything is code nowadays.”

Guo, a computer science and finance double major, said that she appreciates the opportunity to merge many of her interests through computer science. She also spoke about the sense of accomplishment she feels when solving problems.

“With coding you’re actually building something that you can see work at the end,” Guo said. “Sometimes it can be really challenging, but the feeling you get at the end when it works at the end and you see what you created … it’s a really satisfying feeling.”

Guo said that, in elementary schools, there is a fairly equal ratio of males to females who are interested in STEM subjects.

However, as girls get older, the number of them interested in STEM tends to drop off. Pelleti added that beginning in the 1980s, when personal computers were first rolled out, the devices were highly marketed toward males, forming the basis of the stereotype that computers were “a guys’ thing.”

“There is such a hidden history to women in tech,” Guo said. “There are many women who are in the technical field who have done so much for us, but nobody knows of their existence because at the forefront of these historical events, you always see a white male.”

According to Pelleti, one of the most significant challenges she’s faced is finding other women represented in the field of computer science.

“Primarily, the biggest challenge that I’ve … encountered is generally when you see a woman in computer science, you’re already fighting against the stereotypes and the societal climate,” Pelleti said. “The majority of people in our classes are guys and so feeling like you need to prove yourself … Women are just as capable if not more [capable] to actually code and to actually succeed in [computer science] … it might be encouragement that’s lacking that prevents a woman from being able to achieve things that a man can.”

Computer science professor Evgenia Smirni said that she was ready to help when Guo and Pelleti approached her about becoming ACMW’s faculty sponsor. She also spoke about the challenges of being a female professional in computer science.

“The reality is that the field is male-dominated,” Smirni said. “You have to show that you are better than a man. That’s the way it is. For William and Mary, I have to say that I am very proud to see that our numbers are above the national averages both in the number of undergraduate students for women, also graduate students, and also faculty. We are essentially a department that has pretty high representation of women.”

For Pelleti and Guo, a supportive environment enabled them to pursue computer science despite the presumption that the field belongs to men.

“I’ve always loved mathematics, and that’s something that my parents, and my dad particularly, encouraged me on from an earlier age,” Pelleti said.

So far, the club has around 20 committed members, and Guo and Pelleti plan to form an executive board next year. Members do not need to be computer science majors.