Home Latest News To vote or not to vote: That is the question for some 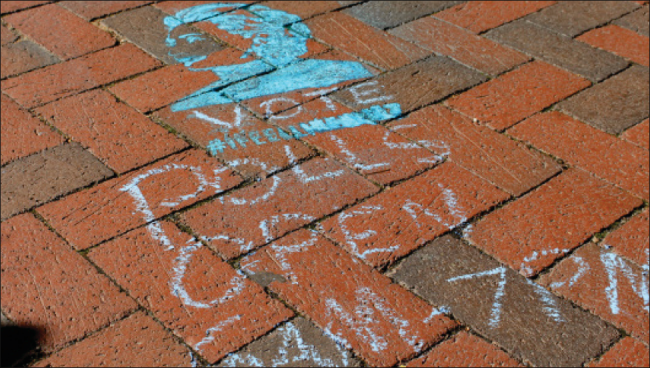 For some students, the U.S. presidential election today will be their first time voting. Others will not vote at all.

“My plan is to not go to a poll and not participate in the election,” James Crafford ’20 said.

Crafford said that he identifies as an independent, and if he were to vote third-party, he would vote for Green Party presidential nominee Jill Stein. However, he does not plan on participating in the election because he said the special interests of people in power have not represented the ideals of the United States.

“There’s no doubt that I care about the well-being of this country,” Crafford said. “I really do. But at the same time, when the two possible future presidents are either, kind of, cons or outlandish idiots, I don’t see a moral reason as to why I should have to choose between the two.”

Other students voted early by absentee ballot and said that they are nervously waiting for the final results. Alton Hipps ’20, a first-time voter, said that the thought of Trump winning the election is very nerve-wracking. Hipps voted for Clinton.

“It seems to be getting closer and closer between the two candidates, so that’s a little scary,” Hipps said. “After everything I’m seeing right now, I think I’ll be ok. But it’s a little nerve-wracking. [If Trump wins] I’d be in shock for a while. Moving to Canada is tempting. I don’t know, I hadn’t thought about it. I try to ignore it.”

Some students who don’t support Trump are choosing to cast their votes for third-party candidates because they do not want to support Clinton, either. Some are still undecided. First-time voter Cameron Terhorst ’20 said he is still not sure who he will be casting a vote for, but he does plan on voting.

“I’ll probably vote third party because I’m not a supporter of either of the primary candidates right now,” Terhorst said. “I don’t agree with Trump’s policies and I don’t trust Hillary due to recent events. Lying about the emails — that’s a big one, and her involvement with so many large corporations and banks, I feel like she’s definitely in their pocket and I don’t know if I trust her … she’s got a streak of not being honest.”

Terhorst said that while he is still not sure, he is most likely going to vote for Stein.

“I just agree with more of her policies than Trump, obviously,” Terhorst said. “I don’t feel like she’s going to win, but I feel like as with voting for third parties that it’ll have an influence over whoever the winning candidate is. I support some of the things the Green Party supports. I just don’t agree morally with either of the candidates so I can’t see myself voting for either. So ultimately it just comes down to me voting for the third-party candidate and hoping that that provides some kind of influence over whoever wins because I think they’re pretty progressive, and I’d like to see that have some sort of effect on whoever comes out on top.”

General Secretary of the College Socialists Nico Villarreal ’19 said he will vote for Stein, but he is displeased with the four main candidates on the ballot.

“While I do not think that Jill Stein would make for a good president, I’m not saying any of the candidates of the four parties, four national parties I should say, have good candidates,” Villarreal said. “I think I dislike Gary Johnson the most out of all the candidates. But basically I support Jill Stein full-knowing she will never become president, in fact in part because of that.”

Other students, like Chris Harrington ’20, are voting for Trump because they do not want to support what they see as Clinton’s corruption. Harrington said that if Clinton is elected it would confirm his suspicions about what she had committed.

“I would be really disappointed that we voted for corruption knowingly,” Harrington said. “If Trump wins, I’ll be content, because I voted for him after all, and I want to see him change what’s going on. But I don’t think he would win a second term. I think the Democrats would certainly field someone better next time.”

Harrington said that, while his vote for Trump was a way of showing of support for the Republican nominee, it was primarily a vote against Clinton, the Democratic party and the political elite as a whole.

“It’s more of a vote against Hillary Clinton,” Harrington said. “Hillary Clinton is the embodiment of everything that is wrong with our political system. She has ties with the Clinton Foundation that is questionable with money laundering, she endangered lives in America, she has brought down the Libyan regime which has ended in civil war. So she deserves a trial for things that she has done. So, that’s why, because having her rewarded for everything she has done is just un-stomachable for me.”

Looking toward elections results, Villarreal voiced concerns about the systems in place for running the United States elections, particularly the Electoral College, which he said is an outdated system.

Villarreal said he was worried because, since the polls he has watching have been tightening, he said it might be possible for one candidate to win the popular vote but lose the vote in the Electoral College, such as how Al Gore lost to George W. Bush in the 2000 presidential election.

“It may very well do lasting damage to the way that we conduct our elections and the stability of that,” Villarreal said. “Certainly this has been a long time coming. I think there’s been a lot of problems with the way we conduct our elections, they’re a bit archaic including the Electoral College. There are many ways for people to feel cheated and for them to have a semblance of a claim to actually having won when someone else takes the White House, which can be very dangerous just in terms of stability.”