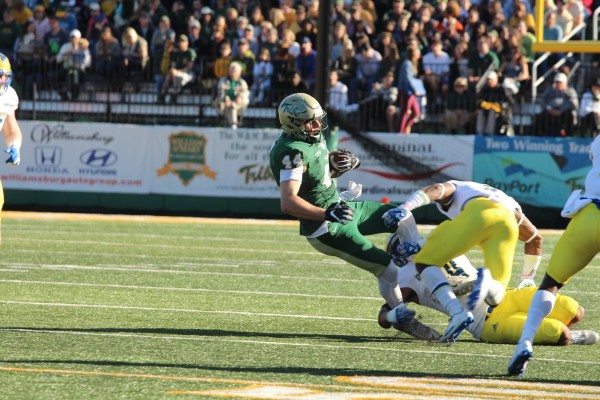 It was a tale of two halves.

Going into halftime against Towson (3-7, 2-5 CAA) Saturday, William and Mary (4-6, 2-5 CAA) was riding high, holding a 21-10 lead with momentum in their favor. After the break, though, the offense sputtered and the defense struggled and the College eventually fell 34-24 to the Tigers.

“It was like we were grasping for straws out there,” head coach Jimmye Laycock said to Tribe Athletics about the second half.

In the first half, the Tribe got out to a sizable lead, thanks in large part to senior quarterback Steve Cluley’s arm and senior running back Kendell Anderson’s feet.

It was like we were grasping for straws out there,” head coach Jimmye Laycock said to Tribe Athletics about the second half.

After an empty drive each for Towson and the Tribe, the College marched down the field on a six-play, 73-yard possession. Anderson took a handoff from the pistol, made a cut and ran untouched into the end zone to open the scoring with a 14-yard touchdown.

Towson responded with 10 straight points to take a 10-7 lead, tacking on a field goal and then a three-yard touchdown run. However, the Tribe would take control of the rest of the half. A 12-play, 47-yard drive, finished with a highlight reel play, gave the Tribe the lead back. From the 11-yard line, Cluley was flushed out of the pocket, turning all the way around to escape to his left. With pressure in his face, he lofted a pass into quadruple coverage in the back of the end zone, where sophomore wide receiver Jack Armstrong went up and came down with the difficult touchdown catch. With 6:50 left in the second quarter, the Tribe led 14-10.

Another pass from Cluley to junior tight end Andrew Caskin from 16 yards out, upped the Tribe lead to 21-10 going into the half.

“We played pretty well in the first half,” Laycock said to Tribe Athletics.

However, the second half did not go as planned for the College. Two plays within five minutes broke the Tribe’s back.

“We got rocked back by the kickoff return and the long run,” said Laycock to Tribe Athletics. “Those two big plays kind of did us in.”

With 14 minutes and 13 seconds left in the third quarter, Towson running back Shane Simpson took a handoff up the middle, spun off a defender and went 70 yards for the touchdown. Then, after a William and Mary field goal, the onside kickoff was returned 81 yards by Towson defensive back Keon Paye. Suddenly, after only five minutes and 38 seconds, Towson had tied the game.

Laycock was visibly frustrated when talking about the kickoff return.

“When you don’t tackle, you have a good chance of returning those,” he said to Tribe Athletics. “In fact, I don’t know if we would have gotten him down if we were playing touch on that one.”

When you don’t tackle, you have a good chance of returning those,” he said to Tribe Athletics. “In fact, I don’t know if we would have gotten him down if we were playing touch on that one.”

The Tribe was stunned, and their play showed it. The offense stalled and the defense could not stop the Tigers on their long drives. A fourth quarter touchdown and field goal for the Tigers gave them a comfortable 34-24 lead to hang onto and the Tribe sealed the result when Cluley threw an interception deep in Towson territory with a little more than five minutes left in the game.

“Towson played well, give them a lot of credit,” said Laycock to Tribe Athletics. “They played hard, they ran the football well, and they made plays.”

Cluley had a solid day, hitting 17 of 25 passes while throwing for two touchdowns. But it was a crucial interception that put the nail in the coffin of the College’s comeback attempt. While the interception was the final straw, the defense’s inability to force a Towson turnover did not help.

“We knew going in that we needed to get some turnovers and force some things,” Laycock said to Tribe Athletics. “Just didn’t happen our way.”

Despite the loss, one bright spot was Anderson. On his 27 carries, he ran for 140 yards and a touchdown.

“Kendell did just what he always does, he competes,” Laycock said to Tribe Athletics. “He always plays with a lot of effort and a lot of enthusiasm.”

Even with the strong performance from Anderson, the offense just did not have enough firepower to come back in the fourth quarter.

Next Saturday, William and Mary will finish its season at home against nationally ranked Richmond, with the game starting at 12 p.m.