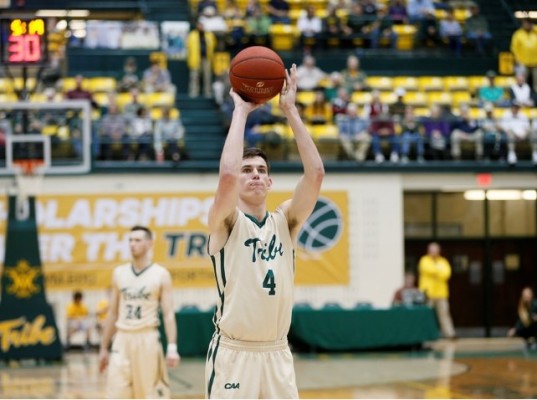 After blowing out Bridgewater at home to open the season Saturday, William and Mary experienced the flip side of the coin Monday evening, as the Tribe was soundly defeated on the road by No. 12 Louisville 91-58.

Despite the Cardinals (2-0) taking a double-digit lead early, the Tribe (1-1) played competitively with the hosts for the majority of the first half, cutting the deficit to three by the 2:13 mark. However, the College failed to score again before halftime, and Louisville regained momentum heading into the break with a 10-0 run to close the first half, leading 44-31.

The Tribe missed several close shots throughout the first half that could have changed the halftime outlook, struggling especially from three-point range. As a team, the College shot 5 for 16 from beyond the arc in the first half, 6 for 29 for the game, as one of the Tribe’s assumed strengths heading into the season became a weakness Monday night. Meanwhile, the Cardinals punished the College down low with superior length and athleticism, 26 of their first half points coming in the paint.

Louisville asserted its will in the second half, keeping its foot on the gas pedal as the Tribe lost steam over the final 20 minutes, the Cardinals winning comfortably 91-58. The College simply failed to execute on both sides of the court in the second half, shooting 7 for 30 from the field along with missing 10 free throws, while giving up 47 points. Shaver expressed disappointment in the second half effort after the game.

“I was not pleased with how we battled in the second 20 minutes,” he told Tribe Athletics. “Their pressure wore us out a little bit, completely changed the flow of the game really. For 20 minutes, we competed pretty hard, but this team’s got to learn to do things on a 40-minute basis.”

“I was not pleased with how we battled in the second 20 minutes,” Shaver told Tribe Athletics.

William and Mary will try to get back in the win column in its return to Kaplan Arena Saturday night when the Tribe hosts Presbyterian. Tip-off is scheduled for 7 p.m.