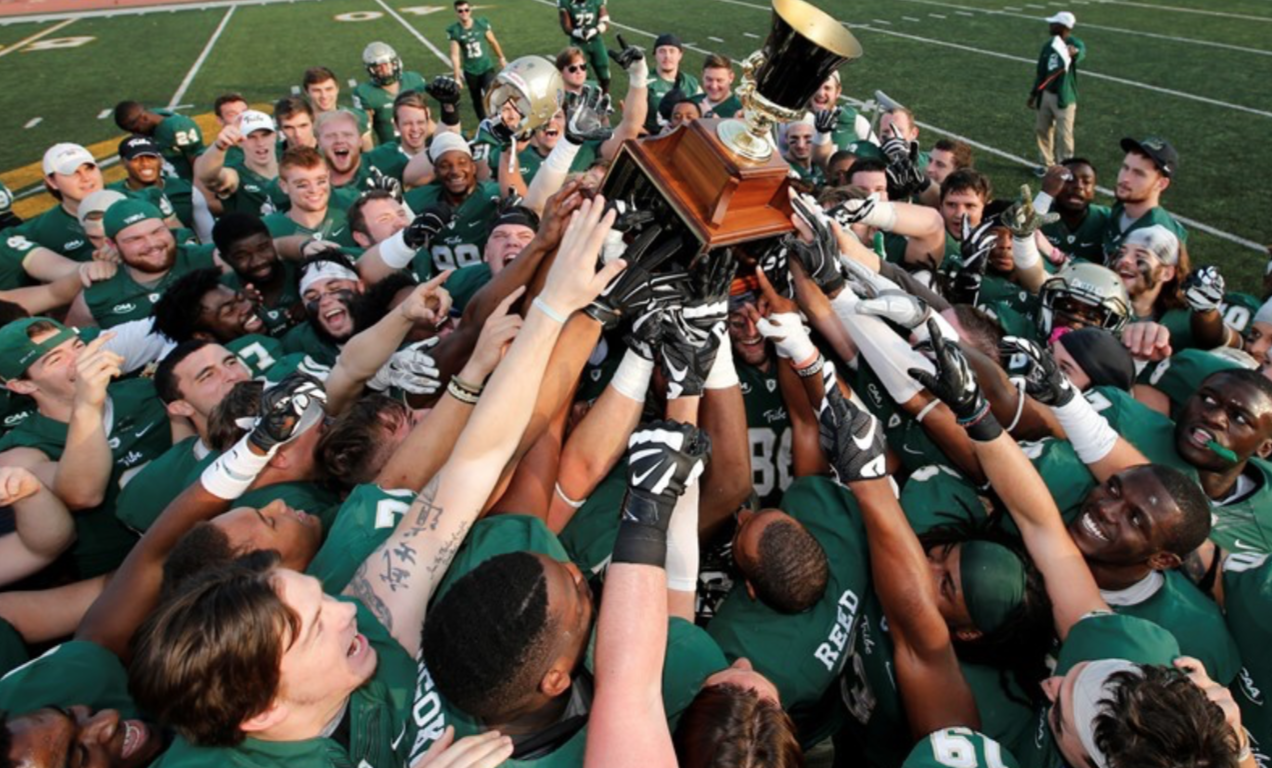 Senior running back Kendell Anderson knew running onto the field Saturday it would be the last time he would wear the green and gold in his playing career. Forty-two carries, 219 yards and two touchdowns later, Anderson had led William and Mary to a major upset in its final game of the season.

The Tribe beat No. 7 Richmond 34-13 at Zable Stadium behind a dominating second half and a grinding ground game. This is the first Capital Cup victory for the Tribe since 2011, when the Tribe secured a 25-23 win at Richmond.

Anderson, one of those seniors, demolished his former personal highs in carries, rushing yards, and all-purpose yards. He was named Most Valuable Player of the Capital Cup by members of the media.

“My mindset was, I’m not coming out and I’m giving it everything I have,” Anderson said. “I just tried to do that.”

Going into the game, few would have expected the Tribe to win in such a commanding fashion. However, the first play of the game was an omen of things to come. After the Tribe won the coin toss and elected to defer, the kickoff was fumbled by the Spiders. The Tribe came up with the loose ball at the Richmond 19-yard line. A few plays later, the College grabbed the lead on a 37-yard field goal from redshirt freshman kicker Kris Hooper.

Throughout the first half, the Tribe defense struggled to contain the Richmond offense. The Spiders’ second offensive drive was characterized by big plays of 21, 15, and 28 yards. It culminated in a five-yard touchdown run to give Richmond a 7-3 lead with 7:17 to go in the first quarter.

The next drive, the Tribe dodged a bullet when senior quarterback Steve Cluley broke away for a 10-yard rush but was shaken up on the play. Cluley left the game, but would return later in the drive.

Richmond would extend its lead to 10-3 in the second quarter before one of the most important plays of the game. With less than seven minutes to go in the half, Richmond quarterback Kyle Lauletta escaped the pocket and scampered up the middle for 27 yards, although the play was called back on offsetting penalties. However, Lauletta was injured on the play, and the Spiders were down their starting quarterback for the rest of the game.

“Obviously, they were limited with their quarterback going out. I mean that happens,” Laycock said. “They weren’t the same team without him, I’ll be the first to admit that, but we still had to play, and I thought we did very well.”

Before the half, Richmond kicker Ricky Segers hit a field goal to bring the score to 13-6 Spiders. The second half, though, would be a different story.

The Tribe received the ball to start the second half, and it took advantage of it. An eight play, 68-yard drive was capped off by a five yard touchdown pass from Cluley to junior tight end Andrew Caskin on fourth down. The extra point was blocked, and the Tribe were down 13-12.

On the second play of the ensuing Richmond possession, backup Spiders quarterback Jake Clise’s pass was batted around then intercepted by junior cornerback Aaron Swinton, his fourth pick of the Tribe’s season. The College would capitalize on the turnover, but not after another play that changed the course of the game.

After a couple of penalties, the Tribe faced 3rd and 30 from the Richmond 38-yard line. Cluley took the snap and was flushed out to the left. Looking for an opening, Cluley was clobbered by Richmond linebacker Justin Rubin, losing the ball in the process. The fumble was recovered by the Spiders and returned for a touchdown, but Rubin was flagged on the play for targeting, somewhat controversially. The penalty negated the score, gave the Tribe a first down at the Richmond 23-yard line, and disqualified Rubin. Two plays later, Anderson scored his first touchdown of the day from four yards. Cluley scrambled into the end zone for the two-point conversion to make the score 20-13 Tribe.

The following Richmond drive stalled, and the Tribe got the ball back with 5:51 left in the third. The Tribe took full control of the game, with a 14 play, 76-yard possession, spanning seven minutes and eight seconds over the end of the third quarter and the beginning of the fourth. On the drive, Anderson rushed 12 times for 59 yards, including the three-yard touchdown. With less than 14 minutes left in the game, the Tribe had put it away at 27-13, with a stout defense and a smashmouth offense.

“We were able to run the football, pick and choose a few throws here and there, but we pretty well controlled it,” said Laycock. “I think we wore them down. I really do. I think in the second half, our offensive line took control.”

Anderson added, “It’s hats off to big guys like [Jerry Ugokwe] and all the offensive linemen. I can’t do what I do unless they’re blocking well and they were blocking very well today.”

Cluley would add a touchdown pass with 1:55 to play to up the lead to 34-13. It was the culmination of a very solid performance in what had mostly been a disappointing senior season for the quarterback. His final line, 17 of 25 for 190 yards and two touchdowns, resulted in his highest passer efficiency rating of the season, 158.24.

Nevertheless, the day belonged to Anderson, who ended his college career in style.

“To finish the season off the way we did, and to have the game that I did, there’s no better way to go out,” he said. “I told everyone last night and today, I’ll go until I can’t walk. And now my legs are pretty tired.”