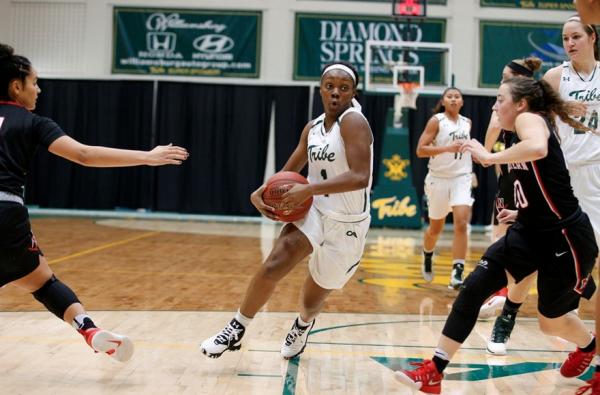 Preseason Colonial Athletic Association Player of the Year Precious Hall dropped 27 points, eight rebounds and four assists Sunday afternoon, leading James Madison to a 79-64 win over William and Mary in the first-ever Golden Game at Kaplan Arena. The loss was the fourth straight for the College, which fell 3-5 in conference play and 13-6 overall.

“Precious Hall did what she does,” he said.

Hall got off to a quick start, knocking down an early three and then hitting all three free throws after being fouled on a second attempt. Senior forward Alex Masaquel started hot for the Tribe, scoring six of the team’s first 11 points. Midway through the first period, the score was tied at 11. A quick 6-0 run from JMU (14-6, 7-2 CAA) provided some separation. The first quarter ended with the Dukes leading 21-17.

The margin remained around the same, and with just under seven minutes until halftime, the Tribe trailed 29-22. Senior guard Latrice Hunter entered off the bench to spark a quick 10-2 run, giving the College a 32-31 lead with 4 minutes, 15 seconds left in the half. Hunter had four points, an assist and a key offensive rebound during the run.

Clinging to a 34-33 lead, Hall reminded everyone that she was the best player in the gym, leading the Dukes on a 10-3 run to close the half, which featured five points in the final minute. With the halftime deficit 43-36, Swanson was not pleased with his team’s lack of cohesive defense down the stretch.

“In the first half we weren’t connected [defensively],” Swanson said. “We weren’t dialed in.”

In the fourth quarter, the Tribe applied full-court pressure, forcing several turnovers and closing the gap to six with eight minutes left in the game. Two clutch threes from JMU guard Hailee Barron ended the Tribe’s comeback attempt, resulting in a 79-64 loss, with the final margin due to eight made free throws from the Dukes in the final two minutes.

“Hailee Barron. You’ve got to give her a lot of credit,” Swanson said. “A couple of those threes were backbreakers in terms of late shot clock situations.”

Despite the four-game losing streak, Swanson was pleased with his team’s second half performance.

“I thought we did a better job in the second half,” Swanson said. “We played hard. Our post players, obviously, Alex and Abby [Rendle], had very good games.”

In the final quarter, Masaquel and Rendle combined for 18 of the team’s 20 points. For the game, Masaquel led with her fifth double-double of the season, finishing with 18 points on 8 for 13 shooting to go along with 12 rebounds. Rendle responded to not starting the game by pouring in 17 points on 7 of 9 shooting off the bench.

The team’s other leader, senior guard Marlena Tremba, struggled Sunday afternoon. She shot 3 of 15 from the floor and failed to connect on a triple in eight attempts. Despite the off night, Swanson wasn’t too worried about his star guard.

Getting Tremba back on track will be key to ending the current four-game slide. The Tribe looks to rebound Friday when it takes on Northeastern at 7 p.m.

“All teams go through tough slides,” Swanson said. “If this had been a couple years ago it would be more worrisome. We’re playing good basketball. We lost some tough games down the stretch.  I think we’ll rebound and come back re-energized.”