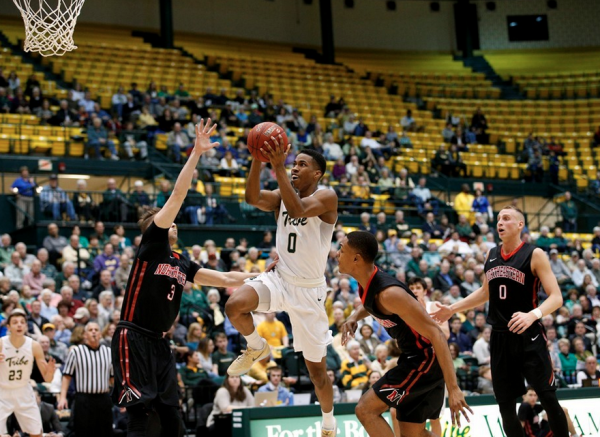 Thirty-two and six, twenty-eight and seven, twenty-three and six. While it’s certainly no LeBron-like 41, 41, triple-double, senior guard Daniel Dixon has established himself as the go-to player for William and Mary this season, leading the team and the conference with 22.5 points per game in Colonial Athletic Association play. Simply put, Dixon has been by far the most dependable player on a Tribe team that’s produced convincing wins followed by perplexing losses.

In the past 14 games, Dixon has led the team in scoring, culminating with the past three contests, in which he averaged 27.7 points, 5.7 rebounds and 3.0 assists while shooting an impressive 72 percent from three-point range. What did all this get Dixon? A second CAA player of the week award to add to his list of accomplishments in his final season in Williamsburg. But what did this do for the Tribe? Just a 2-1 record despite Dixon being the single best player on the floor for either team in each contest.

The script of Tribe basketball as of late has been relatively easy to follow. The College has won its last six home games, largely due to Dixon’s dominance — he led the team in scoring in five of those six — but also due to a strong home crowd and several strong performances from senior forward Omar Prewitt, who dropped 28 points to go along with Dixon’s 27 against first place UNC-Wilmington. But on the road, the Tribe has struggled mightily. The College has lost its past four road contests, and its last road win came on a ridiculous Dixon buzzer-beater three from way outside the arc. In other words, when Dixon’s game is closer to ordinary than extraordinary, the Tribe isn’t winning on the road.

After the recent road loss to Towson, the Tribe sits at a mediocre 7-5 in league play, deadlocked in a three way tie for third place in the conference, three games back from both UNCW and the College of Charleston. There’s work to do.

In the simplest terms, the College must accomplish two things to put themselves in a strong seed and on a hot streak to enter to CAA tournament. First, get Dixon some help. With defenses beginning to key on him, his teammates should be getting more open looks. Second, buckle down and win on the road.

Against Towson, the College led 61-45 with just over 14 minutes remaining. Less than four minutes later, the Tigers had rattled off an 11-0 run to cut the lead to five. Admittedly, Dixon struggled during the Towson run, going 0-3 from the floor. However, he simply can’t do it all. In a time when his shots weren’t falling, none of his teammates stepped up on the offensive end, and the result was a catastrophic stretch which ultimately allowed the Tigers back into the game and left them in perfect position to complete the comeback down the stretch.

As a team, the Tribe must improve its ball movement and get shots for everyone. In the last three home games, the College passed out 76 assists, but managed just 33 in the three most recent road contests. The away game passing woes are even more obvious when analyzing junior guard David Cohn’s statistics. In the three most recent home games, Cohn has racked up 19 assists, highlighted by an impressive 10 assist, zero turnover game against UNC-Wilmington; however, Cohn has managed just eight assists in the last three road contests. The low assist numbers are caused by the two aforementioned areas that the College needs to fix. With better ball movement comes more open shots. With more open shots, other players will step up and ease the scoring load for Dixon. As a result, the assist numbers will go up, and the Tribe will find itself in the away win column.

With six games remaining before the CAA tournament, the Tribe must continue their undefeated record at home and gut out wins in at least two of the three remaining road games to enter postseason play hot and ready to make a run. This year’s Tribe team clearly has the talent:  Dixon is having a phenomenal year, Prewitt is a reigning first team CAA selection, and Cohn is a crafty guard who has been the vocal leader of the team. Despite the road struggles, time remains for Prewitt and Cohn to reestablish themselves as leaders beside Dixon and make a run for the first CAA tournament title in school history.