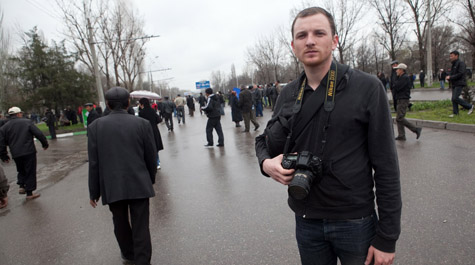 Washington Post political video reporter Dalton Bennett ’09 gave a talk on his time covering U.S. President Donald Trump as a presidential and primary candidate at the College of William and Mary on Tuesday, Feb. 14.

In his talk, Bennett briefly spoke about his time abroad and then described his travels around the United States on the campaign trail. He said he spent most of his time profiling Trump supporters in order to gain insight into why they were voting for him.

Government professor Ronald Rapoport introduced Bennett by talking about Bennett’s time in his research methods class. He said that Bennett went above and beyond for his assignments, including making trips to Guatemala and Honduras in order to conduct research. He also spoke about Bennett’s reporting in the Middle East during the Arab Spring and how he was shot at, beaten and deported.

Having covered these revolutions around the world and coming back here expecting calm, well he didn’t really get it,” Rapoport said.

“Having covered these revolutions around the world and coming back here expecting calm, well he didn’t really get it,” Rapoport said.

After graduating, Bennett worked in Central Asia covering revolutions and focusing on the region at large. Next, he found himself in the middle of the Arab Spring when he reported from Egypt and then from Libya for six months. After that, he became employed full-time with the Associated Press where he reported on an array of topics including the European financial crisis from Athens, Greece to the refugee crisis. He also reported from Ukraine from the beginning of the revolution there to the final battle. Bennett said that he was present for many of the foreign policy issues that came up during the election.

“[I had] the unique opportunity of riding shotgun through these moments of history,” Bennett said.

After these travels, Bennett said he saw an advertisement for a job at the Washington Post, which he immediately applied for. He said he thought it would be a dream to work for the newspaper he grew up reading. After he got the job, Bennett immediately started covering the presidential primary campaigns. He said he was appreciative of the chance to see parts of the country he otherwise would not have had an excuse to see.

“There is nothing like the campaign trail,” Bennett said. “It’s a mix between going on tour with a rock band and following around your favorite football team, it’s exhausting, it’s exhilarating, it’s stressful, every day is a challenge.”

During the primary Bennett said he had to confront his own prejudices. He recounted a story about meeting a man dressed like a cowboy outside a gas station who had written a song praising Trump. Bennett said his first instinct was to write this man off as a joke; however, after hearing his story about struggling financially and then coming home one night to find his son overdosed on heroin Bennett realized that Trump’s campaign gave him something to believe in when he was struggling.

“It was a way for him to breathe,” Bennett said. “This opportunity to be there where people are sharing their personal stories is really a reward and something I’m grateful for.”

After the Republican candidates began dwindling, Bennett said he had a gut feeling that Trump was going to win out over Ted Cruz, so he got together with his colleagues and they decided to go profile Trump and Hillary Clinton supporters from around the country.

Dalton profiled quite a few Trump supporters from a diverse spread of the United States but focused on a few that stood out to him. One of those was Gavin Garrett, a trucker from Mount Vernon, Ohio who was supporting Trump. Bennett drove with Garrett in his big rig from Hagerstown, Maryland to Ohio. During that trip, Bennett said that he learned about Garrett’s reasons for supporting Trump. He recounted Garrett’s story about being hit hard by the recession and starting to drive steel from steel mills around Cincinnati. Bennett said that Garrett began to notice these steel mills slowly closing and his livelihood shrinking. He said that Garrett was fighting for his family’s status in the middle class and thought that Trump would make his survival easier.

“The concerns Gavin has are night and day from ours,” Bennett said. “It’s not a matter of dreams and aspirations it’s ‘what can I do to survive.’”

Next Bennett related the story of two auto body shop owners from Atkins, Virginia. He said that one of them supported Trump while the other supported Bernie Sanders and they spent most of their workday debating politics. After speaking with the man who supported Trump and learning about the economic struggles they faced in Atkins, including factories closing and their main business of coal disappearing, he understood that these people were just trying to survive. He said people like this identified with Trump as someone who spoke like them and would stick up for them.

“What he taps into is this core disenchantment with politics,” Bennett said. “Somehow something just, clicked, just changed. His life and his community led him to support Donald Trump.”

“He sees aspects of his way of life under threat and he finds the nearest thing to blame it on,” Bennett said.

Sahil Mehrotra ’17 asked Bennett a question about whether Trump supporters would still support Trump if he did not accomplish everything he said he would or if they would simply blame it on the democrats in Congress. Bennett responded by saying that he should go talk to Trump supporters in order to find out.

If you listen, they will talk to you, it’s the funniest thing,” Bennett said.

“If you listen, they will talk to you, it’s the funniest thing,” Bennett said.

Bennett ended his talk by emphasizing the need for everyone to step out of his or her comfort zones in order to understand what is going on in the United States today.

“This election has brought up a lot of questions about where our country is right now,” Bennett said. “Your future is determined by the zip code you’re born in. People of color can walk down the street and be shot dead. Women earn less than men. What does it mean? The only way we can get to the bottom of it is by going out of our comfort zones.”