Home Latest News Faculty With one College student trying to re-enter the United States, others react... 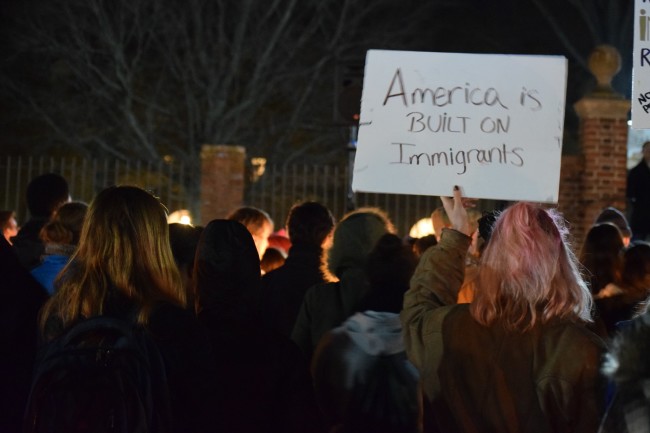 When President Donald Trump signed an executive order Friday, Jan. 28 suspending the Syrian refugee program indefinitely and banning immigrants from seven Muslim-majority countries for 90 days, students and professors at the College of William and Mary expressed surprise, outrage and curiousity.

The executive order does not apply to U.S. citizens or, as of Sunday, to U.S. permanent residents, also known as green card holders. The order does, however, target all other non-U.S. citizen categories. Refugee admissions from all countries are suspended for 120 days, and citizens from seven Muslim majority countries — Iran, Iraq, Libya, Somalia, Sudan, Syria and Yemen, whether refugees or otherwise — are barred from entering the United States for 90 days.

The list of affected countries originates from the visa waiver program, which allows citizens of over 30 countries to visit for short periods without holding a visa. Through legislation which was implemented by the Obama presidency, the visa waiver does not apply if a citizen of one of the 30 countries visited Iran, Iraq, Libya, Somalia, Sudan, Syria or Yemen on or after March 1, 2011. This same code is referenced in Trump’s executive order and determines the countries affected.

Trial judges throughout the U.S. have blocked key aspects of the President Trump’s executive order, allowing travel to resume Friday Feb. 6 and throughout the weekend. As of Monday evening Feb. 6, however, the Justice Department has recommended the federal appeals court to reinstate the travel ban component of the executive order.

Bünyamin Sevim ’19 immigrated to the United States from a Turkish village near the Syrian border with his family when he was only one year old. However, Sevim said he often returns to visit during the summers. In 2014, he and some friends crossed the Syrian border under the cover of night to volunteer in the city of Homs. Today, Sevim describes that city as a wasteland.

With the executive order in place, Sevim said his initial surprise is mixed with curiosity about what his American experience will be over the next four years. He said like everyone else, he is waiting to see how it plays out.

I’m kind of impressed with the ballsiness of Trump,” Sevim said.

Now that the green card holder ban has been lifted, Parsa Soltani ’20 said he supports the administration’s order.

“I think President Trump is doing us a great service in many respects by opening up a conversation that we’ve badly needed to have, especially since 9/11, which is that certain countries — take it from someone with family in that part of the world — certain countries do tend to produce a lot of problematic people,” Soltani said.

Of Iranian descent, Soltani still has several members of his dad’s side of the family in Iran, though he has not been in contact with any of them since the ban.

“I think this is one step to solving the problem, which is to show, until you get your act together, we’re going to restrict access of people until we know who we’re letting in,” Soltani said.

In fact, Soltani said he would like to see the ban extended to other countries.

The title of Trump’s executive order is “Protecting the Nation from Foreign Terrorist Entry into the United States.” Language in the order specifically highlights the national security threat posed by foreign nationals who entered the United States carrying visitor, student and employment visas following Sept. 11, 2001.

To government professor Debra Shushan, however, the order will make the United States less, rather than more, safe.

“One has to look no further than the reactions of ISIS-affiliated individuals who have welcomed Trump’s executive order as a ‘blessed ban,’” Shushan said in an email. “They are confident that it will bolster ISIS recruitment by lending credence to their narrative that the West is at war with Islam. Additionally, it will hamper our efforts to defeat ISIS by making Iraqis and Syrians less willing to work with American forces.”

Already, Shushan continued, the executive order is deeply affecting the lives of thousands without making anyone safer.
For some at the College, the executive order impacts them personally. According to Director of International Students, Scholars, and Programs Stephen Sechrist, five students at the College are citizens of the affected countries. Among them, four hold student visas, and one is currently abroad in his country of origin, unable to return to the United States.

“I actually spoke to the student at home yesterday, in part just to reassure him of our support for him, and we are exploring some different ways that we will be able to help him, in terms of returning to the U.S.,” Sechrist said. “I don’t know what will be possible before those 90 days, but we’re looking at different options and ways we can support him.”

According to the Institute of International Education, 17,354 citizens of the seven affected countries are studying at U.S. institutions in 2015-16, with 12,269 among them from Iran.

The length of a student visa depends on the reciprocity agreement between the United States and the other country. The dates of the program the student is enrolling in rather than the visa itself determines how long the student can stay in the United States. Sechrist likened a student visa to a student ID card — once you are in a building, you don’t really need it anymore unless you leave and want to return.

As of Trump’s announcement Friday, a student carrying a visa will not be authorized to return for 90 days. Moreover, the executive order has suspended the visa-granting program. U.S. citizens who travel between the affected countries, however, cannot be excluded from the country, and permanent residents can only be excluded on certain grounds. However, both groups can be subject to additional questioning at the port of entry.

After an initial frenzy that involved calling her parents and attempting to get into contact with other family members, Carima Nur ’19 said she and her family breathed a small sigh of relief when the order was found to no longer apply to green card holders.

Nur was born in the United States, but her father and mother are naturalized citizens born in Somalia. Her father travels back a couple times every year to visit members of the family who still live there, including his sister and brother.
To Nur, the executive order is about more than just a restriction on travel.

As a Muslim, she said she wonders whether the immigration act is about a general distrust of her religion under the guise of national security. However, Nur says she prefers to consider it as a symbolic issue — an example of a new president catering to his voter base.

According to Chair of Middle East Studies and Arabic Studies Professor Stephen Sheehi, however, the executive order is an unambiguous attempt by the administration to make a Muslim ban legal. As someone who studies the relationship between Western and Middle Eastern countries, Sheehi said that he considers the Trump administration to be archetypally Islamophobic.

“It’s a political attack to isolate Iran. It’s easy to beat up on Sudan and Yemen, it’s like [Trump] beating up on Mexico. It’s beating up on the weak guy on the block,” Sheehi said. “Clearly, there are a lot of other countries that people could identify, where quote-on-quote terrorism or Islamic extremism might come out of, notably Saudi Arabia, but Saudi Arabia is one of our most stalwart allies in the Middle East, so quite frankly … the list is partially capricious and partially demarcated by what the United States can do easily.”

One primary concern is that the administration will expand the list of affected countries to include other Muslim-majority nations.

As a Muslim and Pakistani-American, Zauhirah Tipu ’19 said she felt like the executive order demoted her to second-class citizenship. Although Pakistan is not currently one of the seven countries named by the executive order, Tipu said that she would not be surprised if it eventually made the list.

“I think [Trump will] definitely add more countries to the list. I think policies will get harsher, I think they’ll be enforced more strictly and I think maybe the pushback will take time — but eventually it will come through,” Tipu said. Sevim, who mentioned his initial surprise about the executive order, said he is less convinced that a pushback will come.
“I’m not very optimistic about the people in this country,” Sevim said. “I don’t really think they’re going to do anything besides tweet about it and maybe make a Facebook post. Maybe someone will gather on the Sunken Gardens, hold hands, and shout Kumbayah, but I think at the end of the day, nobody’s going to do anything real to oppose [the executive order].”

Sevim, who said he is critical of “armchair activists”, cited the massive demonstrations and direct show of force during the Civil Rights Era as the reason why African-Americans in the United States won the battle over civil rights.