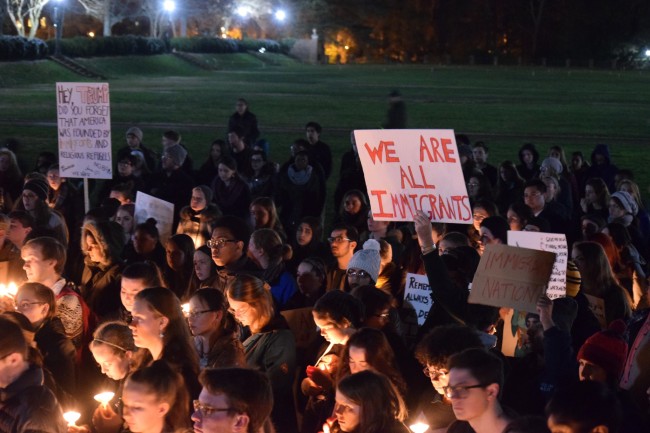 Screams filled the Sunken Garden right before 9 p.m. Thursday Feb. 2 as a speaker at the “No Ban in My Name” protest encouraged attendees to let out their rage.

This protest was held days after U.S. President Donald Trump signed an executive order temporarily banning immigrants from Iraq, Syria, Sudan, Iran, Somalia, Libya and Yemen from entering the United States for 90 days.
Local religious leaders, professors and students shared anecdotes about immigration, being Muslim and how this ban impacted their lives.

Audience members carried signs that said, “We Are All Immigrants” and, “Hey, Trump Did You Forget That America Was Founded by Immigrants and Religious Refugees?” 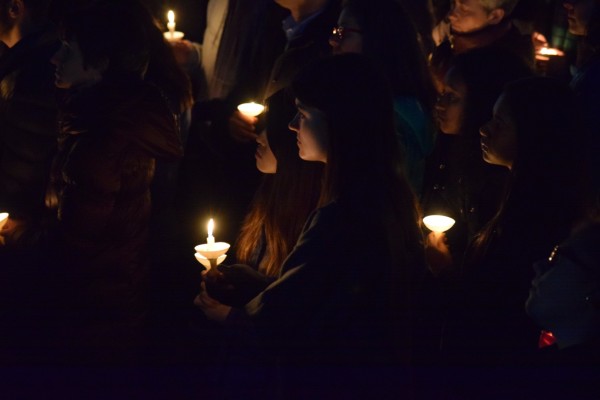 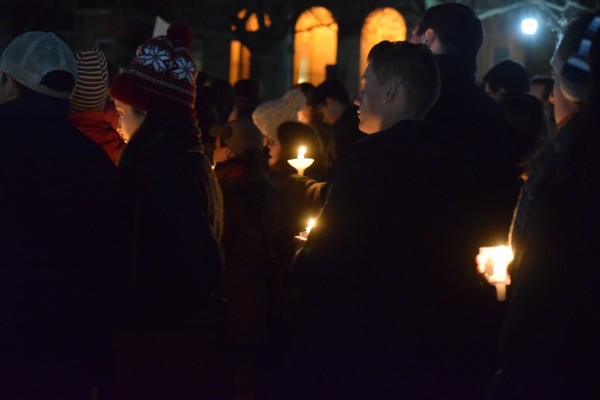 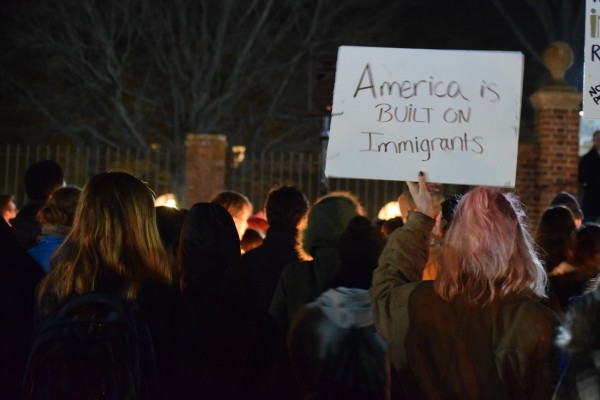 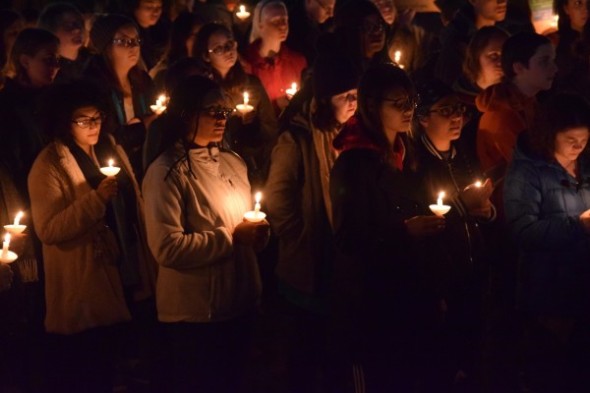 One student, Annika Hackfeld ’19, shared a letter she had written to her father, who she said supports the immigration ban.
One thing that Hackfeld discussed when reading this letter was the Jan. 29 shooting at a Quebec mosque that left six people dead. Fox News initially reported that the shooter was of Moroccan origin, and as of Thursday night’s protest, had not issued a statement regarding that error. Hackfeld said that she believed that this reporting strengthened the Trump administration’s support of the ban, citing when White House Press Secretary Sean Spicer said that it was a reminder of why “the President is taking steps to be proactive … when it comes to our nation’s safety and security.”

“I need you to see what I see. I need you to see what I see without assuming it’s my liberal education speaking or that I’m being naive,” Hackfeld said when reading aloud a letter to her father. “I need you to listen like when I cried growing up, like when people bullied me or friends abandoned me, Dad, the world is falling apart. I don’t know what you read every day, but I know it’s largely in support of Donald Trump … maybe now that he’s president you think things have changed. I’m not sure why you support him now … racism, sexism, Islamophobia, misogyny and xenophobia weren’t deal breakers to you.”

Hackfeld also said that she no longer feels safe in the United States because of some of Trump’s appointments to the National Security Council, including Trump’s counselor Steve Bannon.

“When Trump demotes generals and promotes [Steven] Bannon, a neo-Nazi who thinks Satan is a role model, to lead it [the National Security Council], I don’t feel safe in my country,” Hackfeld said. “Trump is misrepresenting America. I don’t know how many of the disproportionate number of white males in my government class believe I belong in this country.”

One of the first speakers at the event was Rabbi David Katz, who works at the Temple Beth El in the City of Williamsburg and volunteers with Balfour Hillel, the Jewish student organization at the College.

He shared religious verses from the Torah about helping oppressed individuals as well as a story from his family’s past. According to Katz, his great-grandparents illegally entered the country, and their family grew there.

One of the great legends of my family is about my great-grandpa Harry, who according to a story my mom told me over and over again, stowed away on a ship to enter the U.S.,” Katz said.

“One of the great legends of my family is about my great-grandpa Harry, who according to a story my mom told me over and over again, stowed away on a ship to enter the U.S.,” Katz said. “Grandpa Harry and Grandma Ruth had three children, eight grandchildren and 14 great-grandchildren, which makes us all descendants of illegal immigrants. A ban on a religious group could have kept all of us from becoming the contributing members of American society that we all are.”

He said that he believed the United States should be a place free of religious persecution and a place that is safe for immigrants from all countries.

Joining the religious leaders, students and professors was immigration lawyer Sharon Powell. During her time speaking, she worked to explain what the executive order explicitly means for students.

She urged students who felt unsafe to reach out the Reves Center for International Studies where the College has created a list of resources and facts about the ban.

As of last week, College spokesperson Suzanne Seurattan said that four students had been identified as directly affected by the ban. One graduate student, who the Reves Center has remained in contact with, has not been able to re-enter the United States after the ban.

Powell also worked to define what it meant to be a refugee and list out the process she characterized as “difficult” that an individual must go through with the United Nations to be legally considered a refugee.

One thing that she emphasized was that, although the ban targets seven Muslim-majority countries, it is not a complete ban on Muslim individuals.

“It is not a complete ban on Muslims,” Powell said. “This fact does not make the ban any less offensive or any less discriminatory against Muslims. To date, no other countries have been added to the ban. It’s good to know the facts.”