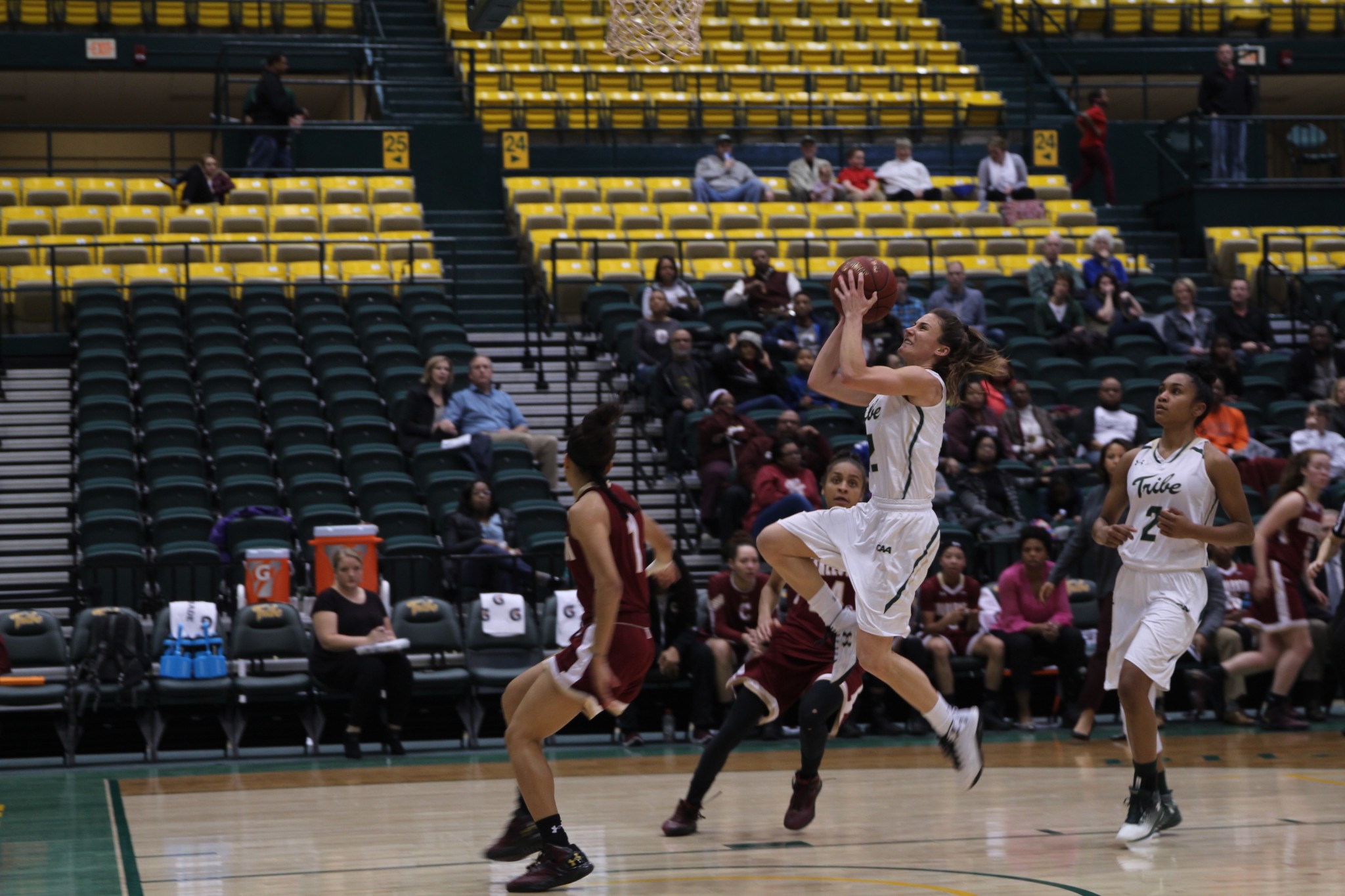 William and Mary welcomed Charleston to Kaplan Arena Friday night for an evenly-matched Colonial Athletic Association game. The match went into overtime before the Tribe (16-10, 6-9 CAA) fell to the Cougars (9-17, 6-9 CAA) 71-69.

In addition to leading the Tribe with a season high of 18 points, junior center Abby Rendle set the single-season school record for blocked shots with 89 thus far. The four blocks she added Friday night were matched by four from senior forward Alex Masaquel, who also added 16 points. Senior guard Latrice Hunter scored 15. At this point in the season, the Tribe is looking at all options to try to win critical CAA games.

“Everyone on the team is playing different positions now,” Hunter said. “You just have to be ready when your name is called just to be ready to play.”

Senior guard Marlena Tremba led the Tribe with four steals. The College started the game off strong with two good layups by Masaquel and senior forward Kasey Curtis. No lead in the first quarter was larger than three until the final minute when Charleston took a 17-13 lead.

The Cougars upped their lead to seven with a breakaway layup by Breanna Bolden, bringing the score to 22-15. The largest lead occurred with 2 minutes, 22 seconds left in the half 31-22 with Charleston leading by nine. The Tribe managed to close the lead to four by the end of the half thanks to a breakaway shot and free throw by junior guard Jenna Green and a layup by Masaquel with less than 0:30 remaining in the half. The score going into halftime was 31-27 in Charleston’s favor.

“I thought things changed with us in the last couple of minutes of the first half,” head coach Ed Swanson said. “I felt our energy level picked up, our body language changed.”

With five minutes left in the third quarter, the Cougars brought their lead back up to nine with a good free throw by Shiclasia Brown. This shot sparked a turning point in Tribe game play and the Charleston lead quickly depleted. A 13-0 run by the College followed, bringing the score to 44-40 and resulting in a four-point Tribe lead. Tremba, Masaquel and Hunter keyed this third quarter comeback.

The Tribe kept its lead through the duration of the quarter. The third quarter ended with the College up 46-43. A good shot in the paint by sophomore guard Bianca Boggs increased the Tribe lead to six with 7:30 left in the game. A layup by Rendle put the College up 58-51, a lead of seven points, its largest of the night.

A good jumper and free throw by Charleston’s Shiclasia tied the game at 60 with 0:19 remaining. The game went into overtime at the same score. Charleston’s Cailin Dorsey scored the first points of overtime with a good three followed by a Tribe layup in the paint by Rendle.

The score tied up twice in overtime, 67-67 with 2:04 remaining and 69-69 with 0:25 remaining. A good shot in the paint by Hunter tied the game up for the final time. The Cougars secured a final layup to bring them up 71-69. Rendle’s final shot was off the mark, securing the win for Charleston.

The Tribe’s shooting percentage increased from 34 percent in the first half to 48 percent in the second half for a 41 percent average, compared to Charleston’s 37 percent overall shooting average.

“Their rebounding wasn’t really the issue, it was our one-on-one defense at times, our team defense, that failed us at times. We let those guards just drive to the basket,” Swanson said. “Rebounding wasn’t the reason why we lost.”

The Tribe hits the road to take on Elon Sunday and will return home to welcome UNC-Wilmington to Kaplan Arena Feb. 24 at 7 p.m.