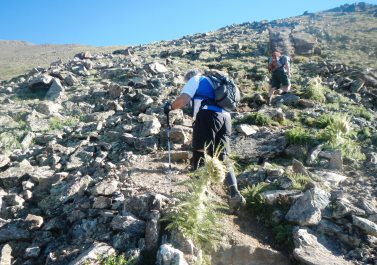 A researcher in the field of high-altitude sickness, a mountain climber and a collector of guitars — kinesiology professor Ken Kambis does it all. One of his current projects involves testing subjects at sea level and then seeing how they react to quickly entering a high-altitude setting. He conducts this research with the United States Army Institute of Environmental Medicine and works in its laboratory, located on the top of Pike’s Peak mountain in Colorado.

That laboratory, it’s been around for around 35 years, is one of the best in the world,” Kambis said. “We can fit 16 people there to study their responses to high-altitude exposure. After all, educating people is one thing. Trying to find a fix to reduce the severity of the response is something else.”

“That laboratory, it’s been around for around 35 years, is one of the best in the world,” Kambis said. “We can fit 16 people there to study their responses to high-altitude exposure. After all, educating people is one thing. Trying to find a fix to reduce the severity of the response is something else.”

When not at Pike’s Peak, Kambis spends his time conducting research in Adair Hall. He said he specifically works on high-altitude research with an isolation chamber called a normobaric hypoxia chamber, which sits in his laboratory.

“What we do is extract oxygen that enters into that chamber to a level that mimics the same partial pressure that oxygen would exert at a variety of altitudes,” Kambis said. “That chamber can simulate altitudes up to 25,000 feet. I’m continuing my research with USARIEM here with these simple non-invasive sea-level tests on campus.”

Kambis said that anyone who likes to travel to mountainous areas could benefit from breakthroughs in his studies.

“The key to avoid acute mountain sickness is to go up slowly, but nobody does that anymore,” Kambis said. “If you have a week off for break to go ski, you’re not going to spend three days climbing up slowly to adjust to the altitude. You’re going to go up immediately and try to get the most out of your break.”

Before studying altitude sickness, Kambis was an associate professor at the University of North Carolina at Chapel Hill, where he studied football injuries ranging from muscle overexertion to head injuries.

Kambis also said he is an avid mountain climber. He said he is especially fond of the 14,000-foot mountains, or “14ers,” in Colorado.

My last ascent was about two years ago,” Kambis said. “I injured my knee coming down a mountain about two years ago and had it replaced. That was part of the process of rehabilitating, which I’m still doing before I go back up there again.”

“My last ascent was about two years ago,” Kambis said. “I injured my knee coming down a mountain about two years ago and had it replaced. That was part of the process of rehabilitating, which I’m still doing before I go back up there again.”

Kambis mentioned that the last mountain he climbed is still officially unnamed. It sits on the south end of Mount Elbert, the tallest mountain in Colorado, and has the unofficial and unrecognized name of South Elbert. Kambis has, however, tried on two occasions to change the official name to either Mount William and Mary or William and Mary Peak.

“I was voted down by the committee in Washington both times, but I haven’t given up yet,” Kambis said. “I still plan to go back up there again, and I’m still looking at ways to make it official. It won’t be on any federally-recognized map, but we can call it Mount William and Mary as long as we want to.”

Kambis also said that he knew Jacob Moses “Jack” Borgenicht, a mountain climber who held the record for the oldest man to climb Mount Rainier. Kambis said that Borgenicht became an inspiration for his climbing career and research.

“Jack was a great man, wonderful personality and an all-around good person to be around,” Kambis said. “He’s the one who actually got me into high-altitude research. He was always in excellent physical shape and held his record for 12 years, I think. It was unbelievable.”

When he’s not climbing or busy in a laboratory, Kambis said he also has an interest in collecting guitars and has known professional guitar makers throughout his life. Two of his favorite guitars were made by the guitar maker Jimmy D’Aquisto, who was considered to be the best luthiers from the 1960s until his death in 1995.

“I actually knew Jimmy personally,” Kambis said. “He made a pair of guitars for me, and they were the only pair of guitars that he ever made that belonged to a set. I sold them a few years back but I’ve been trying to get them back ever since. I was able to buy one back, but I’m still working to get the other.”

Kambis also owns guitars autographed by musician Chet Atkins and guitar maker Les Paul. He said that he treasures these instruments but does not view them as the best in his collection.

“I’m trying to sell off most of my collection so I can buy back the other D’Aquisto [guitar],” Kambis said. “I have three Les Paul signatures, but two he autographed to me personally, which I can only sell to someone named ‘Ken,’ so we’ll see about that.”

Kambis said that mountain climbing gave him some of his best memories of his life. From experiencing spectacular sunrises to looking out across the Colorado landscape, he said nothing can ever compare to being on top of a mountain.

“I always tell my friends that the thing about hiking up to high altitudes is that it’s the only way you get to see some of the most spectacular sights in the world,” Kambis said. “You could fly, take a helicopter, but walking up a mountain and getting above timber line exposes you to an entirely new environment. I really encourage people who have thought about it to do it. Safely, of course.”