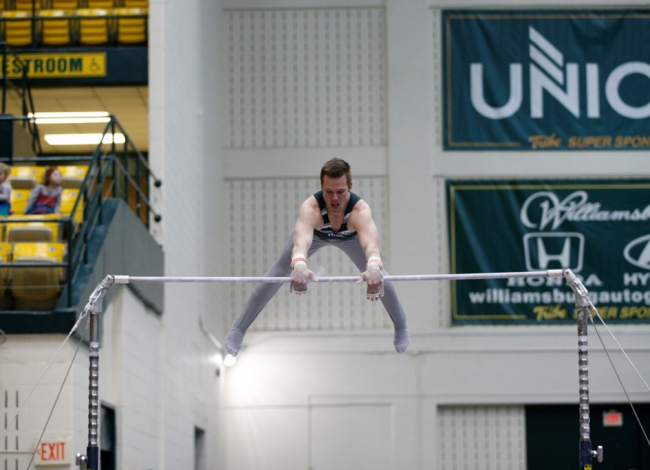 In an alternate timeline, senior Neal Courter could have been a black belt or a star BMX racer. Instead, he is up for the highest honor in collegiate men’s gymnastics and is an outspoken advocate for mental health awareness.

Courter said that part of why he competes for William and Mary is that gymnastics just happened to be the first sport his parents tried to put him in.

“I was a very active child, and my parents wanted to put me in a sport,” Courter said. “They were going to try BMX, taekwondo and gymnastics. They ended up trying gymnastics first, and I loved it from the start so I just stuck with it.”

At the men’s Senior Day meet March 18, interim head coach Mike Powell recognized Courter’s achievements in front of the crowd. Courter is one of eight finalists for the 2017 College Gymnastics Association Nissen Emery Award. This award is presented every year to a senior who demonstrates outstanding athletic achievement, sportsmanship and academic excellence. It is the highest honor in collegiate men’s gymnastics and is often referred to as the “Heisman Trophy of gymnastics.”

Courter said that the most important part of his Tribe gymnastics career has been his team.

“I really connected with the team as soon as I got here on my recruiting trip,” Courter said. “The ‘one Tribe, one family’ mantra holds true, for me at least. Everyone on my team has been there through the struggles I’ve had, including several bouts of depression, and they’ve been with me through that … They’ve been really supportive, and I think that’s a great thing to have a team like that.”

Courter has been open about his struggle with depression and how it has affected not only his personal wellbeing, but his gymnastics career as well.

Around his sophomore year he began really struggling with depression and then his senior year, took a medical withdrawal that he said was effectively mandated by the school. He said that it is important to him that people learn what resources are available to them on campus to help with mental health issues so that if they are in need, they can reach out.

“I think it’s important to talk about it and reach out to your resources,” Courter said. “If talking about my struggles can help even one person know that they’re not alone, then I’ve succeeded.”

Courter pointed out that one good thing that resulted from his withdrawal was giving him a new hobby that he said combines strength, flexibility and dance movements.

“One positive thing that came out of being medically withdrawn was being able to take an aerial silks class at home,” Courter said. “Since then I’ve been training on them with hopes of performing in Cirque du Soleil type productions in the future.”

Courter’s performance dreams don’t just include Cirque du Soleil. This weekend, the chemistry and French double major will fly down to Orlando to audition for a role in a Disney World production.

“I find out really soon if I get that job and that would be a dream come true to keep on using my gymnastics abilities after graduation,” Courter said. “My backup plan would be that I’ve applied to a program to teach English abroad in France, so I think that would be a really cool experience as well and maybe something that I would pursue after performing.”

In the meantime, Courter is still focused on competing with the Tribe. The team just returned from the USA Gymnastics Collegiate Championship hosted by the University of Washington March 24-25 and will be heading to Chicago to compete in the Eastern College Athletic Conference championship April 8.

Courter said that his favorite event to compete in is vault.

“It’s probably my best event, as well as my favorite,” Courter said. “It’s just a huge adrenaline rush. It only lasts about 10 seconds from when you salute to when you finish the vault.”

Courter’s experience vaulting for the Tribe is responsible for one of his favorite memories from his gymnastics career at the College. He was named a National Collegiate Athletic Association All-American on vault his freshman season and recalled being surprised and overjoyed upon seeing his score.

“I knew I had done a good vault, and then I was changing into my warmups and one of my teammates started screaming, ‘Neal! Neal! You did it!’ and I didn’t know what was going on or that I had placed so well and then I saw the score,” Courter said. “I just remember calling my parents and crying tears of joy because I never thought I would get there.”

Courter was sure never to highlight his own individual accomplishments without also talking about how important his team was to him.

He said that his All-American run on vault was tied with his memory of winning the ECAC championships as a team his sophomore year as his favorite Tribe gymnastics memory.

“It was a great thing just to be able to hit routines with my team,” Courter said. “It was so great to win that meet as a team and then compete in the NCAA championships as a team.”

He consistently emphasized the importance of his team’s support to his personal enjoyment of and achievement in the sport.

To Courter, one of the crucial things to remember about gymnastics is not just the physical strength and skill needed to hit routines and post high scores, but the mental strength that’s also necessary to make those achievements happen.

“You have to be at 100 percent on the day that matters,” Courter said. “It’s a testament to the mental strength that gymnasts have that they manage their lives outside the gym so that they are 100 percent prepared for competition day.”