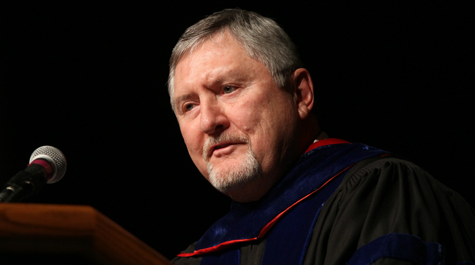 Sociology professor David Aday established himself at the College of William and Mary as a teacher without borders. From serving as the chair of the sociology department, to director of the American studies program, to his current position as a professor of sociology and community studies, Aday has worked for almost 40 years to build opportunities for students at the College to broaden their research and world perspectives.

“Some of my colleagues would disagree with me, but I believe that department chair is the best job on campus,” Aday said. “I became chair of the sociology department relatively early in my academic career, and I thoroughly enjoyed that role. While we never had — and still don’t have — the resources to do many of the imaginative and very promising things we’d like to do to advance teaching, learning and research, we are challenged to find ways to optimize the use of the resources we do have.”

Aday arrived at the College in the fall of 1978 and has held 14 academic leadership positions during his 39 years at the College. He currently holds four positions as professor of sociology and community studies, academic director of Students for Medical Outreach and Sustainability and Medical Aid Nicaragua: Outreach Scholarship, co-director of the public health program and liaison to the Commission on Colleges of the Southern Association of Colleges and Schools.

Without question, the most rewarding opportunities for me have come through my work with the student-initiated projects known as Student Organization for Medical Outreach and Sustainability and Medical Aid Nicaragua: Outreach Scholarship,” Aday said.

“Without question, the most rewarding opportunities for me have come through my work with the student-initiated projects known as Student Organization for Medical Outreach and Sustainability and Medical Aid Nicaragua: Outreach Scholarship,” Aday said. “More than 10 years later now, I’ve been the beneficiary of opportunities to teach, learn, conduct research, supervise research and work beside two truly remarkable [student organizations].”

MANOS, an organization founded under the supervision and guidance of Aday in 2007, helps students at the College work with the community of Chaguite in northern Nicaragua. Students then attempt to use sociology and public health research methods to improve community health. Members come from a wide range of academic backgrounds, including global health, neuroscience and finance. Aday says that this intellectual diversity proves that students in any field of study are welcome.

Its partner organization, SOMOS, founded its first free medical clinic in 2005, in the region of Paraiso in northern Santo Domingo. The students spent a single week in the Dominican Republic, diagnosing illnesses and handing out medicine in the community. Aday offered his support at the time and has remained a supervisor of SOMOS. Today, students in SOMOS focus their efforts on the issue of flooding in the Paraiso community and serve as representatives to a local community health committee. The ultimate goal of both organizations is sustainable community development — showing both communities how to identify and solve pressing health issues.

“From the beginning, we agreed that the primary focus of the projects should be on the benefits for communities rather than on the value of the experiences for students,” Aday said. “I hoped that they would develop an awareness of the risks of ethnocentrism and an appreciation for the limits of personal experience and common sense for understanding aspects of the world that are unfamiliar.”

SOMOS and MANOS were the first organizations of their kind at the College. Aday explained that when they began, the only hope was for students to learn to appreciate the complexities of poverty, injustice and poor health. Echoing the College’s own Thomas Jefferson, Aday also said that he hoped students would learn just how powerful knowledge is.

“My hopes have been fulfilled beyond my wildest expectations, partly because the projects have drawn extraordinary students and partly because working together, we’ve found ways to keep ourselves focused on the work at hand: partnering respectfully with communities to nurture and develop community-owned solutions to persistent health problems,” Aday said.

Compared to those [students] I had known in other universities, it was clear that William and Mary students were intellectually turned on,” Aday said.

“Compared to those [students] I had known in other universities, it was clear that William and Mary students were intellectually turned on,” Aday said. “They were welcoming and they talked with excitement about their research and teaching interests.”

Aday said he plans to stay at the College for a few more years and continue to work with the SOMOS and MANOS projects, although he said he is now optimistic that the organizations will have new faculty mentors in the near future. In retirement, Aday plans to travel more internationally with his family and devote more time to writing.

“In my view, being a university professor is a privilege nearly beyond compare,” Aday said. “I will miss my colleagues and the time I spend teaching, learning, thinking and imagining with students.”