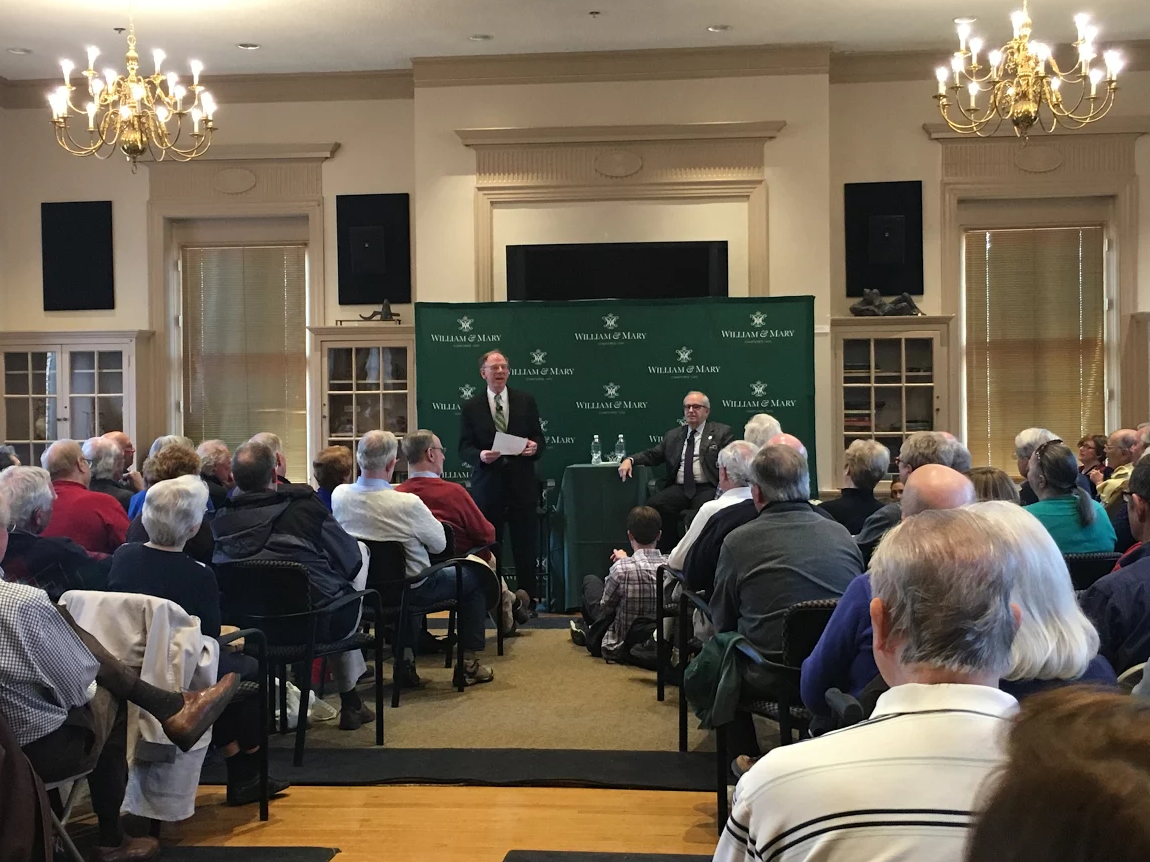 Norman Ornstein, a scholar at the American Enterprise Institute, a political columnist and an author, was selected as the 2017 Hunter B. Andrews Fellow in American politics. He lectured on the current state of politics March 22, 2017.

Ornstein is the co-director of AEI-Brooking’s Election Reform Project and is on the advisory board of the Future of American Democracy Foundation. He helped to draft parts of the Bipartisan Campaign Reform Act 2002 and was consulted on the writing of the American Anti-Corruption Act.

Government and public policy professor John McGlennon introduced Ornstein as one of the most prominent scholars in his field.

After completing his Ph.D., he quickly established himself as a leading scholar in congressional politics and a tenured professor at Catholic University,” McGlennon said. “From there, he went on to become a resident scholar at the American Enterprise Institute and a continuing informer of American politics through books, articles and essays.”

“After completing his Ph.D., he quickly established himself as a leading scholar in congressional politics and a tenured professor at Catholic University,” McGlennon said. “From there, he went on to become a resident scholar at the American Enterprise Institute and a continuing informer of American politics through books, articles and essays.”

Ornstein began his lecture by discussing the recent events in U.S. history, specifically the financial crisis of 2007-08, that led to the election of U.S. President Donald Trump. He credited the current political status to “angry populism” and “partisan tribalism” that flared after the recession of 2008.

However, Ornstein said that one of the most important factors in Trump’s election was party polarization.

“We have polarized, there’s just no doubt about that,” Ornstein said. “It was not symmetric. The Republican Party moved much further than the Democratic Party did, but the polarization was there. I’ve been around Washington [D.C.] long enough to see all kinds of polarizing and polarized figures who still manage to find coalitions that make policy.”

According to Ornstein, many shifts in party geography have led to this polarization. The formerly Democratic south was almost entirely “red” after the 2016 election, and the West Coast, formerly dominated by moderate, liberal Republicans is now the bluest region in the United States.

Ornstein said that these changes were due partially to natural phenomena, but they also resulted from people moving near those who share similar views and ideas.

“Increasingly we are living in places where we are surrounded by likeminded people, and it’s all reinforcing and we’re losing that sense of heterogeneity out there,” Ornstein said.

Among many developments that have shaped modern politics, he said advances in technology and social media have led to significant changes in elections and political campaigns.

Ornstein said that society’s constant connection to current affairs, both uplifting stories and those of violence and poverty, lead users of social media to become hardened against tragedy and less responsive to hate.

“When you live in a world where you not only have sources of rich information … but you are one click [away] from the worst violence that you can imagine, you deaden your senses and you coarsen your culture and now anything goes,” Ornstein said. “We have no sense of shame anymore, and that’s something that troubles me a great deal about these new media and about the nature of social media.”

He said that, given these conditions, the election of Trump was not surprising to him. However, he believes that Trump’s consistency in his actions before and post-election is shocking.

He discussed the changes a person undergoes after taking office. In many cases he has seen people change greatly under the stress and responsibilities of the presidency, but said he hasn’t seen the same changes in Trump.

I’ve gotten to know a whole lot of people, including some presidents … and what characterizes every one of them is they are transformed the moment they hear they won the presidential election,” Ornstein said. “We have the first president I have ever seen in my lifetime who has not changed one iota by becoming president and instead is doing everything he can to transform the presidency to fit his own personality.”

“I’ve gotten to know a whole lot of people, including some presidents … and what characterizes every one of them is they are transformed the moment they hear they won the presidential election,” Ornstein said. “We have the first president I have ever seen in my lifetime who has not changed one iota by becoming president and instead is doing everything he can to transform the presidency to fit his own personality.”

Trump is changing the office in many ways. One of the major changes Ornstein noted is his use of Twitter, but also his political rallies, his lack of knowledge of official intelligence reports and his request that policy recommendations be composed mainly of pictures and diagrams as opposed to written advice.

Ornstein also said that Trump is one of the first presidents not to rid himself of personal commitments upon taking office. Among Trump’s continuing financial obligations outside the White House are two major loans — one worth approximately $364 million to Deutsche Bank and the other worth $282 million to Ladder Capital.

Ornstein said Trump’s daughter, Ivanka Trump, should also be required to forfeit her interests alongside her father.

“By every legal standard, she’s supposed to divest herself of all of her business interests,” Ornstein said. “It’s not just the president, it’s the people around him. I’m skeptical that any of that will happen … The possible conflicts here, as they involve foreign policy or even domestic policy, are staggering.”

Despite the many issues Ornstein discussed surrounding Trump’s election, he said he praises the rise in social activism since Trump took office.

“There are a few hopeful things out there,” Ornstein said. “One is this jolted a lot of people into an activism that we haven’t seen before … What we’re seeing is a kind of social activism where people are stepping up.”

Karen McPherson ’69, an attendee and former teaching assistant for Ornstein, said the negative effects of Trump’s election do not outweigh the rise in activism.

After a lifetime working in the heart of U.S. politics, Ornstein said college campuses will be important grounds for promoting social change and resilience under Trump’s administration.

Promoting freedom of speech and embracing open debate will be the key to moving forward he said. Along similar lines, Virginia Governor Terry McAuliffe recently signed into action House of Delegates Bill 1401, which requires Virginia colleges and universities to guarantee freedom of speech to students, faculty and guest lecturers on campuses.

“I think we’re seeing on campuses now a real willingness in many cases to try and grapple with this great difficulty of what free speech means and what the First Amendment means,” Ornstein said. “The First Amendment was not designed to protect inoffensive speech; it was designed to protect offensive speech … I think a good part of what a campus can do is to make sure that you have closer relationships with people … having a debate and conversation, finding those spaces on campuses and also trying to build larger, diverse communities.”