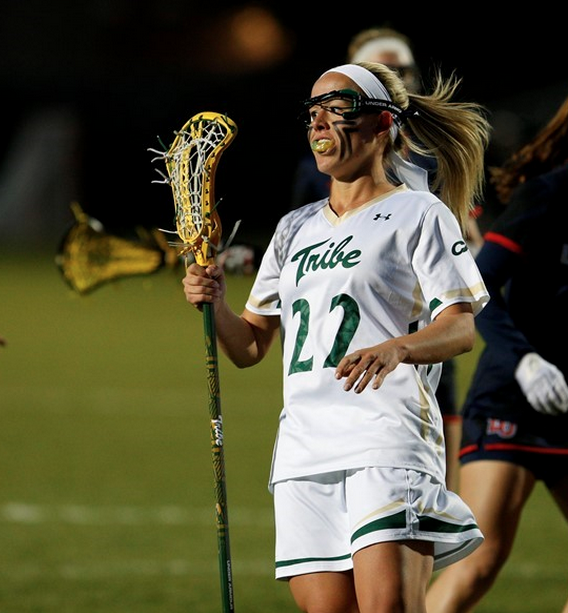 Looking to turn its season around, William and Mary started Colonial Athletic Association play this week. Friday, the Tribe took on CAA foe No. 14 Towson on the road. Sunday, the College traveled to Harrisonburg to match up with No. 18 James Madison in another conference game. Against Towson (9-4, 2-1 CAA), the Tribe kept the game close until a Tigers run put it out of reach late. The Dukes (9-5, 3-0 CAA) opened fast in the second game of the week for the Tribe, making sure the outcome was never in doubt.

Towson came into the Friday game looking to get back on the right track after a loss to James Madison, and so was the Tribe (3-10, 0-2 CAA) after a tough result against Richmond. Early on, the two teams looked evenly matched. The Tribe trailed through the first 20 minutes of the game but never by more than two goals.

A tally by senior midfielder Lindsey Jenks cut the Towson lead to just one, 5-4, with 10 minutes, 58 seconds left in the first half. That would be the closest the Tribe would get, as an 8-2 run by the Tigers spanning the end of the first half and beginning of the second gave Towson a comfortable lead that they would not relinquish. While the Tribe scored five of the last six goals, it was not enough, as it fell 14-11.

Towson edged the Tribe in shots, 33-25. The Tigers also took better care of possession, only committing 15 turnovers, while the Tribe turned it over 24 times. For the College, both Jenks and junior midfielder McKinley Wade had three goals, leading the way on offense.

Saturday, the Tribe took the field against James Madison, attempting to stop the bleeding after two straight losses. Unfortunately for the College, the Dukes came out firing. James Madison scored the first six goals of the game and eight of the first nine to jump out to an unsurmountable 8-1 lead, with the one Tribe goal coming from Jenks. The Tribe would score once more before halftime, on a shot by senior defender Abby Junior with 14 seconds left. It brought the halftime score to 8-2, with the Dukes in the lead.

The Dukes did not dominate the second half like the first; James Madison scored three goals and gave up three to the Tribe from Jenks, sophomore midfielder Holly Hager and junior attacker Meaghan Brophy. The six-goal halftime deficit was too large for the Tribe, though, and the Dukes cruised to an easy 11-5 victory.

Jenks had two goals on the day, totaling 32 on the season and extending her team lead to 10 over the next highest player, Wade. The Tribe as a whole had 21 shots — 14 in the second half — while the Dukes fired 28. 19 and 14, respectively, were on net for James Madison and the Tribe.

The College will return to Williamsburg this week to continue CAA play. Friday afternoon at 5 p.m., the Tribe will host Delaware at Martin Family Stadium. Sunday, the College will continue its homestand against the Drexel Dragons at 12 p.m.