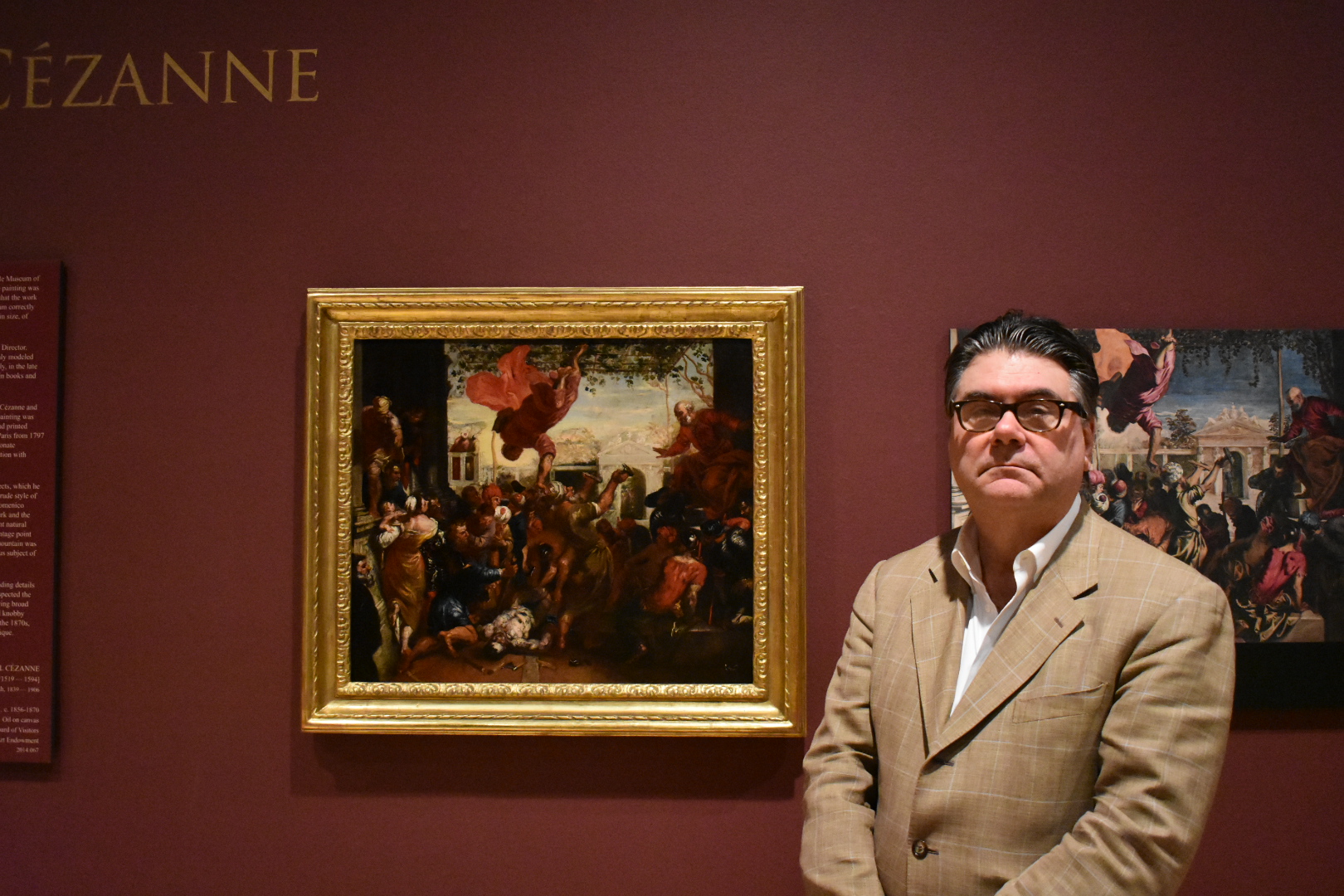 In 2013, an unattributed Paul Cezanne work stood for auction in Vienna, Austria. The painting is a copy of Tintoretto’s masterpiece “The Miracle of the Slave,” and was procured by the Muscarelle Museum of Art after Muscarelle Assistant Director and Chief Curator John Spike recognized it as an early work by Cezanne. The painting was displayed in the Muscarelle as part of the “Art and Science of Connoisseurship” exhibit that ran through Aug. 13, 2017.

When Muscarelle Director Aaron De Groft heard that Spike had discovered a Cezanne, it took him a moment to fully comprehend what Spike was saying.

I fully believed him based on that and my own experiences as an art historian and curator for almost 30 years,” De Groft said. “He was totally right and he had the exacting and previous experience [to] identify an early Cezanne …”

“I fully believed him based on that and my own experiences as an art historian and curator for almost 30 years,” De Groft said. “He was totally right and he had the exacting and previous experience [to] identify an early Cezanne …”

De Groft traveled to Vienna under the guise of already being in Europe and wanting to see a couple different works for sale. He had to be secretive about his real reasons for visiting the auction house because he believed he had discovered something no one else had.

“We had to develop a strategy to look at several of the paintings for sale, because as John put it, if we recognize it as what it is, someone else may as well,” De Groft said. “So we arrived from New York to [Vienna] specifically and only to see this painting with the backstory, or lie, that we were already in Europe.”

Once in the auction room De Groft and Spike hurried to find the Cezanne amongst many other paintings. The auction house had previously told them that this was a sale of fairly unremarkable paintings, so they were sure not to reveal their true purpose, De Groft said. Later that night they pretended to discuss buying several paintings to throw others off their track.

“They let us in, left us alone as they went to turn on the all the lights, and we scrambled to find the painting hanging amongst about 300 other paintings so we could see it just ourselves,” De Groft said. “When the lights came on we just acted as if we were just there waiting for them to return.”

Once back in Williamsburg, the secured Cezanne hung next to a print of the Tintoretto in the Muscarelle, showcasing the paintings’ obvious differences. The Tintoretto is complete and masterfully done, while the Cezanne is a loose interpretation of the scene that “The Miracle of the Slave” depicts. Cezanne painted this copy when he was a student, but even then he was making stylistic choices that allowed Spike to confidently assert that this is, in fact, a Cezanne.

“He has all these peculiar ways of doing things and that’s what I recognize. The thick strokes, knobby knees, the bunchiness,” Spike said. “The purpose of a copy is usually to give us another one … but this is an interpretation, an interpretation with a purpose.”

The Cezanne is a smaller and clearly less physically realistic work. Spike emphasized that this is Cezanne’s student work, but that his style is already starting to emerge. He said that Cezanne is looking to represent the scene in the painting in a different manner.

“If you’re new to this and don’t have a lot of experience you might say, ‘I don’t like it so much it seems so crude,’” Spike said. “Well, he doesn’t care that people will think he’s crazy.”

Spike said that Cezanne wanted to show all the facets of things and to see the world in terms of the cone, the cylinder and the sphere. In order to do that, he dramatized and exaggerated, making it easier to identify that the painting is his if you know what to look for.

“When he’s making this he says, ‘I’m trying to make art that is monumental, like the art of the museums,’” Spike said. “So, rather than these lovely effects of light, he’s trying to make them all solider and doesn’t care that he exaggerates.”

Spike was also able to identify a clue hidden in the painting that instantly revealed to him that it was, in fact, a Cezanne. Cezanne’s uncle, Dominic, is painted as one of the figures in this painting. Cezanne often used his uncle as a model, so his presence in the painting was a dead giveaway, Spike said.

“What you actually begin to realize is that this guy here is his uncle Dominic,” Spike said. “That was a big help, though, like, ‘thanks for putting him in.’”

Associate professor of Chemistry at the College of William and Mary Kristin Wustholz helped to further prove that “The Miracle of the Slave” is indeed a Cezanne through her work in the lab.

Cezanne has been one of my favorite artists since college, so I was thrilled that we might be working on one of his paintings!” Wustholz said in an email.

“Cezanne has been one of my favorite artists since college, so I was thrilled that we might be working on one of his paintings!” Wustholz said in an email.

Wusholtz used surface-enhanced Raman spectroscopy to identify various colorants in the work in her lab in the Integrated Science Center. The SERS process entails administering a drop of metal nanoparticles onto a very small sample of the artwork.

Wustholz’s students treated a sample from the painting with the nanoparticles and measured its SERS spectrum in the lab; however, Wustholz said that they were surprised when they could not identify one specific colorant.

“SERS gives a fingerprint of each colorant, so we were surprised when a microscopic sample from the turban area gave a spectrum that had no matches in our library,” Wustholz said. “Former M.S. student Kristen Frano looked at libraries of historic and modern colorants and found no matches.”

Wustholz and her students then turned their attention to early synthetic coal tar dyes, starting with Perkin’s mauve, or mauveine. Frano then made a sample of synthetic mauveine in the lab, and it proved the best match to the previously unidentifiable colorant.

This discovery was an integral piece of the puzzle, proving that “The Miracle of the Slave” is a Cezanne work by dating the piece to the late 1860s, during which time Cezanne would have been a student who was making copies from artists such as Tintoretto.

“I was surprised to come up with mauveine as the closest spectral match,” Wustholz said. “It was only used for a short period of time and there is no record of it being used as a pigment in painting.”

This is because mauveine, a colorant discovered by the Perkins family in 1856, was only in use for 10 years, since everyone stopped using it when they noticed that the color fades relatively quickly with time. Therefore, according to Wusholtz, this tiny patch of purple-red dye on the turban of a figure in the painting provides support to Spike’s conclusion that this is an early Cezanne.

“Knowing his work, I can’t even think in my mind, ‘how could anybody not see this?’” Spike said.

While Spike said that the painting is important in terms of understanding Cezanne as a developing artist, he also said that his copy of “The Miracle of the Slave” does not have the same significance that the Tintoretto masterpiece does.

“The Cezanne does not have one percent of the importance of the Tintoretto,” Spike said. “[The Tintoretto] is a breathtaking Venetian masterpiece 10 feet wide with all these huge figures, and [the Cezanne] is a fascinating study exercise by him.”

However, De Groft said that he believes that this find is incredible on its own for its teaching abilities.

“It is fantastic and maybe the find of a career,” De Groft said. “These are amazing teaching tools for our students to understand connoisseurship and research.”