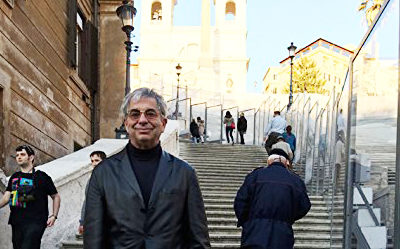 Colin Sargent, a poet, playwright, novelist and founder of Portland Magazine, began teaching English at the College of William and Mary just this semester, but he is already inspired by the rich history and traditions that he has observed while on campus.

I am having the same kind of exceptional feeling when I’m on campus, the kind of mystery that maybe only a stranger can get excited about because you already know about it,” Sargent said.

“I am having the same kind of exceptional feeling when I’m on campus, the kind of mystery that maybe only a stranger can get excited about because you already know about it,” Sargent said.

Sargent was born in Portland, Maine in 1954 and graduated from the United States Naval Academy in 1977. After graduation, he edited the Navy and Marine Corps Aviation Safety Magazine, ‘Approach’, before returning to his hometown of Portland and founding Portland Magazine in 1985. The motto of the monthly magazine is “extraordinary perspective,” and Sargent said that it is partly his experience growing up in Portland and wanting to further understand this extraordinary piece of geography that led him to found the magazine.

“I grew up in Portland, Maine and as a senior in high school I was at some sort of awards ceremony and the person beside me said, ‘I’m leaving Portland forever because the largest skyscraper on the Portland peninsula is Maine Medical Center, where we’re all going to die.’ Portland Magazine is an argument against that, it overarches time,” Sargent said.

Sargent said that another reason why Portland inspires him is that it is isolated and a little strange, topics he touches on frequently in his writing. He said “Portland can’t be reduced to lobsters and lighthouses,” which echoes his novels, in which he writes about people who the world has attempted to pigeonhole.

“I love studies of absence, most of my writing focuses on people left out, sometimes left out of what they call the ‘great conversation,’ Sargent said. “I’m always searching after the beauty of the exile. I think that everyone on reflection can articulate some way he or she doesn’t fit into a pattern and my heart always goes out to those individuals … In so many stories the main character can be identified as someone who breaks out, even accidentally, of the pattern of expected.”

Sargent’s debut novel, “Museum of Human Beings,” explores the adult life of Jean-Baptiste Charbonneau, the son of Sacagawea. Sargent said that he wanted to write about Jean-Baptiste because he had only ever been shown as an infant in Sacagawea’s arms and Sargent was curious about the adult Jean-Baptiste. He said that the world was only comfortable with Jean-Baptiste as a baby and so the adult man had to convince himself there was more to life than who he was at 20 months old.

“[I wanted to write about Jean-Baptiste] because he’s left out of the story,” Sargent said. “Sometimes it’s only fiction that can let unusual voices be heard. Jean-Baptiste Charbonneau was a metaphor for America because America had to grow up too. In many ways Sacagawea was America’s first working mom and her son Baptiste was America’s first child star.”

“There are so many people culture encourages to be sad because they’ve grown out of their snapshot moment,” Sargent said.

Sargent also researched reading as an out-of-body experience. He became interested in this when he observed that sometimes people became so engrossed while reading that they have to be shaken to come back to the real world.

“And I know you’ve seen, when you see a reader engrossed in a story where they’ve slipped out of their body, because it’s an out-of-body experience to lose yourself in fiction that sometimes or even a great newspaper article, sometime you have to shake a person to awareness to bring them back to their body while they’re in this altered state of being a reading human,” Sargent said.

Sargent then discovered that there is an actual state of being that readers can go into, called homoglens, or the reading human. Sargent completed his Ph.D. from Lancaster University in cognitive literature to study this concept thoroughly. He said he wanted to understand what makes readers enter this state so that he could become a better writer. Sargent said he always wanted to ground his research in something he was writing so that he could feel he was a part of the research.

“I realized what I really love is the daring of readers who dare to shapeshift into and become part of the story they’re reading,” Sargent said. “So I realized that I think people suspending their disbelief and going through a portal into a story is one of the best, magical acts that we’ve been able to put together as humans.”

Sargent said that his experience at the Naval Academy also shaped his writing, and some of the things that he saw while flying he is still “coming to grips with” as an author.

I think that everybody has an interior life and flying lent itself to being a writer,” Sargent said. “I flew over a forest fire, not able to help anyone and it looked beautiful, like a horrible matador’s cape and so I can still see some of the things that I saw while flying.”

“I think that everybody has an interior life and flying lent itself to being a writer,” Sargent said. “I flew over a forest fire, not able to help anyone and it looked beautiful, like a horrible matador’s cape and so I can still see some of the things that I saw while flying.”

Sargent majored in English at the Naval Academy and wrote poetry all through college. He also published his poetry while getting his degree, and had the opportunity to go on television and read some of his poetry while in uniform.

“I was called the poet pilot because people just needed a handle for me and there were plenty of people around ready to step forward and say I was neither a poet or a pilot,” Sargent said. “And so I think I was starting to reconcile those two ideas way back then.”

Sargent said that this merging of ideas, ever present in life and in his work, is present at the College as well and part of the reason he enjoys his time here.

“I think everyone has a sense of a life unlived and it’s a real pleasure to be with the English department,” Sargent said. “What struck me when I went to the convocation is that William and Mary is intertemporal, where the present, past and future somehow occupy the same space so it’s this convergence of different overlays that is exciting to me.” 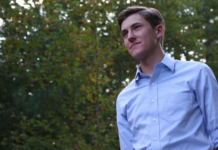