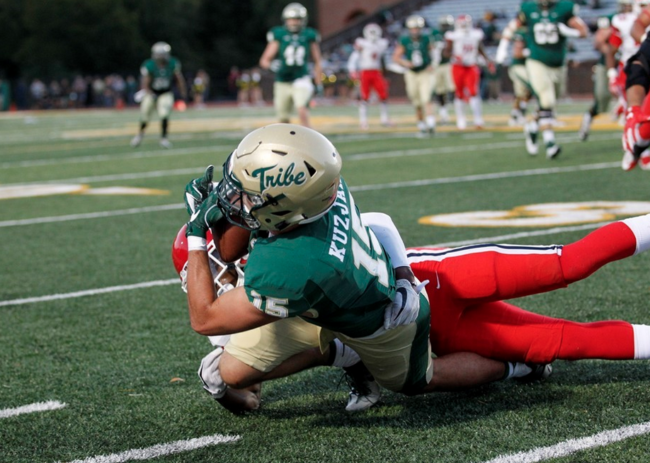 The resiliency of  William and Mary was both admirable and remarkable Saturday night against Stony Brook in the College’s Colonial Athletic Association home-opener. However, the Tribe’s hard-fought comeback after a sluggish start ultimately was not a recipe for success for the College.

Zable Stadium was dead quiet, some people walking toward the exits, and the College seemed to be headed for an ugly home loss against CAA foe Stony Brook. With a little more than eight minutes remaining in the third quarter, the Tribe had just fallen behind 21-0 to the Seawolves after a 61-yard touchdown pass from Stony Brook quarterback Joe Carbone. Despite forcing two turnovers in the first half and moving into the red zone once, the Tribe offense had looked dreadfully ineffective and was still scoreless. Coming back from a 21-point deficit seemed to be an insurmountable task for the Tribe.

Then a crazy thing happened — slowly but surely, the College began a comeback. The defense, which has been the strength of the team in the first four games, stepped up and brought the Seawolves’ offense to a grinding halt. This allowed the Tribe offense to finally get a foothold in the game and slowly chip away at the Seawolves’ lead.

The Tribe had its second long drive into the red zone, but once again it was unable to get the ball in the end zone. This time, sophomore kicker Kris Hooper’s kick sailed through the uprights to get the College on the board. On that drive, the coaching staff let junior quarterback Tommy McKee air the ball out downfield. He attempted passes on the first six of the nine-play scoring drive. In total, he was four for seven passing on the drive, and all four completions were for at least 12 yards. This allowed the Tribe to take its first step toward a comeback, even if the College was unable to come away with a touchdown on that drive.

After a three-and-out by the Seawolves, the Tribe suddenly had a ton of momentum, and the crowd was getting back into the game. McKee once again aired the ball out to move the Tribe down the field, this time extremely efficiently. McKee went 4-4, for 64 yards. After a 15-yard facemask penalty on the Seawolves, McKee completed a 21-yard pass to sophomore wide receiver Chris Conlan in the back of the end zone for a touchdown. The crowd rose to its feet and roared its approval as Hooper’s extra point split the uprights to bring the Tribe within three points with just under eight minutes left in the game. In 15 minutes, the College had shown its grit and taken chances in order to give the Tribe a great chance to win the game in the closing minutes.

While this 21-18 loss is heartbreaking for the Tribe, especially because of how close it came to completing the comeback and the bizarre fashion in which the game ended, there are positives to take away from Saturday’s conference loss to the Seawolves. The Tribe offense, which was awful and ultra-conservative in the first half, came to life in the last 20 minutes of the game. McKee showed he has the ability to make big plays and keep fighting through adversity. While he made a couple of mistakes, he was also a huge part in the Tribe’s comeback. The College’s defense also allowed the offense to get back on the field more often and kept the Tribe in the game when the offense was stagnant. Some fans gave up on the Tribe when it was 21-0, but no one on the home sideline gave up. The Tribe continued to play aggressively and showed a belief that it could come back to win the game, which it almost did.

However, falling behind early and having to play from behind is a recipe for disaster. Despite a valiant effort and brilliant play on both sides of the ball at times, the Tribe still could not erase the deficit against the Seawolves. Stony Brook is a good team, but it is certainly not the best that the Tribe will play in a tough conference schedule. If the Tribe falls behind to national powerhouses like James Madison and Richmond, it will be hard-pressed to get back within striking range in the fourth quarter. The College must open up the playbook for McKee early and allow him to lead his offense. The Tribe has to try to get a lead to put pressure on its opponents. If not, the College will find it difficult to win games in the CAA. This team is resilient, and I admire that, but the Tribe cannot expect to fall behind early and come out on top at the end of the night.