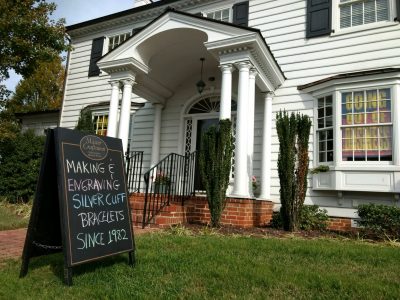 Thursday, Nov. 2, after 35 years of business in the Williamsburg community, the Master Craftsmen Shop on North Boundary Street announced that it will be closing its doors.

The shop, which sells bracelets to the College of William and Mary’s sororities annually, is closing due to owner and operator Holly Shields’ decision to retire.

I’ve tried to sell it for a while and not had any takers, and just had to make the decision of whether to continue or retire,” Shields said. “And I am just ready to spend more time with friends, and travel, and enjoy what’s left.”

“I’ve tried to sell it for a while and not had any takers, and just had to make the decision of whether to continue or retire,” Shields said. “And I am just ready to spend more time with friends, and travel, and enjoy what’s left.”

Shields opened the store in 1982, when she and her then-boyfriend — who worked as a swordsmith in Colonial Williamsburg — decided to start their own business. Her then-boyfriend’s job provided contacts with pewter spinners, making jewelry an easy business to expand into. The idea, and the store, continued after the relationship ended, and the business has succeeded.

Shields grew up in Williamsburg and knew that she wanted to open the business near the College.

The shop changed locations three times over the years. It began near the Flower Cupboard, also on North Boundary Street; it then moved to Richmond Road, near Tribe Square, before settling on its current location in 2007.

It was the College and the locals that provided the main draw for placing the shop in Merchants Square rather than another area of Williamsburg, such as New Town.

Chair of the Economic Development Authority Adam Steely believes that the Master Craftsmen Shop is a great example of a unique local business.

“They’re a strong representative of the kind of handcrafted, individually made crossover of art and retail,” Steely said. “And that’s a really great blend for a unique shopping environment like downtown Williamsburg.”

The EDA is made up of seven local business owners who volunteer their time. The authority aims to support existing businesses and draw new businesses to the area.

“We don’t try to open businesses, we try to facilitate other people [doing so],” Steely said.

Steely, who owns the Blue Talon Bistro on Prince George Street, said he understands Shields’ decision, but said that the Master Craftsmen Shop’s closing is “a shame,” and that he will miss it.

“Those unique, locally owned, artisan-based shops bring the life and breath into a community,” Steely said. “However much I love shopping at Williams-Sonoma, there is nothing uniquely Williamsburg about that experience.”

As of now, the EDA has no other businesses that it’s scouting to replace the shop. The EDA has no program to seek out business owners, and instead must wait for someone to come forward with an idea. However, Steely hopes someone will see the closing as an opportunity.

Shields is also optimistic about her retirement. Although she said that she is somewhat sad about having to close the shop, the community response has been gratifying, as many people have shown their enthusiasm for the shop.

We have been so overwhelmed,” Shields said in response to a phone ringing during the interview. “The response has just been amazing.”

“We have been so overwhelmed,” Shields said in response to a phone ringing during the interview. “The response has just been amazing.”

As stated on the Master Craftsmen Shop’s Instagram, the store will be closing “over the course of the next several months.”

“I’m sorry to have to stop, but I’ll always remember everybody, and how much I enjoyed it,” Shields said. “But I’m optimistic about my future too.”