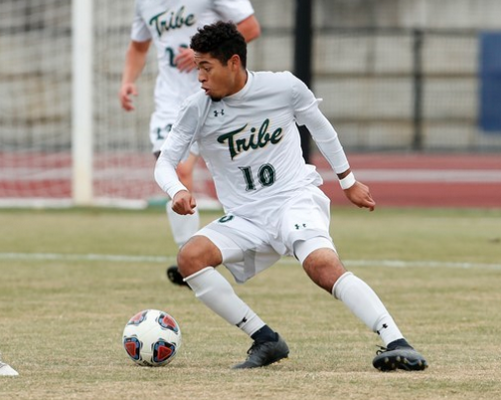 In the 25th minute, junior forward Ryder Bell fired a shot toward the goal that rebounded off the near post into the center of the six-yard box. Sophomore midfielder Reeves Trott netted the rebound for the game-winning goal.

Redshirt senior goalkeeper Phil Breno made a total of three saves, which kept the College in the lead.

With one minute remaining in the match, the Dukes earned a corner kick and placed the pressure on the Tribe defense as they sent all their players into the box in a last-ditch effort to drive one home. The College cleared the ball to senior forward William Eskay, who dribbled the ball toward an empty net before taking a long-range shot and finding the back of the net. This goal, however, did not count toward the Tribe’s victory because the goal occurred after time had expired.

The College outshot the Dukes by a narrow margin of 9-8 over the course of the match. The Tribe put six out of the nine shots on target as opposed to the three on target from its opponent.

The Dukes had a total of seven corner kicks, which the Tribe’s defense successfully defended against, maintaining the shutout necessary to advance to the finals.

The Seahawks earned a free kick in the 25th minute and were able to capitalize on it. Forward Julio Moncada took the kick and placed it in the top left corner of the goal. The Seahawks held this lead as the game moved into the second half.

In the 54th minute of the game, sophomore midfielder Julian Ngoh fired a shot into the bottom left of the goal from just outside the box. The goal was assisted by Bell and marked Ngoh’s second goal of the season.

This was the first goal in a four-goal run by the Tribe. The remaining three goals in the sequence were netted by junior forward Antonio Bustamante.

Bell had his second assist of the afternoon in the 66th minute of the game with Bustamante’s first goal. Bustamante collected the ball from a saved shot before burying it in the net.

The game-winning goal came in the 76th minute of the game. Redshirt junior Graham Guidry intercepted a Seahawk pass and crossed it to the center of the field. Bustamante, anticipating the cross, was wide open, ready for the ball and registered his second goal of the afternoon.

Bustamante’s third and final goal of the match came in the 78th minute of the game. Eskay lofted the ball toward the goal and Bustamante volleyed the ball into the back of the net.

The Seahawks continued to fight back and were rewarded in the 90th minute of the game with a goal from midfielder Matt Gameforone. The shot, taken from the 20-yard line, marked the final goal of the season for the Seahawks.

This CAA Championship victory marks the first time since 2010 that the College has clenched this title. The Tribe has now extended its undefeated streak to 10 matches.

Redshirt senior midfielder Riley Spain and junior fullback Remi Frost and Bell were all named to the CAA All-Tournament Team.

Moving forward, the Tribe will go up against Columbia Thursday Nov. 16 at 7 p.m. in its first round in the NCAA College Cup.